Transporting animals across the country for a rescue or a better chance at adoption isn’t new. Countless animals have been transferred from cruelty cases, overwhelmed shelters or natural disasters. In the past, groups would organize truck transport and plot a course. The challenge, though, was that their destination had to be within a day’s drive. If you pulled dogs from Florida, placement in Washington or Oregon was out of the question, says Kimberley Alboum, shelter outreach and policy engagement director for the Humane Society of the United States. “Then along comes Ric.”

“Ric” is Ric Browde, a songwriter, record producer and author who is president of Wings of Rescue, an organization that flies pets out of disaster areas or to parts of the country where they’re more likely to be adopted. Initially, the organization relied on volunteer charter pilots and their personal planes to transport eight to 10 animals at a time. As the need for transport grew, Wings of Rescue adapted. By chartering cargo planes and partnering with cargo companies, the organization can now move hundreds of dogs and cats at a time.

The results are lifesaving. The group’s capacity to fly large numbers of animals makes it possible to quickly move hundreds out of harm’s way.

To Alboum, it’s also the perfect answer to one of animal sheltering’s current problems. In some parts of the country, shelters have implemented spay/neuter and other animal welfare management practices so effectively that their facilities are no longer crowded with adoptable animals. Some have the space to pay it forward, taking in animals from areas that are still overwhelmed or dealing with a disaster. For example, if you take a group of hounds from Louisiana to Massachusetts, where hounds are scarce, those dogs have an exponentially better opportunity to find a home. The receiving shelters then have a greater variety of dogs available, keeping shelters more appealing as sources for a new pet and cutting into the puppy mill market. Plus, animals with a great back story tend to fare better, because adopters feel they become part of the story by providing the happy ending.

Long-haul transport by any means can be stressful for animals, and it’s also challenging for caretakers because dogs have to be walked every few hours. To ensure the animals’ comfort, organizations transporting by semitrailer must create staffing and driving schedules that work around these issues, often limiting trips to eight hours. But for many journeys, eight hours just isn’t long enough. Air transport changes the game, making that 1,500-mile journey from Louisiana to Massachusetts more doable. Plus, the high-volume flights can be a better use of human resources than smaller flights with fewer animals.

Having reliable air transport has also helped Alboum expand the HSUS Shelter and Rescue Partners program, a nationwide network that coordinates placement of animals from cruelty cases and disaster areas. The network was put to the test last year. As the Humane Society of the United States coordinated the rescue of hundreds of dogs from South Korea’s dog meat trade, hurricanes hit the U.S. and its territories—one right after the other. “We were moving thousands of animals,” says Alboum. “We had all these partners around the country who were like, ‘Don’t worry about it—just send us a plane full of animals and we’ll take care of it.’”

Lynn Olenik, executive director of Humane Animal Welfare Society in Waukesha, Wisconsin, recalls how her organization evolved into a transport hub during the hurricanes. “We got a call from the HSUS. Then we got another. And another. I think in all we did five or six transports just from the emergencies.”

Olenik’s organization is a Shelter and Rescue Partner hub, a shelter with capacity to take in high volumes of animals in times of need. The Humane Society of the United States and Wings of Rescue arrange a flight—handling logistics, physical resources (such as crates) and funding—then hubs take over, coordinating medical care and disbursing the animals among shelters or foster families.

It shows the power of what can be accomplished when people and organizations work together.

Hubs play an enormous role in the animal air shuffle. In the wake of Hurricane Harvey, the Humane Society of Tulsa in Oklahoma served as a receiving and redistribution center for animals evacuated by ground transport from Texas. Tulsa provided medical care and quarantine, then Wings of Rescue flew the animals to their destination shelters. Partnerships forged among Texas and Oklahoma organizations during the disaster have stayed strong, and the Humane Society of Tulsa now serves as a permanent transport hub and source of relief for areas of Texas where pet overpopulation and disease are rampant.

Oklahoma is getting a boost from the effort, too. Tulsa receives Texas pets and prepares them for air transport, then adds its own shelter pets who would have a better chance at adoption elsewhere.

“It shows the power of what can be accomplished when people and organizations work together,” says Gina Gardner, president of the board of directors for the Humane Society of Tulsa. Olenik agrees, noting that the flights have helped unite shelters and rescues throughout the region in a shared cause.

“We’re good at doing things on short notice,” says Davis Green, director of cargo operations for Berry Aviation in Fort Lauderdale, Florida. Contracting with Wings of Rescue, the air carrier has played a major role in the development of air transport for shelter pets. Its eight planes—each capable of carrying more than 200 animals—were kept busy during the 2017 hurricane season.

Eduardo Burgos, a career aviator and Berry pilot, remembers getting the email announcing that the company would be flying to Puerto Rico to rescue animals in the wake of Hurricane Maria. It was a far cry from one of his usual runs flying car parts to an assembly plant.

“I was the first to volunteer,” says Burgos, who was born and raised in Puerto Rico. “[Green] told me it could be days, or it could be weeks. I told him I’ll do it as long as we need to.” 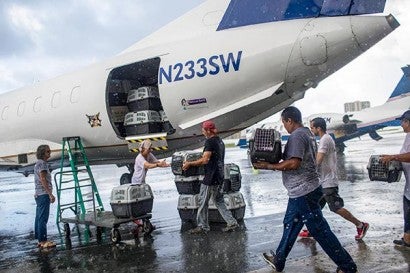 For most of October, Burgos and other Berry employees worked overtime to assist with saving Puerto Rico pets. Their help extended to humans, too. Every morning, the flight crew, along with volunteers and staff from animal welfare organizations, loaded pallets of pet food, first-aid kits, water and other supplies donated from all over the country. “People would sometimes just show up at the airport with supplies because they knew we were flying to Puerto Rico,” says Burgos.

The pilots took off early in the morning for the three-hour flight to Puerto Rico, dropped off the supplies, then loaded up the waiting animals rescued by the Humane Society of the United States and other organizations. “We tried to make it as smooth and quick as possible. The plane is air-conditioned, so it’s comfortable. Most of them would fall asleep,” says Burgos.

Sometimes he flew animals from Fort Lauderdale to receiving hubs, such as St. Hubert’s Animal Welfare Center in Morristown, New Jersey, which took in most of the evacuated animals. Burgos recalls the befuddled voices of the air traffic controllers he coordinated with in-flight. “Am I hearing barking in the background?” he was asked more than once.

The pilot says he’ll always remember his hurricane experience, and he hopes to work with Wings of Rescue again. “I got to see a whole different side of animal adoption and how many organizations there are that really care for animals.”

Some of Burgos fellow pilots were so touched by the experience that they took home “souvenirs,” adopting some of the dogs they helped rescue.

In the aftermath of Hurricane Maria, Wings of Rescue also helped reunite pets and families who had become separated during evacuation. Watching those reunions at the Fort Lauderdale airport was an experience Browde will never forget. 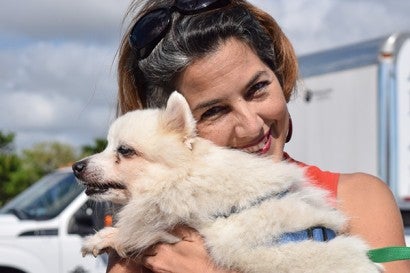 A woman hugs her dog after the pair were reunited in Florida after Hurricane Maria hit their home in Puerto Rico. Wings of Rescue and the Humane Society of the United States collaborate on large transports like this one before and after disasters.
Ric Browde

“When the dogs were coming [off the plane], it was like the Beatles had landed. We’d pull one out and people would shout, ‘That’s my dog!’. . . The joy was incredible.”

One reunion stands out. Browde noticed a boy in a wheelchair. His mother said he’d been despondent for the month since his family had been evacuated in the storm.

“I come out with this dog crate and the crate is sounding like a drumbeat, the dog’s tail is wagging so hard,” says Browde. “I open the crate door and [the boy] sees the dog. He grabs my arm, he grabs his mother, and he starts crying and talking. The whole family was crying. That’s the power of a pet.”

As for the other evacuated pets, most of whom came from overburdened shelters on the island, many quickly found homes with the help of the Shelter and Rescue Partners program. Browde says that in 2017, the average length of stay in receiving shelters for animals on Wings of Rescue flights was only three and a half days.

It’s hugely satisfying knowing that an animal you’re flying out of an area could be on someone’s couch by the weekend, says Browde. Alboum agrees. “Every adoptable animal in a home—that’s what we all want.”