Out of the cage, into the future

Editor's note: Shortly after this issue went to press, Mexico banned animal testing for cosmetics. We've updated the number of countries with such bans in the copy below.

When Julia Fentem began her career in toxicology around 1990, there was one government-sanctioned way of proving cosmetics safety and one way only—animal tests. In order to show regulators that non-animal tests—ones that used human cells—worked, Fentem still had to harm animals: She injected chemicals into rats, killed them and looked at the changes in their liver enzyme levels.

Now Fentem serves as vice president of the Safety and Environmental Assurance Centre at Unilever, a partner with Humane Society International and the Humane Society of the United States in ending the use of animal tests for cosmetics safety worldwide. At Unilever, she focuses on “next-generation” risk assessment, which relies on more than 50 non-animal methods that are more humane, more popular with the public and much better at predicting effects on people.

“Humans are not rats,” says Fentem. “If you want human relevant information, you need to get as close as possible to a human being.”

As of this year, 42 countries have ended or limited cosmetics testing on animals. In 2013, the 28 nations in the European Union—the largest cosmetics market in the world—became the first. The Humane Cosmetics Act, expected to be reintroduced this year in Congress, would ban the manufacture and sale of animal-tested cosmetics in the United States, the world’s second largest market. Seven states have now banned the sale of animal-tested cosmetics—California, Hawaii, Illinois, Maine, Maryland, Nevada and Virginia.

In May, China introduced a long-awaited process for exemptions from mandatory animal testing for the majority of imported cosmetics. 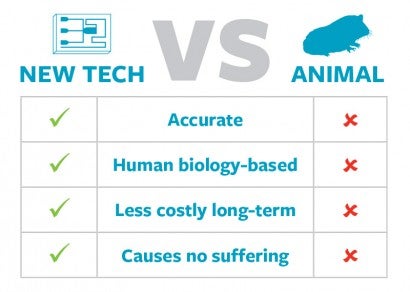 Change has been a long time coming for the untold number of rabbits, rats, mice, guinea pigs and hamsters who still suffer and die worldwide each year in cosmetics safety tests.

Two of the most common animal cosmetics tests were created during the 1940s by a U.S. Food and Drug Administration scientist named John H. Draize and his colleagues. Researchers put chemicals in the eyes and on the skin of restrained rabbits and score for redness, swelling, ulcers, discharge and bleeding. At the end of the tests, the rabbits are killed. Despite vast advances in biology, Draize tests have been used around the world well into the 21st century.

That’s a message that HSI, the HSUS and partners such as Unilever in the United Kingdom and Biosolution in South Korea keep repeating even as some government agencies resist change.

South Korea restricted the sale of newly animal tested cosmetics in 2016, and the nation’s Ministry of Food and Drug Safety has funded the development of the country’s own 3D cultures of human cornea and skin (see graphics) since 2009. But animal testing is still preferred to non-animal alternatives by most central ministries, says Borami Seo, senior policy manager for HSI/Korea. HSI is working with National Assembly members, ministry staff and industry representatives about non-animal tests and organizing political and scientific conferences to promote the new technology.

It’s an immense amount of cruelty, and it’s completely unnecessary.

In the European Union, the cosmetic regulation that banned animal testing is being undermined by the European Chemicals Agency, which is attempting to force manufacturers of cosmetic ingredients to carry out new animal tests using the authority of the EU’s chemicals law. Some of the tests being demanded consume thousands of animals each, and the agency’s chemical registration database lists more than 3,000 substances with cosmetics uses.

“It’s like a tick box,” says Fentem. “It will translate into millions of animals being used unnecessarily.”

Unilever and HSI are speaking out against this change, along with their partners in the Animal-Free Safety Assessment Collaboration, says Catherine Willett, HSI senior director for science and regulatory affairs. AFSA members are creating case studies that show how non-animal alternatives could be used to replace every animal test being reintroduced.

For her part, Fentem is convinced that long-term there is no going back. Young toxicologists at Unilever these days have backgrounds in computational biology. When researchers on her team wanted to determine the safety of the same chemical she injected into rats in the 1990s—cumerin—they did so by observing its effect on human genes and proteins (and won an award). No one is trained in animal testing anymore. 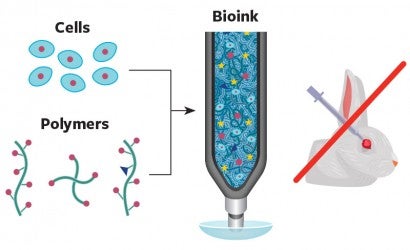 Bioink containing human cells is printed in the shape of the eye’s outermost layer.

Starting in the 1970s, researchers began to do toxicology tests on human cells instead of live animals. Rather than forcing cosmetic ingredients into the eyes of rabbits and watching for damage such as corneal ulcers, researchers now observe the effects of chemicals on bioprinted human corneas created from lab-cultured cells.

Animal tests required shaving rabbits to expose the surface of their skin to chemicals. Non-animal tests measure the effects of chemicals on human cells.

Draize skin irritation tests of cosmetic ingredients on rabbits are being replaced with tests of chemicals on the outermost part of human skin, the epidermis, and the deeper level called the dermis. Cultured cells are bioprinted into the skin’s different layers. In a related transformation, skin sensitization or allergy tests that applied chemicals to the ears of mice are giving way to in vitro tests on cells and computer modeling. 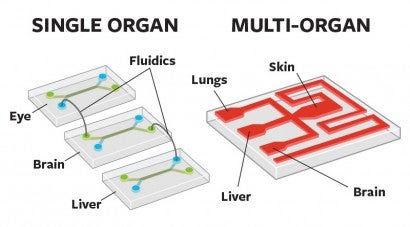 C. Organs on a chip

Toxicity tests for cosmetic ingredients that used to be performed on mice and rats are now done on miniature simulations of human organs grown on silicon chips—the cutting edge of non-animal testing. Using these, researchers can see what changes chemicals might cause in the functioning of individual organs, such as the liver, lungs and brain, and in systems of organs.

Computer modeling shows what happens not only to the skin cells first exposed to chemicals but to other organs and the entire body.

Since the 1990s, vast improvements in molecular and computing technologies have enabled researchers to look at what chemicals do to the body at the molecular level of RNA and proteins. Computer simulations of biological pathways—the chains of events that occur in the body when a substance is applied to the skin—combined with in vitro testing are replacing traditional skin sensitization tests on mice and guinea pigs.

Urge your federal legislators to support the Humane Cosmetics Act.