Around 2014, Kristie Middleton walked through a cafeteria at the University of California, hoping to see students chowing down on some of the healthy plant-based options she was encouraging food service providers to adopt. Middleton, then with the Humane Society of the United States, figured that there’d be plenty. This was, after all, super-progressive Berkeley, and the school offered students lots of vegetarian and vegan fare, including an organic salad bar. But that was not what students had chosen. All Middleton saw on plates were french fries and chicken nuggets.

“I was expecting plates of colorful food,” she says. “I saw lots of brown.”

It was then, Middleton says, that she realized getting people to adopt humane diets would take more than tasty meat-free recipes. If she was going to change the way people ate, it would require plant-based alternatives that resembled what they were already eating. In a country where every year people consume more and more industrially raised, incredibly cheap chicken—half of it in highly processed, breaded pieces—that meant inventing a plant-based “chicken” nugget that could go head-to-head with the real thing. 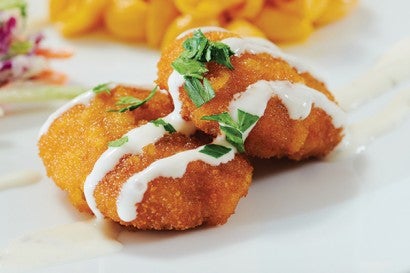 So Middleton teamed up with HSUS Washington state council member Christie Lagally, joining her plant-based chicken company, now called Rebellyous. Their first product, designed for the food service market: a medallion-shaped nugget made of wheat protein, canola oil, vegan chicken flavor, spices and corn and wheat breading. Their first customer: the Swedish Health Services hospital in Seattle, which now serves 125 pounds of the Rebellyous nuggets a week at the same price per ounce it charges for chicken strips. “They cooked up easily and held very well,” says corporate executive chef Zachary Schwab. “Crispy on the outside, the middle juicy.”

In 2019, as the soy-based Impossible Burger debuted at Burger King locations across the country and McDonald’s announced it would test the pea-based Beyond Meat burger at locations in Canada, Rebellyous was producing just 150 to 200 pounds a week of its new nugget, selling everything it could make. But the company, which had just moved out of a shared kitchen and into its own facility in West Seattle, was pursuing big dreams—to build a flagship plant that can turn out 18 million pounds a year, to open additional factories in states that have highly automated, mechanized chicken processing plants. Lagally wants to make enough plant-based chicken to replace much of the factory-farmed chicken (from about 9 billion birds) Americans eat every year, sparing as many animals as possible from suffering.

We can outcompete chicken. We have seen the very, very earliest signs of success ... I have a lot of hope.

“We can outcompete chicken,” says Lagally. “We have seen the very, very earliest signs of success in genuinely replacing it. I have a lot of hope.”

It’s all part of a vision shared by entrepreneurs, animal welfare advocates and sustainability researchers to transform how Americans eat. Currently, even with plant-based meat sales increasing at five times the pace of overall retail food sales and projected to grow nearly twentyfold in the next decade, such products account for only one fifth of 1% of the meat Americans consume. Experts have identified plant-based meats as an important way to build a bridge to a more humane and environmentally friendly food system. Unlike the products that preceded them, developed for vegetarians and vegans, the latest generation of plant-based meats, like the Impossible “pork” sausage Burger King is introducing this year, is designed for the masses. They’ve attracted the attention of billionaire investors and meat industry giants such as Tyson, Perdue, Cargill and Maple Leaf Foods, which along with Nestlé and Kellogg’s are launching their own plant-based products.

“That’s a sign of how sweeping the change is," says Josh Balk, vice president of the HSUS Farm Animal Protection campaign. “Even the meat industry sees this as the future.”

are eaten by Americans each year. Replacing some meals with plant-based options saves birds from suffering on factory farms.

in greenhouse gas emissions possible if the world switched to a plant-based diet.

Plant-based alternatives offer big advantages over animal-derived meat: They don’t require tightly confining animals on massive farms, as is now done to keep up with growing demand around the world, farms where chickens are bred to grow so fast, with such massive breasts, that their legs collapse beneath their weight and their hearts give out. Plant-based alternatives also free us from the air and water pollution and antibiotic resistance generated by factory farms. And they reduce global warming from two powerful greenhouse gases—methane produced by cattle and nitrous oxide released by the huge amounts of manure on factory farms—while allowing farmers to feed more people using less land. (It takes fewer acres to grow plant-based proteins than to grow crops that are fed to animals who then convert the plants into protein.)

William Ripple of Oregon State University, author of a research paper titled World Scientists’ Warning of a Climate Emergency, says it’s urgent people shift from animal-based diets to more plant-based ones. The article calls for “bold and drastic transformations.” That includes new ways of eating, says Ripple. “Plant-based meats such as the Impossible and Beyond Meat burgers as well as plant-based chicken may be able to play a huge role in reducing meat consumption and achieving a more sustainable future.”

That’s a sign of how sweeping the change is. Even the meat industry sees this as the future.

Tim Searchinger and Richard Waite, authors of a World Resources Institute report on how to feed a rising human population while preserving natural habitat, write in a CNN op-ed that plant-based proteins are essential if Americans are to cut the amount of meat they eat in half, as the report recommends. There will still be a place for cattle raised on existing grasslands or fed with agricultural waste such as brewer’s yeast, but not for cattle raised on land created by cutting down trees, Searchinger and Waite say. Plant-based meats can fill the gap. “By replacing much of the meat we eat in minced and processed form, these innovations can … make it possible to restore large parts of the world’s forests.”

Plant-based products offer convenience, which is driving people around the world to eat more meat, especially city dwellers and families where women work outside the home, according to a study by Anna Birgitte Milford of the Norwegian Institute of Bioeconomy Research. 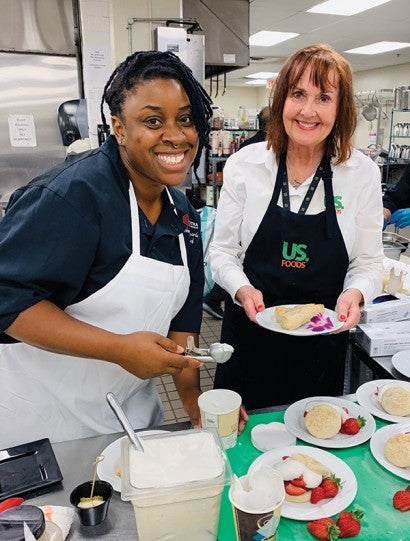 “For people used to eating hamburgers and chicken sandwiches, they are something that feels comforting,” says Morris. “They’re a good transition food, a really low barrier to entry.”

“You just have to open up your mind and go for it,” says Spectra executive chef John Schmitz. “You want to present food that is desired by everyone and happens to be vegetarian or vegan. People will choose it because it’s just plain good food.”

Like other nutritionists, Karla Dumas, a registered dietitian who directs the HSUS food and nutrition program, recommends that (processed) plant-based meats be eaten alongside plenty of plant-based whole foods. While eating plant-based meats has some health benefits over eating animal-based products, she says it’s important to consume a variety of fruits, vegetables, beans and whole grains.

“You want to present food that is desired by everyone and happens to be vegetarian or vegan.”

Veggie burgers are high in fiber and low in fat but might contain more salt than a meat hamburger. Plant-based nuggets have an easier time outdoing their animal-based counterparts healthwise because chicken nuggets are processed and often contain high levels of fat. Rebellyous, Morningstar Farms Chik’n Nuggets and other plant-based options offer more fiber and less fat.

Last year, even as KFC tested plant-based Beyond Fried Chicken in Atlanta, Americans continued to eat a lot of actual chicken. To reverse that, Lagally, a former Boeing engineer, was designing a highly efficient, high-volume plant-based production line to optimize quality, cut costs and meet growing demand for an alternative. “Unless we develop the technology, we’re never going to produce enough,” she says.

Most plant-based meats are made with equipment designed for other foods, such as slow, expensive extruders that push out dry snacks like cheese puffs using pressure and heat. Rebellyous is custom-building equipment—assembly lines that retain products’ moisture, blades that chop plant-based fibers without dulling. 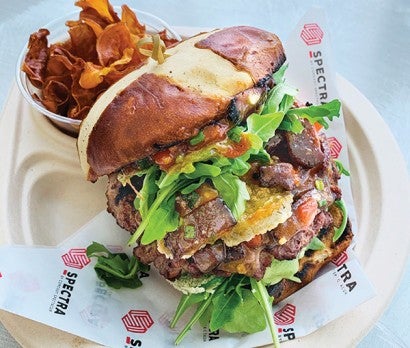 Rebellyous is also developing a soy-based nugget for schools (soy is a federally  approved source of protein; wheat is not). K-12 students are a vast market of 30 million but a tough one for Rebellyous to reach because of tight budgets—meal ingredients can usually cost $1.20 per meal—and USDA commodity subsidies that reduce the price of chicken nuggets by half.

Monty Staggs, president of Southwest Foodservice Excellence, has tried an early version of the Rebellyous soy nuggets and is interested. Formerly the vice president of a large beef company, Staggs is now focused on health, the environment and animal welfare. He says he’s looking for a low-priced plant-based product available at a volume that will meet the demand of his company’s 170 school system clients. Even more important, he’s looking for a product kids will choose in a lunch line.

“I want kids to vote with their palates,” Staggs says. “Many of them would eat this without ever knowing it’s not a chicken nugget.”

Driven by invention, investor dollars, urgent demands for sustainability and a deepening awareness of what eating more and more meat means for animals, companies like Impossible and Rebellyous are redefining what we put on our plates. Poised to remake the food system, they are reaching into every restaurant, every store, every cafeteria, every home.