Learn the facts about declawing and kinder, gentler solutions to the couch-versus-claws conflict
Ruthanne Johnson
Share

Vinyl nail caps and a scratch pad help keep the peace between Bodie Colvin and his people.
Meredith Lee
/
The HSUS

Back in veterinary school more than 20 years ago, Christianne Schelling first discovered what a declawing surgery entails. Like many people, she’d assumed it simply meant removing the cat’s nails in a way that ensured they wouldn’t grow back. She didn’t realize that because the tissue for each nail is connected to bone, declawing requires removing the last joint on each toe.

“That means 10 separate amputations for the cat’s front paws,” she says, “and 18 if it’s a four-paw declaw.”

As a vet student, she once saw a cat hurling himself against the sides of his cage because of the pain after his declawing. “I swore I would never do a declaw surgery,” Schelling remembers. A few years later, she launched declawing.com, a website that educates cat owners about an often misunderstood surgical procedure.

Most declaws are performed for owners who want to protect their carpet, furniture and other household items from their cat’s penchant for scratching. But once people understand what the surgery involves, Schelling says, they typically decide against such a radical solution. “They say, ‘Oh, I would never do that to my cat!’ ” 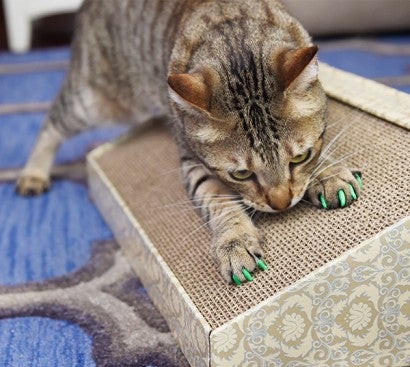 The solution to destructive scratching can be as simple as giving your cat the right things to scratch.
Meredith Lee
/
The HSUS

Declawing—except for the rare cases when it’s medically necessary, such as the removal of nail bed tumors—is already outlawed as a form of animal cruelty in dozens of countries, and Schelling believes the procedure is losing popularity in the U.S. A growing number of veterinarians don’t recommend declawing outside of medical reasons, she says. Some cities already prohibit the procedure, and at press time, New York lawmakers were considering legislation that would make it the first state in the nation to ban cat declawing.

In the wild, cats use their claws to catch prey, defend themselves and escape from predators. At home, that translates to attacking toys and climbing to favorite perches. Cats scratch to stretch their muscles and help hed their outer nail sheath. Because they have scent glands on their paws, scratching is also a way of putting their scent in their territory, which helps them feel at home and secure.

“Scratching is a vital part of cat behavior,” says veterinarian Susan Krebsbach with the Humane Society Veterinary Medical Association. “It’s a sign of a happy cat.”

Of course, this natural behavior can still be aggravating when it’s directed at your carpet, drapes or sofa. But living harmoniously with your cat’s claws isn’t difficult, says Krebsbach. “You just need to take a few preventative measures and redirect their scratching to areas where you find it appropriate.”

Scratch here, not there The solution to your cat’s destructive scratching can be as simple as providing him with alternative objects to scrape, shred and leave his scent on, says Katie Lisnik, director of cat protection and policy for The HSUS.

Offer a variety of scratching posts and pads from different materials like carpet, sisal, wood and cardboard. While some cats like vertical posts, others prefer horizontal or angled boards. Some like both, as each gives them a different stretch and feeling on their pads. “Once you find the one your cat likes better, they will get into a scratching routine,” says Lisnik.

You can buy scratching posts and boards, or you can make your own by wrapping a piece of wood with a carpet remnant or sisal, a hemp- like fiber. Schelling recommends sisal fabric over sisal rope, which “frays very easily and that can be a danger,” she says.

Steer clear of cheap vertical posts with a lightweight base. If a post is wobbly or topples over when your cats use it, “they’ll never want to scratch on it again,” says Lisnik.

Satisfy the itch Place scratching posts and boards in different locations, with at least one on every level of your house. Schelling also places corrugated cardboard pads under her bed, which prevents her kitties from scratching the underside of her mattress.

If your cat seems wary or indifferent to his new scratching zone, act like a cat and simulate scratching on it. Seeing you use the post could motivate him to give it a try. Another good strategy, says HSUS pet care issues manager Matt Wildman, is to drag a toy across the post so that your cat inciden-tally scratches it while playing.

Anytime you see your cat scratching the posts or boards you’ve set out, reinforce the good behavior with praise or a treat.

No scratch zone You can make furniture and other scratching hotspots less attractive with double-sided sticky tape or a scent deterrent such as a citrus spray formulated to repel cats. But in Wildman’s experience, the most effective strategy is to temporarily cover the object your cat has been scratching with a tight-fitting sheet and then place a scratching post next to it. Rub catnip on the post to excite his attention, or use honeysuckle spray for felines uninterested in catnip. “Then they have the deterrent and something interesting nearby to take its place,” says Lisnik.

To deter territorial scratching, Wildman recommends gently rubbing a soft fabric first on your cat’s cheeks and then on the object. This saves your cat the trouble of using his claws to transfer his scent to the object.

Blunt instruments Trimming your feline’s claws every week will limit the damage she can inflict on your furnishings. “It’s a super simple thing to do that can make a huge difference,” Schelling says. Use cat clippers rather than human nail clippers to prevent the nails from fraying and keep them blunter for longer.

To protect her elderly mother’s frail skin from inadvertent scratches, Schelling applied vinyl nail caps to her mom’s cat. “They work by blunting the nail so the cat can still scratch without doing damage,” she says. Nail caps last four to six weeks and can be purchased at pet stores and online.

“But I still recommend that pet owners provide some sort of rough scratching surface for the cat because they love that feel,” says Schelling, “and they will still scratch.”