With help from HSI, Korean dog meat farmers get out of the business
Karen E. Lange
Share

Lee Tae Hyung had raised dogs for meat for more than two decades, but late last year he was looking for a way out.

Under criticism from his family for a business that shamed them, and facing complaints from neighbors about the noise and smell, he was ready to cut ties with the trade that had supplied half his income ever since he left the Daewoo motor company and moved to a small town east of Seoul to live with his parents.

So when Humane Society International offered him an opportunity to switch from raising dogs for meat to raising crops, Lee agreed. A grant helped him replace barns full of rusty cages with greenhouses, and Lee will now serve as a local spokesperson for an HSI program seeking to persuade other members of the Korean dog meat farmers association to convert their businesses. It’s a good time to leave the trade: Demand for dog eat—traditionally believed to possess medicinal properties—is more and more confined to South Korea’s older population.

“I think a lot of people want to get out of the dog meat trade,” Lee says. “Because people don’t like dog meat like in the past.” 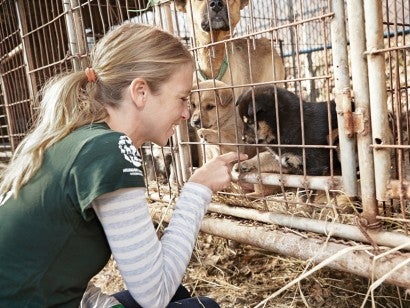 The owner of these dogs agreed to surrender them, leaving the dog meat business to expand his blueberry crops.
Manchul Kim
/
AP Images for HSI

Before the deal, Lee sent his dogs to meat markets and restaurants, where they were electrocuted or bludgeoned to death. Under the agreement, Lee’s 57 dogs became the property of HSI. In February, the dogs were photographed, named, vaccinated and treated for any medical problems. In March, they were flown to San Francisco and placed along the West Coast for adoption, the second such transport to the U.S. (The first, in January, made a fluffy white Jindo mix named Snowball a media star.)

HSI and the Change for Animals Foundation are using these dog rescues to persuade Koreans, increasingly enamored with keeping dogs as pets, that the animals traditionally raised for meat in their country—specifically the “dosa mix” and “yellow dogs” (Nureongi)—deserve the same love and care that their pet dogs receive, says Kelly O’Meara, HSI director of companion animals and engagement. “These dogs are desirable to us,” O’Meara says. “It’s surprising to the Koreans, because there is still a distinction between ‘meat dogs’ and ‘pet dogs.’ ”

In order to convert a large number of the 1,500-plus dog meat farms still in South Korea, HSI needs to involve the country’s government, which ideally would compensate the farmers for some of their costs, O’Meara says. A big motivation to provide such subsidies is the 2018 Winter Olympics, she notes, as the Games will be held in Pyeongchang, bringing heightened international attention to South Korea.

Conditions at Lee’s farm were miserable, says Lola Webber, a Change for Animals founder and an HSI consultant who has visited several times. Knee-high piles of feces lay beneath the wire cages. Dog carcasses and whole, feathered chickens had been left for animals to eat. When Webber approached adult dogs in their cages, they responded with extreme fear.

“I’ve never seen dogs behave this way in my life,” she says. “They were beyond terrified. They were fighting for their lives.” Some dogs bit. Others screamed. One curled up in a ball and lay shaking, as small as she could be.

With the conversions, the dogs will change, as will the farmers, Webber says. She watched as the first farmer to switch was transformed after pledging to end his involvement in the dog meat industry and expand his blueberry business. He went from handling his animals roughly, like commodities, to holding them gently and stroking them to soothe their fear. “I feel good in my heart,” he told her. “I’m glad they’re going to a new home.”

Many Koreans outside the trade are ashamed to talk publicly about it, but a veterinarian confided his feelings to Webber. In his father’s generation and his own, he explained, people ate dog meat because they were poor and it was relatively cheap. But the country is wealthy now, he told her, noting: “It’s my hope that my son will grow up in a Korea where no one eats dogs."