We are alive at a pivotal moment: For ourselves, for the Earth and for every animal on the planet. If we all are to survive, we must change the way we eat. Which sounds dire. But it is within our grasp. Think of it as a chance for a better world. A great and shared adventure. A journey to a place where we have long wanted to go, but until now lacked the means to reach. For many people, in many places, the shift is already underway: the move to a more plant-based diet. It is compassionate, it is hopeful, and, yes, it can be quite delicious.

The change begins with all of us. This summer. This week. Today. When you go to the grocery store, or open the refrigerator, or peruse a restaurant menu. The more you choose plants over animal products, the more animals you’ll spare from suffering, the healthier and better fed you’ll be and the more you’ll make possible a livable future.

We did not always know this, but now we do: The current system of intensive animal agriculture is unsustainable. And the switch to eating more plant-based foods must happen quickly. An article in Nature says that without big changes to current trends, the amount of food people require will reach levels “beyond the planetary boundaries that define a safe operating space for humanity.” An editorial in the medical journal The Lancet says we are approaching a day of reckoning. “What is a healthy amount of red or processed meat?” asks the writer. “It’s looking increasingly like the answer, for both the planet and the individual, is very little.”

Fortunately, there are plenty of other foods to eat, equally delectable. We have the teeth and guts of a species evolved to eat almost anything. For the majority of our history, most of us survived on little—if any—meat or milk or cheese or eggs. And we can do it again.

Josh Balk, vice president of Farm Animal Protection at the Humane Society of the United States, envisions people taking steps—some small, some large—toward eating plant-based. “It can be Meatless Monday, it can be vegan before 6 p.m. or other plans to reduce meat consumption,” he says. Think of it as, “ ‘I can make a difference. I can make a choice to support a system that is abusive and destructive or instead one that moves us toward a kinder, more merciful world.’ ”

It’s only since World War II—in the memory of generations still alive—that meat, egg and dairy consumption soared in the United States and other wealthy countries, giving rise to factory farms and the cage confinement of animals. Today, Americans eat more meat than anyone in the world—100 pounds per person every year, or three times the global average. If Americans ate plant-based diets, U.S. agriculture could feed about 350 million more people, says a paper in the Proceedings of the National Academy of Sciences. That’s because growing crops to feed to animals that people then eat is less efficient than growing crops that people directly consume. As animals eat, breathe, digest, move around and defecate, they use up—and lose—energy from food. In the case of beef, 96% of the protein fed to cattle is lost.

Environmental studies warn that large-scale meat and dairy production is pushing species to extinction as forests and grasslands where wildlife live are converted into acreage for growing fodder and grazing animals. “Livestock production is the single largest driver of habitat loss,” states one paper by researchers at Florida International and Oregon State universities. 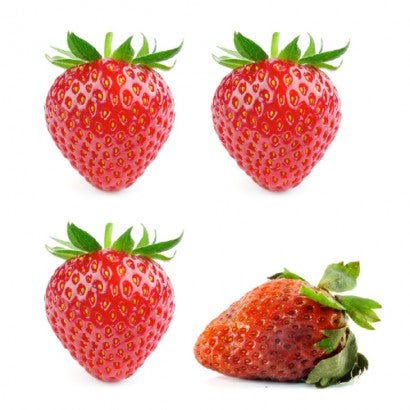 Health studies warn that animal-based diets put the world at risk for infection by antibiotic-resistant bacteria from factory farms, where big doses of the very same medications prescribed to humans are used to promote growth and manage disease in crowded, dirty conditions. Medical research links consuming animal-based diets with the modern epidemics of heart disease, high blood pressure, stroke, Type 2 diabetes and cancer. Even chicken meat, often considered a healthier alternative to red meat, contains cholesterol and saturated fat, though in lower amounts, as well as sodium (from being soaked in a salt solution in slaughterhouses).

The links between animal-based diets and chronic illness are so strong that physicians are using plant-based diets to treat these conditions. Dr. Shivam Joshi didn’t learn this in medical school at the University of Miami. But shortly after his 2012 graduation, he encountered the book The China Study, which followed people eating different diets in different parts of China for 20 years. After reviewing similar research showing the harm animal products can cause to people’s health, Joshi changed the way he practiced medicine.

“I do a deep dive with patients about their lifestyle, about their exercise and what they eat,” says Joshi, who uses plant-based diets to treat people with diabetes, obesity and kidney disease at New York University’s Langone Medical Center. “You can really change the trajectory of someone’s health. Some people, there’s a miraculous transformation—their diabetes is gone, or their blood pressure is normal.” 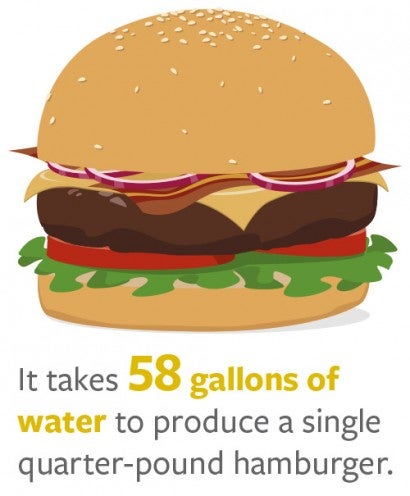 How much water does it take to make a hambuger?

Beef has the biggest environmental impact of any food. Eating a plant-based burger rather than a quarter-pound beef burger uses 99% less water and more than 90% less land. It also generates more than 90% fewer greenhouse gas emissions.

Beyond the threats to wildlife and health looms global warming, the largest danger from continuing animal-based diets. Climate change studies identify industrialized animal agriculture and the related destruction of forests as some of the biggest contributors of greenhouse gases, such as methane and carbon dioxide, and the greatest opportunity to quickly reduce emissions. “Moving from current diets to a diet that excludes animal products has transformative potential,” reads a paper by Joseph Poore of Oxford University and Thomas Nemecek of the Swiss research center Agroscope. A worldwide shift to plant-based diets could reduce greenhouse gas emissions by as much as 28% while also curbing the carbon absorption that makes oceans more acidic and the nutrient runoff that pollutes lakes and bays, they say.

In the U.S., the biggest food-related reductions in greenhouse gas emissions could come initially from decreasing intensive production of beef and milk, according to Helen Harwatt, animal law and policy fellow at Harvard Law School. Some land where crops are grown for farm animals could be planted with crops for humans, such as beans, and land where cattle and cows now graze could be returned to its natural vegetation, such as forest, allowing for carbon to be removed from the atmosphere and put back into the vegetation and soil.

“It’s not about depriving anyone,” she says. “We’re reimagining food.”

How do you go from an animal-based to a more plant-based diet? Reduce meat, fish, eggs and dairy products. Base your diet instead on fruits and vegetables, including greens, grains, legumes, nuts and seeds.

Vegans and vegetarians remain a small portion of the U.S. population. But a third of people responding to a recent U.S. poll said they ate at least one meatless meal a week, and one-quarter of Americans between the ages of 25 and 34 are vegan or vegetarian. Demand for plant-based proteins rose 20% between 2017 and 2018. Veggie burgers—including new ones that simulate the texture and look of beef—are now commonly featured on the menus of national chain restaurants: Carl’s Jr., Hardee’s, White Castle, TGI Fridays and A&W. This spring, Burger King announced plans to introduce a meatless Whopper nationwide.

Just four years ago, when Karla Dumas—a registered dietitian who directs the HSUS’s food and nutrition division—started training food service staff at universities, K-12 schools, hospitals and military dining operations to prepare cheaper, healthier plant-based meals, she had to work to persuade them to sign up. Today, as managers respond to what their customers want and what they see on the news, she gets unsolicited requests and is scheduling trainings many months in advance.

Switching to a more plant-based diet can be simple and inexpensive, says Sherene Chou, a registered dietitian and nutrition consultant who trains medical students in how to make this way of eating affordable. As you change your diet, relax and have fun, advises Chou.

“It doesn’t have to be all or nothing,” she says. “It’s less about judgment and more about being open-minded.”

After reading her first issue of All Animals magazine in January, HSUS member Holly Hain decided to try Meatless Mondays with her husband, 12- and 10-year-old sons and 6-year-old daughter. They now eat meatless about half the time. Even though her husband is “a meat and potatoes guy” who hates beans. Even though they live just outside Chicago, and she worried whether she could make hearty meatless meals in winter. 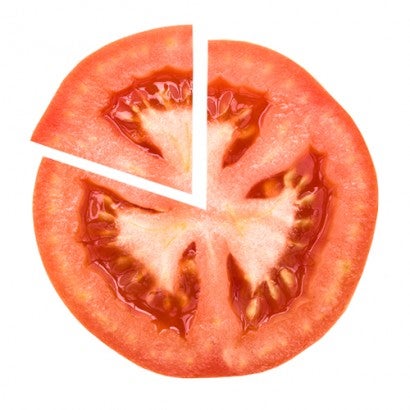 “We’ve discovered we really like zucchini and squashes—we’ve made them into soups and stews,” she says. “With these vegetables, it actually tastes ‘beefier.’ It’s thicker, it’s denser, it’s more filling.”

Hain buys vegetables the family rarely ate before—eggplant, asparagus, artichokes, edamame, fingerling potatoes, different types of broccoli, different colors of cauliflower. She makes her own vegetable broth from scraps, kale and chard. And she has found that she likes margherita pizzas better than sausage or pepperoni.

“It’s been an adventure,” she says. “Just one small change starts the ball rolling.”

Often people shift more quickly. When he found out he had Type 2 diabetes in 2016, Brooklyn Borough President Eric Adams completely overhauled his diet. Adams was already suffering vision loss and tingling in his hands and feet, and doctors said he would have to be on medication for the rest of his life. Not wanting that, he searched on the internet for an alternative and found that plant-based diets were being used to reverse diabetes. Adams decided to try it.

“After two weeks of not having meat on my plate, I said to myself, ‘Wow, you’re still here! I know I can do this.’ ”

“I felt so clear,” says Adams. “I thought better. I moved better. I did not look at what I can’t eat. I looked at what I can eat. It was amazing how my taste buds opened up.”

This new way of eating is open to all of us. We can enjoy the abundance and color and amazingly varied tastes of plant-based meals. We can explore other cuisines. We can invent new ones. Fewer animals will suffer, fewer animals will die. More of us will live healthy into old age. The water and air and oceans will be cleaner. Land will return to forest and wildlife. And we will have literally helped save the planet.

It’s all still possible. If we choose.

Having these foods on hand—in addition to staple pantry items—will make animal-friendly cooking even easier.