Targeted for slaughter: Contests award prizes to those who kill the most red foxes and other animals.
RT-Image
/
iStock.com

The pictures posted on social media did it: dozens or even hundreds of dead coyotes and foxes filling the backs of trucks, or laid out in rows on bloodied ground or hung by their hind legs in a celebratory display above piles of other dead animals. Grinning competitors holding semi-automatic rifles and hoisting the small animals they had shot with telescopic sights. Kids wearing Christmas hats and camo smiling shyly as they posed behind coyotes killed during a contest in Arizona  called “Santa Slay.” 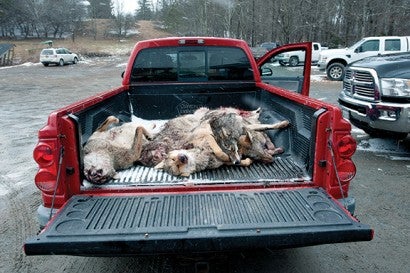 Coyotes killed for a New York contest in early 2020.
The HSUS

The photos, shared by contest participants, provoked outrage over wildlife killing contests, in which participants compete for cash and prizes by trying to kill the most (or big, or smallest) coyotes, foxes, bobcats, prairie dogs, raccoons, squirrels, mountain lions, wolves and other creatures. Much of the disgust came from animal welfare advocates and the general public, who generally don’t hunt (only 4% of Americans do). But some also came from mainstream hunters worried about the image of their sport, which is declining in popularity, and from state wildlife commissions that are increasingly realizing that if they want to remain relevant, they must adapt to a changing society that prefers to view wildlife through binoculars rather than a rifle scope.

Encouraged by the Humane Society of the United States and other members of the National Coalition to End Wildlife Killing Contests—as well as more than a dozen towns, cities and counties that have passed nonbinding resolutions and proclamations—seven states now outlaw such contests, the latest Colorado and Washington in 2020. Two contest bans—Vermont’s in 2018 and New Mexico’s in 2019—were enacted by state legislatures. The other five came from state wildlife commissions—California’s in 2014, Arizona’s and Massachusetts’ in 2019, Colorado’s in May and Washington’s in September.

Jill Fritz, HSUS senior director of wildlife protection, says to her surprise, hunters on wildlife commissions are often the ones leading the effort to ban these contests. “I was expecting years of fights in legislatures on this issue—a real battle. What I wasn’t expecting was the response from the commissioners themselves.”

Brad Smith, a hunter who serves on the Washington Fish and Wildlife Commission, says he doesn’t consider the events a legitimate part of his sport. “These are not hunting contests, they’re killing contests.” 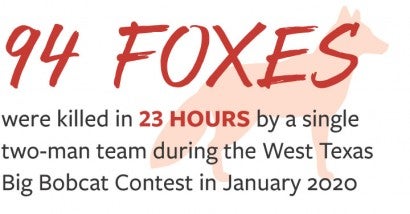 Because of the seven state bans, more than 140 annual contests won’t happen again. That includes Santa Slay, which took place each December for a decade. The HSUS is working to enact bans in every state in order to end another 1,000 events. In 2020, the HSUS released undercover videos of two killing contests in Maryland that targeted coyotes, foxes and raccoons and of a coyote killing contest in New York that allowed participants to shoot animals over bait such as pastries and other food and the use of steel-jawed leghold traps. In 2021, the HSUS will support efforts to ban contests in Maryland, New York, New Hampshire, New Jersey and Oregon (as well as a ban of contests on federal lands).