Chimpanzees enjoy a delivery of fresh veggies at the Second Chance Chimpanzee Refuge Liberia.
Carol Guzy
/
For the HSUS 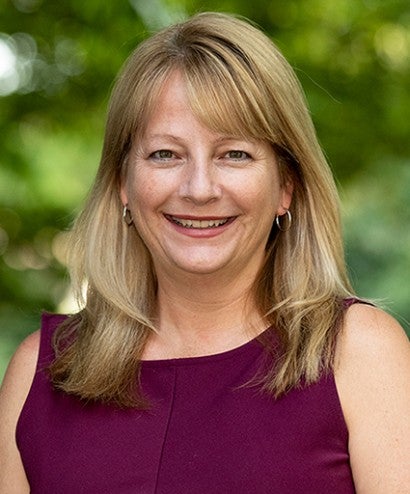 Years ago, Kathleen Conlee worked in a laboratory that bred and conducted research on monkeys. Although she was (and continues to be) haunted by the practices she saw, she stayed in her position out of a duty to try to protect the animals—until a drive to do more led her to a career in advocacy. Conlee is now vice president of animal research issues at the Humane Society of the United States. She also works as the director of Second Chance Chimpanzee Refuge Liberia, an HSUS/Humane Society International-operated sanctuary for chimpanzees previously used for research. In this edited interview with editor/writer Brianna Grant, Conlee details her career path, the projects she is working on and how everyone can help protect animals used for research and testing.

You started your career working in a breeding facility and laboratory with monkeys. How would you describe that experience?

When I went into it, I felt that it was necessary, it was unfortunate, but I want somebody there who cares about the animals, somebody to advocate for them. Ultimately, it really opened my eyes to the treatment of the animals and how research is done. I thought, “I think we could be doing better than this. Is this really how it works?” I ended up staying for quite a number of years because I was worried about what would happen to the animals if I left. They didn’t have a lot of people looking out for their best interest.

Was there a specific moment working in a laboratory that changed your viewpoint?

There were many moments I remember thinking, “Oh my gosh, this is terrible for the animals.” But it built up over time. My job was to run the behavior and breeding of monkeys. We wanted “happy” monkeys who would breed and then the offspring would be shipped out to other laboratories for research. It got to be that they would ask me to pick specific monkeys to be sent off to a laboratory, literally filling orders with animals, and it just became harder and harder over time. And I kept making up more excuses for why monkeys couldn’t go. 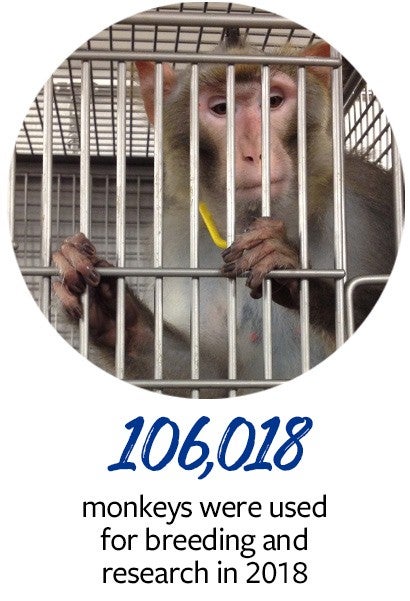 The breaking point was when the company was engaging in illegal activity: They were illegally importing animals captured from the wild and putting on paperwork that they were captive-bred animals coming into the country. A lot of animals died in transport. They weren’t supposed to be shipping babies, and I started questioning why these little babies were being shipped all this way. And it ends up that it wasn’t actually legal.

Eventually I decided I was done and thought I needed to do something bigger anyway. I had been staying there because I was worried about these individual animals, but this is happening on a wider scale. I thought, “Can I do something bigger to fix this instead of just at this one place?” I mean they had 7,500 to 8,000 monkeys there but there’s a much wider universe.

How did your advocacy work begin after you left the laboratory?

I had always done a lot of hands-on work and an opportunity came up to work at a sanctuary for chimpanzees and orangutans. I worked there for about a year and a half, so I got to understand sanctuaries and how they work. The sanctuary was being built from the ground up and I was the first employee at that organization. I loved the experience; it was totally different from being responsible for and trying to protect thousands of monkeys to just a handful of great apes. We had great volunteers; everyone was very dedicated but I kind of felt like the animals didn’t need me there—there were many people looking out for them and they had great lives. I needed to do something bigger. Someone I knew happened to know someone at the Humane Society of the United States, and I applied for a couple jobs and ended up getting hired.

What was your first position at the HSUS?

Information specialist for the animal research issues department. I did web content and background research and worked my way up the organization.

During my early days at HSUS, I had to go to the National Library of Medicine to pull some scientific journal articles, and I remember reading about a painful dental experiment. And when I looked at the methods section, it said that the monkeys were from the lab where I used to work and during the timeframe I was there. It was extremely painful to think I sent monkeys off to that study. 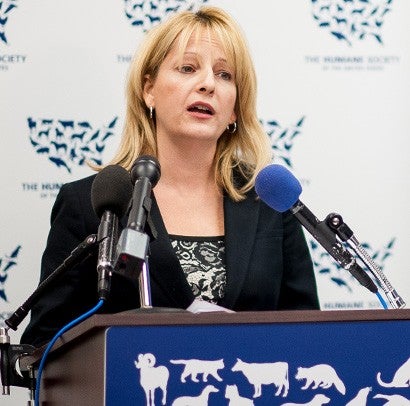 Kathleen Conlee speaks at a press conference in Washington, D.C., where the HSUS released the results of an undercover investigation of laboratory experiments on dogs and other animals.
Pete Marovich
/
For The HSUS

You are now the vice president of animal research issues. Is there a project or campaign you are most proud of?

We actually achieved ending chimpanzee research in the U.S., which everyone said wouldn’t be possible in our lifetime. I think it was a perfect example of all of the tools that we use coming together, which shows how we can get things done. Corporate work, legislative work, regulatory work, public outreach, undercover investigations—it was everything! Seeing some of those 55-year-old chimpanzees going outdoors for the first time when they got to sanctuary, literally the chimps we saw in the undercover investigations, you don’t see that very often. Seeing that progression was very powerful.

And with 32 dogs who were used in pesticide testing getting released in 2019, that’s another perfect example of how our organization works best."

(Read about our undercover investigation exposing research testing on beagles and how we helped secure a happy ending for the dogs.)

You are currently involved with the lifetime care of 65 chimpanzees living at Second Chance Chimpanzee Refuge in Liberia. The HSUS first became involved in this project when former research chimps needed lifelong care after they were phased out of invasive experiments and funding for their care was withdrawn. Can you tell us about your work with that project?

That was an unexpected project that will last far beyond my lifetime. [laughs] We were alerted to these chimpanzees in Liberia and the alarm was sounded at the HSUS. A bunch of people came together and discussed how we were going to feed these chimps who were going to starve. No other groups were stepping up or able to step in like we could, so we made the decision to care for the chimps. We negotiated with the organization that had previously cared for the chimps, and we ended up getting about half the funding needed to pay for their lifetime care. I’m really proud of the HSUS for stepping in. There are many emergency situations across the world, but we really did make a commitment to those chimps. And six years later, here we are. Can’t believe it’s been that long.

Learn More About the Refuge

What animal research issues are you working on now?

Our priority is ending cosmetics testing on animals in the U.S. and the import of cosmetics tested on animals. All roads lead back to passing federal legislation, the Humane Cosmetics Act. We have industry supporting us, the public supporting us and we just need to get this over the finish line. It will send an important message to the rest of the world, such as other countries that are further behind on this issue, to move forward and move away from this practice. Our goal is to end all harmful animal testing and research, which is a longer-term goal.

We are also focusing on the issue of dog testing because there is a lot of opportunity there: The public is very engaged and scientists are being asked to look more closely at it because of public concern. Of course, we’re not saying, “Don’t use dogs but do use a different animal,” we’re saying, “Don’t use dogs but do invest in non-animal technologies.” These technologies are more effective, efficient and often cost less. We also couple that with getting more government funding for replacing animals altogether.

Urge your federal legislators to support the Humane Cosmetics Act.

How can advocates help in the fight to protect research animals?

There are a lot of opportunities. Mainly at the federal level, so reaching out to policymakers when bills like the Humane Cosmetics Act are up for consideration. We also have efforts to get dogs and cats—until we stop their use in research altogether—adopted out after their use in research.  It’s ever-changing how people can weigh in, and I would urge people to keep up with the HSUS End Animal Testing Campaign Facebook page to know the latest.

Other ways to get involved: