EXCLUSIVE: Dying without a sound

Editor's note: A day after the Humane Society of the United States released the results of its undercover investigation and two days after police searched the premises, Petland announced that it was cutting ties with the franchise store in Fairfax, Virginia, and removed its company name from the building. Acting on a tip from the HSUS, Fairfax police searched the store with a warrant on April 1 and found 31 dead rabbits and one dead dog in the freezer. They are investigating.

Near the front of the Petland store in Fairfax, Virginia, are the live rabbits used to draw in families with children—many of them coming from a birthday party venue in the same shopping center. While Petland’s puppies, which can sell for thousands of dollars each, are kept behind glass, the $85 bunnies are out in the open in the noisy store—anyone can pick them up, and plenty of kids and adults do. Children often drop them as the rabbits instinctively push off with their hind legs or bite or scratch to escape. Visitors to the store probably don’t even realize when rabbits have been hurt by their handling—being prey animals whose survival is tied to the ability to hide, they make no sound.

In the back of the store, as revealed by an undercover investigator for the Humane Society of the United States, are dead bunnies, out of sight, removed from the display. The investigator witnessed one rabbit who had been put aside in a basket under a shelf, to spend his last hours without veterinary care or relief from pain. If they were dogs, they might cry out. But the rabbits perish silently, a short distance from where children play with other rabbits. When they die—at the rate of one every other day during the time the investigator was able to track the deaths—employees stack their bodies in the freezer. When enough dead rabbits accumulate in the freezer, they are carried out of the store in a trash bag.

"There's like nothing we can do because they don't get treated by a vet. When they're sick, they're sick. We just let them die." 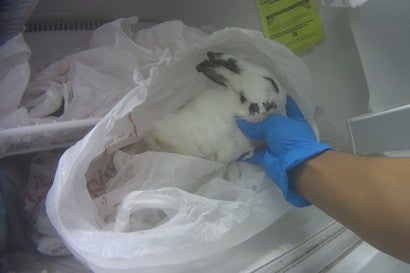 An HSUS undercover investigator finds a dead rabbit in the freezer at Petland in Fairfax.
The HSUS

Our investigator, whose name is being withheld to protect her undercover work, counted at least 14 dead rabbits in the month she had access to the freezer, animals who apparently died without ever receiving veterinary treatment. She also documented unsuspecting customers purchase bunnies unaware of their potential health issues. One customer returned to Petland two hours after purchasing a rabbit. The bunny, whom the customer named Moon, had gone into seizures and died. The store gave the customer a new rabbit, and Moon was put with the others in the freezer.

"It was shocking," says the investigator. "The toughest part was that no one seemed concerned. Everyone just seemed to accept the fact that the rabbits die.'"

Video shot during the investigation captures an employee explaining: "There's like nothing we can do because they don't get treated by a vet. When they're sick, they're sick. We just let them die."

A member of the HSUS investigations department (whose name is also being withheld) says that the rabbits are collateral damage for the store. "The rabbits are treated like throwaway animals. They exist as something for people to touch and hold."

"The rabbits are treated like throwaway animals. They exist as something for people to touch and hold."

The HSUS investigator was unable to determine the reason the rabbits Petland sells are dying. It could be they are dying from injuries suffered during handling by the public. And they may be arriving at the store already sick and in danger of dying. As with the puppies it sells, which Petland stores often buy from puppy mills, the majority of the rabbits come from a large-scale commercial breeding operation that confines animals in small, dirty cages and fails to give them adequate care. Because of the number of rabbits it says it sells, the farm in rural Maryland that supplies the rabbits to Petland Fairfax should be licensed by the USDA under federal law, but it appears it is not (which means it is not inspected). The HSUS investigations team member visited the operation in March and found rabbits crowded into rows of outdoor hutches open to the elements or into filthy wire-floored cages in a barn. Some rabbits appeared to be sick or injured. The investigator found a dead rabbit placed on top of a hutch.

At the breeding operation that supplies rabbits to the Petland in Fairfax, an HSUS undercover investigator found rabbits in small outdoor hutches exposed to the elements.
The HSUS
The breeder, who appears to be unlicensed, also kept rabbits in crowded, filthy cages inside a barn.
The HSUS

Though they are often bought on impulse by people with little awareness of the commitment involved, rabbits, the most popular small pet in America, are not short-lived animals. Properly cared for, spayed or neutered pet rabbits can live eight to 12 years, according to the House Rabbit Society, a nonprofit rabbit rescue group. In contrast to the Fairfax Petland store, of the 180 rabbits surrendered in one year to the nearby Fairfax County Animal Shelter, just two died, says John Goodwin, senior director of the HSUS Stop Puppy Mills Campaign. 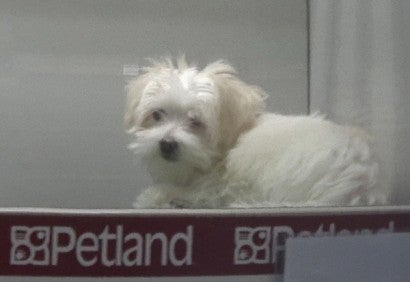 "A retail store is not the place for baby animals with immature immune systems, living in display cases without their mother or litter mates," Goodwin says.

Rabbits aren't the only animals suffering in Petland locations. A 2018 HSUS investigation at two of Petland's 81 locations discovered sick puppies, overcrowded cages and a dead puppy in a freezer. After the release of the investigation, more than 130 customers contacted the HSUS with accounts of Petland puppies who became ill or died shortly after purchase.

The HSUS is working to shut down the retail pipeline that keeps puppy mills (and rabbit mills) in business and leads people to purchase animals with major health problems, many of whom die. So far nearly 300 communities and the states of California and Maryland have passed ordinances that ban sales of puppies in retail stores. Some, like California's law and pending legislation in Pennsylvania, cover rabbits. At the same time, an organization run by Petland's chief lobbyist is working to pass laws that would strip municipalities of the power to regulate pet sales. Arizona and Ohio approved such measures in 2016, and this year similar proposals are advancing in about 10 states.

Petland is the only one of the top 25 pet sales and supply companies that still sells commercially raised puppies, says Goodwin. Less than 2% of the industry's $70 billion annual revenues come from such sales.