About a year ago, our 15-year-old pup began falling down when he tried to walk. Each time Maverick took a few steps, he stumbled to the left and his back legs buckled, sending him to the ground.

This is the same 20-pound bundle of energy who once had such leaping ability that he grabbed our Easter dinner off a 4-foot-high counter. The same little black fuzz of curls who would pogo-stick his way along our picket fence whenever he saw a dog or human across the street he wanted to greet.

Even though he was a few months shy of his 16th birthday and arthritis had already robbed him of his ability to jump reliably on our couch, falling down as he walked was concerning.

We ended up at the office of a neurology veterinarian who told us what no pet owner wants to hear: It was almost certainly a brain tumor. The only way to know for sure would be a costly MRI, but given his age and his symptoms, it was highly likely.

My husband and I went home, I cried and we decided to let Maverick have the best life possible for as long as possible, making sure he was as comfortable and as happy as he could be. But how would I know when it was time to say goodbye?

Maverick was the first dog I ever had, after a childhood spent yearning for a furry best friend prohibited by my mom’s allergies. I’d never had to determine when a dog had reached the end of his life—and I’d also never loved a small bundle of fur so fiercely.

Mav came into my life the year I turned 30, and it wasn’t long before he began to define my identity. As my friends were getting married and having babies (while I barely even dated), Maverick was my constant sidekick. We went on hourslong hikes together. I began signing birthday cards to my niece and nephews with “Love, Jodie and Maverick.” He occasionally came when I asked him to, he was a perfect fit when he curled up in the crook behind my knees to snuggle on the couch and his separation anxiety-induced high-pitched bark infuriated my neighbors. A friend called him my canine soulmate.

We were a package deal. Everywhere I went, I asked if Maverick could come. The truth is, I felt separation anxiety, too.

And now we were facing the final goodbye.

When you have a pet, you don’t want to think about the fact that you will outlive them. You will likely have to provide extra care as they age, and someday, you will say goodbye. 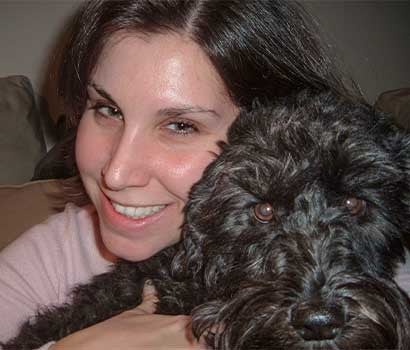 When you have a pet, you don’t want to think about the fact that you will outlive them. You likely will have to provide extra care as they age, and someday, you will say goodbye.

The best way to know how to do all that is to prepare, experts say.

“Their lives are so short relative to ours—we see them go from essentially little kids to our grandparents in that brief span,” says Dr. Barbara Hodges, director of advocacy and outreach for the Humane Society Veterinary Medical Association.

You can make accommodations to help senior pets have a more comfortable life as they age, Hodges says. Recognize that your furry friend cannot do the same things he once did. Long walks might need to become short ones; she might need a litter box with lower sides for easy access. Provide a ramp so she can easily climb on furniture; raise food and water bowls to make them more accessible.

There are many ways of alleviating pain in an older pet, Hodges says. You can work with your veterinarian (or other specialists) to try either pharmaceuticals or other treatment, such as acupuncture, chiropractic care or physical therapy. You might also reach out to someone in the veterinary hospice field, which has grown exponentially in recent years.

Dr. Tyler Carmack, president of the International Association for Animal Hospice and Palliative Care, started her Virginia practice in 2011, two years after the association was founded. Since then, attendance at annual conferences has increased 20-fold.

“Veterinarians have done the palliative care portion for a long time,” Carmack said. “Animal comfort has always been a priority. But for me, when I switched from emergency veterinarian medicine to hospice, really, the focus broadens. Instead of just focusing on the patient and what is the best treatment, it involves talking with the entire family—getting to the emotional and psychosocial and all of those factors that go into decision-making toward the end of life and coaching them through that.”

There are numerous quality-of-life scales that can help pet owners identify the right time to say goodbye. But Hodges and Carmack stress one fact: You know your pet best. You know best when they aren’t acting like themselves or seem to be in pain.

And when you see those key signs, you can help make the transition a peaceful one with some thought and care.

“My biggest piece of advice is to not wait,” Carmack says. “We hesitate to call a hospice or palliative care provider because that sort of means we’re getting close to the end. And I think the sooner we’re able to reach out and incorporate the palliative care and start thinking about how we’re going to be making decisions, the easier it is to have a plan that families feel comfortable with.”

How is your pet interacting with you and your family? Is your pet able to have restful sleep? How are you coping with the changes in your pet?

I’m a journalist, which means I approach every decision and obstacle armed with facts and information. Mav’s veterinarian sent me home with a list of seven local at-home euthanasia vets. The closest hospice vet to us in Charlotte, North Carolina, was Dr. Barbara Butchko of Meridian Mobile Veterinary Care. She would become our counselor and confidant over three months of emails and phone calls as Maverick’s condition declined.

In her initial at-home evaluation, she saw Mav’s unsteadiness and heard how we hand-fed him—sometimes one piece of kibble at a time—because he could no longer stand at his food bowl. We told her how he woke each night around 1 a.m. needing to drink water and go outside, requiring our help to find his water bowl and be carried to our backyard.

She left us with a questionnaire to assess not only Maverick’s quality of life, but ours: How is he interacting with you and your family? Is he able to have restful sleep? How are you coping with the changes?

The most valuable exercise asked us to identify three things that Maverick still enjoyed and then track whether he was able to enjoy each of those activities every day. For Mav, it was eating (our schnoodle never turned down a morsel of food), spending time with me (he perked up each day when I returned home from the office) and going on car rides (he immediately relaxed and went to sleep every time he was buckled into the back seat).

You know your pet best. Tracking your companion’s daily activities can help signal when his or her quality of life is changing. You can download a digital app for your smartphone or use a homemade chart.
Mikimad
/
iStock.com

Our definition of “good” tends to change over time as our pet’s condition worsens, Butchko explained, and it helps to have steady markers to judge quality of life. I installed an app on my phone that gave each day a color-coded assessment: green for good, yellow for neutral, orange and red for bad.

Butchko said we were doing everything we could—we had lined every inch of our wood floors with throw rugs, we’d elevated his water bowl on a plastic crate so he didn’t have to bend down, we used a harness to guide him as he walked outside. Even so, he started taking a daily dose of steroids to alleviate any swelling in his brain. It helped him walk a bit straighter at first, but not for long.

Soon, we were back to steadying him to keep him upright. And the colors on my phone app began to move from some greens to mostly yellows, then more frequent oranges and reds.

Still, I thought we were managing. He adjusted. He celebrated another birthday. But was he happy? He still found enjoyment in his three favorite things—food, me and car rides—and there were flashes of his smiling face during those times.

But then we made a heartbreaking discovery: What we thought was Maverick attempting to scratch his face on furniture because of allergies was not itchiness. It was pain. He was pressing his head against the couch because it hurt.

Maverick was suffering, and I knew it was time to call Butchko. I could carry him everywhere, I could watch as he lost all muscle tone, I could feed him one piece of kibble at a time, but I couldn’t bear to know that he was hurting.

I thought of the final months of my mom’s life as she battled cancer two years earlier, when she made a comment that wrecked me: “I’m not living. I’m just existing.” I feared Maverick was at that point. His life had become so difficult, no matter how we helped him, and I didn’t want him to suffer any longer.

Butchko came to our house a week later. After a few minutes of observation, she assured us that we were making “the kind decision.” We sat in our backyard as I held Maverick, telling him how much I loved him, how much joy he had brought to our lives and how we just didn’t want him to be in pain anymore. My heart broke as she gave him a sedative to ease his transition.

In my lap, Maverick yawned three times. He was ready to go to sleep. I knew it was time, but I still wasn’t ready to say goodbye.

I doubt any of us ever are.

Adapt to their needs

To help senior and geriatric pets have a more comfortable life as they age, consider these modifications:

Raise food and water bowls for easier use.

Dealing with grief after the loss of a pet

Give yourself time: Take time to grieve the loss of your pet and understand there’s no “right way” to mourn. Reach out to your workplace to ask about pet bereavement days, or consider using paid time off.

Expect the unexpected: Even if you’ve been preparing for the loss of your pet, the actual event might hit you harder than you anticipated. The grieving process can include feelings of shock, numbness, denial and anger. Allow yourself time to work through whatever emotions arise and avoid negative self-talk such as “I should be stronger than this” or “I’m just being overly emotional.”

Respect how others grieve: Remember there is no right or wrong way to grieve, and those around you might not show outward signs of mourning. Be as gentle with friends and family members as you are with yourself.

Reflect: Journal about your pet’s life, collect photos, draw pictures or use other creative outlets to help you remember your pet.

Take care of yourself: Make sure to eat healthy foods, try to stick to a sleep schedule, exercise (even just a quick walk around the block can help) and practice other forms of self-care.

Connect with others: Talk to a friend or family member about how you’re feeling. Spend time with your other pets while trying to maintain their schedule the best you can. They sense the loss, too.

Seek help: Online groups and books on grief can provide advice and support. Reach out to professionals whenever necessary.