Heading into the hurricanes

With your support, our Animal Rescue Team responds when disaster strikes.
BY Karen E. Lange
Share

The Animal Rescue Team helped farm animals trapped by floodwaters, pets who ran away when winds blew out windows and doors and shelter animals who needed a ride to safety during Hurricane Harvey.
Anthony Rathbun
/
AP Images for The HSUS

When a railroad track bed blocked their path, the two HSUS rescuers and the head of Beaumont’s animal shelter got out of their boat and waded a mile in the brown water pouring through the neighborhood. They pushed toward a house where the owner had reported a Chihuahua and kitten still inside. Residents of this city east of Houston had been forced to flee suddenly two days earlier when Hurricane Harvey swelled a river and authorities issued a mandatory evacuation order.

The submerged, eerily quiet streets smelled of household chemicals, gasoline, sewage and mold as trained responders Chris Schindler and Tara Loller—along with Beaumont Animal Services director Matthew Fortenberry—half walked, half swam their way through. They found the house, but the water around it was more than 6 feet deep, the current strong enough to sweep them away.

Fortunately, volunteers in a small boat appeared, gliding over the drowned yards and flooded cars. They ferried Loller to the back of the house, where she could hear a dog barking—the first sign the animals were still alive. Loller managed to crawl through a broken window as Schindler and Fortenberry swam hard and forced their way through the front door, where a refrigerator and other furniture had lodged.

Inside they found the Chihuahua, perched on top of a couch floating upsidedown in the floodwaters. He jumped eagerly into Loller’s arms. Then, following meows, the team searched out the kitten. At the height of the flood, the water had risen to 6 feet in the house; the cat had hidden in a dry space above a bedroom closet. Loller got on Schindler’s shoulders, stepped on his hands and launched herself up, pushing into the tiny space to pull out the frightened kitten.

The helpers in the boat carried Loller and the animals to a shallow spot and went back for Schindler and Fortenberry. There was a moment when the men had to let go of the house’s siding and jump for a rope so the boat could tow them to safety. Then it was over, two more lives saved in an immense disaster. “The odds were against them, but we were able to rescue them,” says Schindler. “It’s why we do what we do—to reunite people with their pets.”

The HSUS arrived in Corpus Christi as Harvey approached in late August and worked on the ground for more than two weeks alongside volunteers and local responders. Immediately after, in anticipation of Hurricane Irma, HSUS responders prepared to help in Florida. Irma hit hard across the state and left millions— including animal shelters and the HSUSaffiliated South Florida Wildlife Center— without power, water or phone service. At the wildlife center alone, damage from wind and downed trees is estimated at $350,000.

In Texas and in Florida, with the support of donors and partners such as the Houston Humane Society, Animal Investigations and Response, the Alachua County Humane Society, San Antonio Animal Care Services, Wings of Rescue, Greater Good and country star Miranda Lambert’s Mutt Nation, The HSUS transported out hundreds of animals who’d already been awaiting adoption before the storm, helping local organizations make room for evacuees’ pets and storm strays. The dogs and cats went to HSUS Emergency Placement Partners across the country.

As HSUS Texas senior state director Katie Jarl, Florida state director Kate MacFall and director of shelter outreach and policy engagement Kim Alboum organized the transports, Animal Rescue Team members, coordinated by senior director Sára Varsa, searched for missing pets and animals in need of rescue. Amidst the flood waters and as they receded, team members rescued animals in some of the hardest hit areas in each state. They used the lessons of Hurricane Katrina and Superstorm Sandy to save animals and help to reunite owners with their pets.

“We have come a long way,” says Varsa. “There’s just no comparison.”

Thanks to the federal Pet Evacuation and Transportation Standards (PETS) Act, passed in Katrina’s wake at the urging of The HSUS and other animal welfare groups, there were fewer animals left behind. The act requires requires state and local governments that want to qualify for funds from the Federal Emergency Management Agency (FEMA) to include animals in their disaster plans. During Harvey and Irma, responders rescued pets along with their owners, and most evacuation shelters accepted animals. 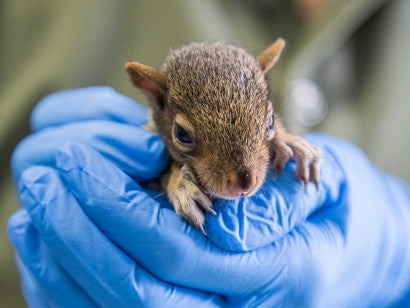 More than 50 baby squirrels were brought to the South Florida Wildlife Center in the first few days after Irma hit.
Jesus Aranguren
/
AP Images for The HSUS

The HSUS was there for any animal who needed help. The organization did aerial surveys in both states and found thousands of stranded cattle and horses. With the help of Texas’ and Florida’s extension services, Greater Good/Rescue Bank, Equine Rescue of Aiken and the Texas Air National Guard, The HSUS arranged deliveries of hay bales for the animals to eat. The HSUS and Emancipet also announced plans to provide three months of free veterinary care to residents of Houston, underwritten by a $500,000 grant from the Alex and Elisabeth Lewyt Charitable Trust.

As Irma neared the U.S., the South Florida Wildlife Center in Fort Lauderdale evacuated 250 animals to trained fosters. After the storm, despite significant damage and outages, the center accepted baby squirrels thrown out of trees, sea birds blown off course and raccoons driven by hunger into harm’s way. Staff patched calls to a cell phone, moved the hospital to a building with water and electricity and hoped they would soon have access to an X-ray machine and surgery suite.

It could have been far worse, says executive director Debra Parsons-Drake. “This was the largest mass storm that has ever hit Florida,” she says. “By being prepared, we’re back up in operation.”