First, do no harm

How grounding your compassion in knowledge can help injured and orphaned wildlife
BY Kelly L. Williams
Share

The woman on the phone was anxious but determined. She was calling City Wildlife, a rescue and rehabilitation center in Washington, D.C., because her dog had dug up a rabbit nest and killed three of the babies. There was one survivor. “I’m going to get some kitten formula and start feeding it, because that’s what I read on the internet,” she told the representative who took the call.

The woman had the best of intentions. She just wanted to help. But that kind of help would have ultimately killed the baby rabbit.

“The bunny wouldn’t be able to digest this milk,” explains Paula Goldberg, City Wildlife’s executive director. “The baby’s gut is disrupted. It gets a sort of colitis situation, and it’ll die.”

For animal lovers, the instinct to help can be difficult to ignore, especially when we see an animal who seems to be in trouble. But unless our good intentions are grounded in wildlife biology and best practices, we might actually harm the animals we’re trying to save.

“If you really care about them, it’s worth it to find out a little more,” says John Griffin, director of the HSUS urban wildlife section. By understanding how common species interact with their young and how to identify an orphaned or injured animal, it’s easier to provide the right kind of help—or figure out when none is needed. Here’s what you should know. 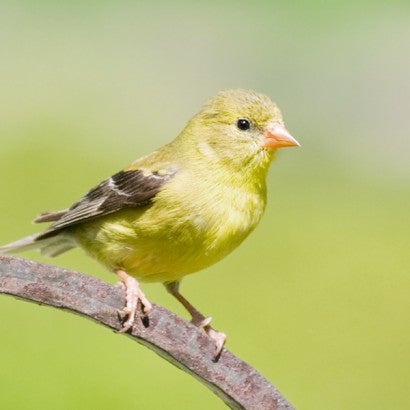 It's a common myth that mother birds will abandon their babies if a human touches them.
HFrankWI
/
iStock.com

Give missing moms a break

Deer moms don’t spend their days alongside their babies. Instead, they’re nearby foraging and trying to ensure their young don’t attract attention from predators. “The strategy the mom uses to raise these young is to leave them absolutely alone,” says Griffin. She’ll come back a few times a day—usually at dawn and dusk—to feed her babies. “If the fawn is quiet and in a ball and hiding,” says Griffin, don’t do anything. “But if he’s running around vocalizing like crazy, that’s when something is going on.”

Rabbit moms use the same rearing strategy, so don’t panic if you find an unattended nest. To determine whether a mama rabbit is returning to feed her young, cover the nest with a tic-tac-toe pattern of yarn or sticks. Check it 12 hours later. If it’s been moved and the babies seem content, you’ll know Mom stopped by.

To check whether a rabbit mother is returning to feed her young, lay sticks or yarn in a tic-tac-toe pattern across the nest.
Michelle Riley
/
The HSUS

Animals who nest in trees face unique challenges. Strong winds, rainstorms or human activities such as tree-cutting can easily knock baby squirrels and birds from their nests. If you see a baby bird on the ground, she might just be learning to fly. These fledglings look like adult birds, but without long tail feathers. They’re testing their wings—literally—and can fly wherever they need to go, under the watchful supervision of a parent. But nestlings—smaller birds without feathers—might need help getting back to the nest because adult birds don’t have the physical ability to pick up their babies from the ground. If the nest is visible, you can gently pick up the bird and place her back in it. (It’s a myth that a mother bird won’t touch her baby if she smells a human on it, says Griffin.) 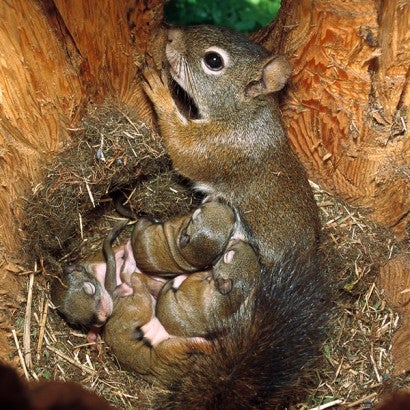 A squirrel parent peers out of the nest while the babies sleep.
Sumio Harada
/
Minden Pictures

Squirrel moms have the advantage of paws and can carry babies back to the nest, but they probably won’t do so if a human is too close. If you see a baby squirrel on the ground and you’re safely away from the road, observe from as far a distance as possible. Once Mom feels safe, she’ll scoop up the baby and bring him home. If the area presents too many dangers (such as free-roaming dogs or cats), the mom might be wary. In that case, White says, give Mom a safer way to retrieve the youngster by nailing a basket onto a tree. Just make sure it has small drainage holes; Griffin recommends using a berry basket. Then put the baby inside. If Mom doesn’t show up, call a rehabilitator.

To identify injuries, check for symmetry

If you see an animal who might be injured, Goldberg recommends observing her for as long as possible. “Look at the eyes to make sure that the eyes both look clear,” she says. “See if there are any obvious wounds.” Check for symmetry—are both eyes, wings or pairs of legs similar, or is the animal holding one foot or wing differently? If the animal appears stunned, give her some space—she might be standing still because she knows there’s a human in the area.

Once you’ve determined that the animal is injured, Griffin advises leaving her alone until you have a plan in place. “Call a wildlife rehabber right away,” he says. For your safety and the animal’s comfort, you’ll need to contain the animal for transport. A rehabber can give you guidance on how best to do this. 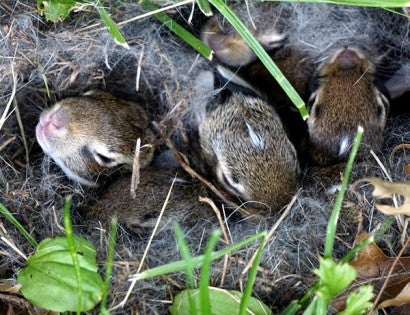 Rabbit moms leave their babies for up to 12 hours at a time.
StillBeYou_WIldlife
/
Alamy Stock Photo

When in doubt, call the pros

Whenever you’re dealing with wildlife, Griffin has three pieces of advice: “Don’t put yourself in danger. Don’t feed them. And don’t remove them without knowing where you’re going to take them.” Both Griffin and Goldberg recommend using your local wildlife rehabilitation center as a resource. “If you don’t know how to deal with the situation, call and know that you can get help,” says Goldberg.

By following these common-sense guidelines and by grounding your compassion in knowledge about different species, you’ll know when to help your wild neighbors—and when to let them be.

Find a wildlife rehabber in your area