How one woman and a small group of volunteers found homes for more than 900 horses
BY Kelly L. Williams
Share

Elaine Nash didn't know that the call she received in October 2016 would take her away from home for nearly a year, requiring all her professional skills and a healthy dose of fortitude. But even if she had known, she still would have taken it.

Elaine Nash, executive director of Fleet of Angels, gets a sniff from a curious stallion. Some of the "wild" stallions aren't so very wild after all.
Wendy Francisco

On the call, Nash learned that police in rural South Dakota had seized a group of horses when a veterinarian determined they were being neglected. The state’s attorney asked Nash to find homes for 270 of the horses.

Nash had no involvement with the seizure and didn’t live in South Dakota. But as the founder and executive director of Fleet of Angels—a nonprofit that connects horse adopters with affordable equine transporters—she was uniquely skilled to manage the crisis.

Rehoming 270 horses would have been enough of a challenge, but then Nash learned what was going to happen to the hundreds more horses who had been impounded. The original owner was unable to reimburse authorities for the cost of their care, so they would be put up for auction. Nash knew what would come next: So-called “kill buyers” would purchase the horses, then send them to slaughter in Mexico or Canada. She had to intercede.

Wild mares and youngsters, originally from the famous White Sands herd in New Mexico, recover in Colorado after surviving a harsh South Dakota winter with no shelter and little food.
Wendy Francisco

With the help of The HSUS and private donors, Fleet of Angels and partners raised funds to pay off the lien on the horses and cover their costs going forward—with the caveat that they had to take possession of them. As of December 2016, Fleet of Angels was on the hook to find homes for 907 horses in total. They had a name: the Hallelujah Horses. “The general public cheer was, ‘Well, hallelujah! We saved the horses from the auction,’” says Nash.

A small team convened in South Dakota, braving frigid weather. “Wind chills were down to 50 below zero; wind was up to 40 miles per hour. It snowed all day every day, hard blowing snow, for weeks,” says Nash. Many of the horses were ungelded stallions or wild mustangs who didn’t respect pens, and Nash’s team worked on foot to sort and ready them for adoption. “We didn’t have helicopters or horseback or four-wheelers,” she says. “It was all done just luring horses into pens with feed and getting little groups in at a time and trying to move them in the ice and the snow and the cold and the wind.”

The team could remain on the South Dakota property for 60 days before they needed to leave—along with any unadopted horses. Nash put the call out to a nationwide network of sanctuaries and individuals and began placing the horses. The team tried to honor the bonds between horses who were family or friends, requiring adopters to take at least two horses so they’d be more comfortable in their new homes.

In March, the 60 days were up. Ten semi-trucks ferried the remaining 312 horses from South Dakota to a property in Fort Collins, Colorado. Nash installed herself in a Days Inn about six miles from the property, recruited a local veterinarian to geld the stallions and set up a makeshift adoption operation. The work went on.

Eight months later, Nash still called the Days Inn home—but she and a tiny team had placed a majority of the horses. They’d simultaneously carried on with Fleet of Angels’ core work and provided disaster relief during hurricane season. “We evacuated hundreds of horses per day out of Florida in advance of Hurricane Irma,” says Nash. She and a volunteer even built an online directory that connected horses at risk during the hurricanes with folks who could offer hay, supplies, stables and more. 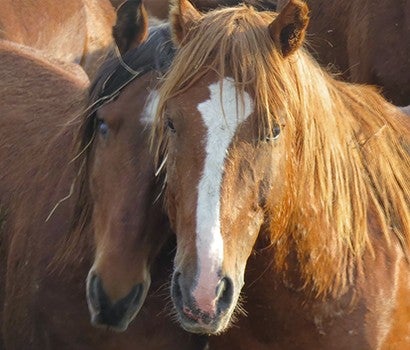 By November, just over 40 Hallelujah Horses remained, including a group of 20 stallions who were too old to geld. Many were blind. They helped each other, and they needed to be adopted together. “It’s a very special situation,” Nash says. Once again, the community stepped up. By the end of the month, adopters had been found for the remaining horses, and they were remaining on the property until Fleet of Angels could arrange transport—and Nash could check out of that Days Inn.

Cindy Gendron, manager of the HSUS-sponsored Homes for Horses Coalition, is proud of how the equine community came together to raise money and find adopters. “It’s been really a community effort. A national community effort,” she says.

Nash’s success isn’t just a feel-good story about a community coming together: Gendron believes it has profound implications. “The bigger picture that it teaches us is that there are homes for so-called unwanted horses,” she says. The pro-slaughter crowd argues that there are tens of thousands of horses who nobody wants, and that the only solution is to ship them off to slaughter. It’s simply not true, says Nash.

“If this tiny little group of people—which really boils down to no more than two or three most of the time—can save 907 starving and neglected horses, then just think what two or three people in every county or every town or every area in the country can do,” she says. “Slaughter is not needed.” The 907 Hallelujah Horses are living proof.