Behind the pet store façade, HSUS undercover investigation shows the USDA continues to fail animals and the public
BY Bethany W. Adams
Share

Chelsea Amengual had always wanted a dog, but her mom was allergic. So after graduating from Boston College and then settling in to her master’s program at Columbia University in New York City, she decided it was the right time to add her dream breed—a French bulldog—to her home and life.

Amengual first researched breed-specific rescues and breeders but couldn’t resist occasionally stopping by one of the city’s many pet stores to meet their French bulldog puppies. One of those stores, Citipups, is where she met Dijon (named for the city in France’s wine region) in late 2016. When Amengual visited a month later—just to look, she told herself—Dijon was still there. A staffer eventually told Amengual she could have Dijon for $2,500—half off. She couldn’t believe her luck. She made a deposit that day. 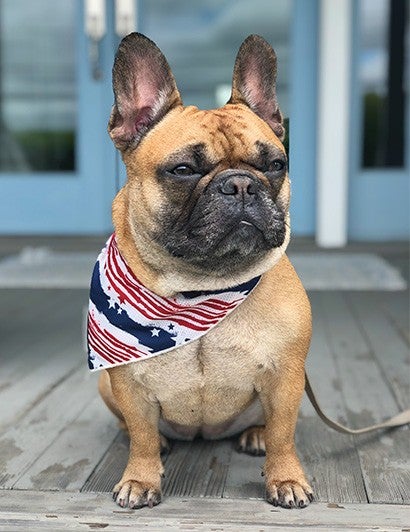 Dijon's health has improved since she was purchased from a pet store, but her family plans to adopt next time.
Chelsea Amengual

“I was very, very excited,” she says.

At the store, Amengual had thought Dijon was sleepy, but the day she brought the puppy home, a veterinarian diagnosed Dijon with kennel cough, an upper respiratory infection that can be caused by crowded conditions, and giardia, a diarrheal parasite common in poorly sanitized areas.

“If I look back on it, the times that I visited her at the store, she was really lethargic. … It’s because she was sick,” Amengual says, describing the swollen eyes and runny nose she hadn’t noticed at first. She suspects it’s why Dijon remained unsold for a month. “The [store] owner even said to me, ‘Oh, yeah. People wanted more of a puppy, like playful.’ ”

Amengual describes the next six months, during which Dijon recovered from kennel cough but continuously ate her own feces and reinfected herself with giardia, as a nightmare. Dijon had spent most of her life until then in a cage, possibly eating her own feces to keep her space clean. “That was something that we really had to train out of her,” says Amengual.

Angry and confused, Amengual reached out to Citipups, which refused to take responsibility for Dijon’s condition but eventually offered to “rehome” the dog.

“I don’t know what I was expecting from them or was expecting to get out of them,” she says. “Maybe more complimentary vet visits or a recommendation for a specialist, you know? But not that. No, you’re not taking her away from me.”

If I look back on it, the times that I visited her at the store, she was really lethargic. … It’s because she was sick.

Months after Dijon finally recovered, revealing a feisty personality, a friend sent Amengual the Humane Society of the United States’ report of its undercover investigation at Chelsea Kennel Club, another upscale Manhattan pet store. Employees there had been filmed handling puppies roughly, and the store’s owner had failed to obtain proper medical care for puppies with fevers, infections and illnesses. Amengual decided to submit her own complaint to the HSUS.

It turns out that Citipups is one of at least 50 stores (including Petland, the subject of multiple HSUS undercover investigations) that sourced puppies from one or more of the squalid puppy mills photographed during a recent HSUS undercover investigation. Dijon was born in a dismal mass-breeding facility in Macomb, Missouri, and spent the first months of her life in a puppy mill kennel and then a pet store cage.

In a Petland store in Novi, Michigan, a golden retriever puppy was still up for sale even though the dog was lethargic and had a runny nose.
The HSUS
At least 50 pet stores sourced dogs from puppy mills photographed during an HSUS undercover investigation.
The HSUS

Those in the animal welfare community know that the only protection the federal government offers animals sold in commerce—including household pets—is the Animal Welfare Act, which allows breeders to keep dogs in conditions most animal lovers would consider cruel.

What isn’t as commonly known is that the USDA inspectors entrusted with enforcing the act repeatedly find breeders in violation of even its minimal standards but fail to revoke their breeding licenses. The HSUS’s recent undercover investigation revealed just that: animals living in miserable conditions at dozens of licensed breeding facilities in the Midwest that have rarely, if ever, been cited for serious violations by the USDA.

Video footage shows dogs pacing and circling in cramped cages, many stacked three high with painful wire floors. Dogs at facilities like these—which we consider puppy mills—receive inadequate care and spend their entire lives in such cages, often exposed to heat or cold. Some puppy mills featured in the HSUS’s Horrible Hundred report, an annual sampling of problematic breeders throughout the country, have been found to “euthanize” unwanted dogs by gunshot. Four of the puppy mills photographed in 2020 have appeared in one or more of our Horrible Hundred reports.

Video footage shows dogs pacing and circling in cramped cages, many stacked three high with painful wire floors. Dogs at facilities like these receive inadequate care and spend their entire lives in such cages, often exposed to heat or cold.

Thanks to her ordeal, Amengual had long suspected that Dijon didn’t come from a homey family breeder, “but there’s still such a disconnect [from the puppy mill to] this dog now that has three beds in my apartment, and a ramp so she can get up onto the bed, and five sweatshirts because it gets cold outside,” Amengual says.

“I don’t regret it because I love her, but I realized that I wouldn’t do it again. I wouldn’t put myself in that position a second time. If and when I do get another dog, my boyfriend and I definitely want a rescue. We would never buy from a store, and I encourage people not to entertain the idea now.”

As of April 2021, the USDA had not revoked a single dog breeder license in more than two years.