Many Marches ago, as I mindlessly contorted myself to pull a deep-rooted weed from the garden patch, my thoughts turned longingly to the smell of fresh basil that would eventually grace what I saw as a still-barren vegetable graveyard.

This spot was not so lifeless as it appeared, I would soon learn, when the giant stalk squealed at me. Instinctively, I squealed back, not able to find words to convey my panic at having somehow cultivated the world’s first talking weed. My husband, occupied in the asparagus patch, came running over and bravely pulled back the tangled jungle just enough to reveal the real source: a nest of baby bunnies.

Hovering ominously nearby was our dog Mattie, who had long harbored a taste for rabbits but was still oblivious to this springtime treasure. Turning to our favorite resources for such situations, my husband and I found a simple solution: We stopped weeding the area temporarily and circled the patch with decorative garden fencing that would allow the young family to come and go while keeping mischievous border collie mixes at bay. We also placed twine in a crisscross pattern over the nest and kept watch. The next day, we were relieved to see the twine askew—a sign that the mama had returned to care for her babies.

Within two weeks, the rabbits were gone, safe from canine teeth and human carelessness, but the experience made me wonder: Who else is living in the detritus of last year’s garden, nesting and procreating in the spaces we treat like so much trash?

As it turns out, just beneath the surface of our leaf piles, decaying perennial stalks, grasses and patches of soil are many more species who, unlike our vociferous little rabbit family, have no voice to signal their presence. Swept up in the chaos of spring cleaning are caterpillars, moths, grasshoppers, praying mantids and other critters who not only enrich our world in their own right but also nourish birds, bats, opossums, raccoons and other species higher up the food chain.

As an animal advocate, I know about animals in factory farms, breeding mills, and other horrific situations. They’re hidden from view, maligned or mistreated for the sake of profit and treated by society as expendable. As a longtime gardener, I’m increasingly conscious of how our cultural ideal of manicured lawns and perfectly trimmed shrubs also leads to the suffering and untimely deaths of countless unseen, undervalued animals.

The difference is that, while our backyard creatures are often out of mind, they are not really out of our sight. By moving slowly and paying attention, anyone with even a small patch of land can have a hands-on role in protecting animals. Here are some ways to practice mindfulness in the spring garden:

Leaves provide a warm blanket for the chrysalises of luna moths as well as the eggs, caterpillars and pupae of many butterflies, who also overwinter in tree cavities, old branch piles and gardens. At my property, fallen leaves decay under trees and serve as mulch, providing rich natural fertilizer and habitat for these tiny creatures. It’s also important to look up when you’re scanning for new life; protect squirrel and bird nests by avoiding pruning until babies have left the coop.

Walk softly and be mindful of sticks

In the fall, I leave stalks of seed-bearing plants such as echinacea for goldfinches and other birds. In a frenzy to tidy the spring garden again, I used to cut or pull them down without much thought. But one year I discovered that some of those dead stems hold new life in the form of praying mantid egg cases, each bearing 100 to 200 eggs. They’re well camouflaged, resembling decayed leaves, but if you move slowly and look closely, you’ll know which stalks to let be.

Rabbits, turtles, and other creatures aren’t just hunkering down in the middle of last year’s vegetable garden. They may also be nesting in tall grasses, so do a walkabout on your property before mowing. And where possible, replace turfgrass with natives; carex and other sedges provide seed and shelter for wildlife. Replacing lawns will also help insects like grasshoppers, who are rich sources of protein for birds, raccoons, and other animals; the insects hatch in the spring from eggs that have overwintered in the ground, but all too often their life cycles are cut short by lawn chemicals and power tools.

Winged critters who awaken in early spring to a landscape of alien plant species won’t find enough food to survive; to a spring azure butterfly looking for a native flowering dogwood, the Korean kousa variety is useless. Don’t be tempted by the first pretty flowers you see at the local big-box garden center; head instead to local native plant sales.

It’s common practice to pull eastern tent caterpillars from trees or to avoid plants that attract them. But try not to fear what you don’t know, and consider the importance of such insects to other animals. Plums, black cherries, crab apples, and other trees host eastern tent caterpillars in early spring, providing sustenance for black- and yellow-billed cuckoos, as well as many other bird species and bats, throughout the season. 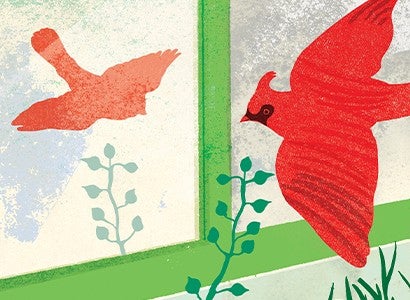 If you’ve ever had a bird attack your home window or car sideview mirror, you may have felt like a character in an Alfred Hitchcock movie. But there’s a reason behind the madness. In breeding and nesting seasons, some species—such as cardinals, mockingbirds, California towhees, and robins—are highly territorial. Breeding males see their reflection as a rival. Nesting females see a potential threat to their babies. Some birds may even defend foraging grounds from the perceived interloper.

HSUS wildlife specialist Janet Snyder remembers the first time she saw a bluebird attacking the sideview mirror on her parked car. “He’d retreat back, perch for a moment and then go at it again.”

The behavior is usually harmless to the bird, but in extreme cases it can cause stress and exhaustion, making the animal vulnerable to predators. Too much time fighting a nonexistent rival can also prevent a bird from mating, sitting on her nest or foraging for food.

Simple solutions include streaking soap across the outside of the glass or mirror to break up the reflection; placing cardboard, decals, netting or a screen over the surface; or trimming a branch to prevent the bird from perching near the offending image. To help her backyard bluebirds, Snyder devised her own solution; after parking her car, she ties plastic bags over the sideview mirrors during the spring and summer.