The Humane Society of the United States assisting the Burnside Police Department in rescuing approximately 150 exotic animals in an alleged severe neglect situation at a local pet store in Burnside, Ky.
Meredith Lee
/
The HSUS

At Tim’s Reptiles and Exotics, the bunnies looked “deflated.”

The rabbits at the Pulaski County, Kentucky, store were so undernourished, says Shalimar Oliver, animal crimes manager for the HSUS, that they had almost no body fat, leaving their skin and fur “rolling around” loosely. Their cages were rusted and full of cobwebs, and Oliver recalls a water bowl that “was just filled with black gunk, and there was nothing for them to drink.”

When Oliver came across a water dragon lying limp inside a cage, she initially thought the animal was dead. The store’s “beautiful” Burmese python appeared to have mites, an eye infection and upper respiratory issues, Oliver says. “She was blowing giant snot bubbles when we pulled her out of that enclosure.”

Some of the cages were so filthy and tanks so full of algae-laden water that “we couldn’t even see, at first, that there were actually fish or animals in them,” notes Adam Parascandola, HSUS vice president for Animal Rescue and Response. 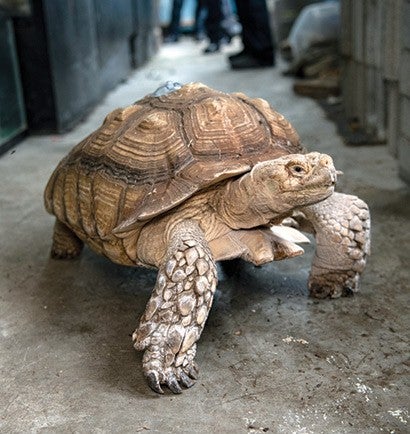 A sulcata tortoise repeatedly wandered toward the door, the only source of fresh air.
Meredith Lee
/
The HSUS

The HSUS assisted the Burnside Police Department with the Sept. 1 operation that rescued about 150 animals. After the store owner surrendered the animals and was arrested on 19 counts of animal cruelty, the animals were placed with rescue groups for specialized care and eventual adoption.

Burnside police chief Mike Hill requested help from the HSUS and other authorities. “He was incredible and refreshing in how proactive he was with this case,” Oliver says; he knew his department could handle the law enforcement elements but needed help with matters such as evidence collection and veterinary care.

Oliver hopes the case will have “ripple effects” for other communities facing animal abuse. Hill’s proactive approach, she says, “is going to inspire other agencies to reach out to him and say, ‘What did you do to make this work?’ ”