Diane Robinson shares a moment with a dog at Pen Pals Animal Shelter in Louisiana. The HSUS transported adoptable shelter animals to make room for those displaced by Hurricane Laura.
Tyler Kaufman
/
AP Images for The HSUS

In a year already disrupted by a global pandemic, this fall’s raging wildfires and active hurricane season meant our Animal Rescue Team had to be flexible, carefully evaluating each disaster and adapting their response for the greatest impact.

After years of disaster response, we’ve learned our rescue team can sometimes be most effective by evacuating unowned, adoptable animals from shelters and rescues before disaster strikes. The animals then go to our shelter and rescue partners, allowing local organizations to focus resources on animals directly affected by disasters. 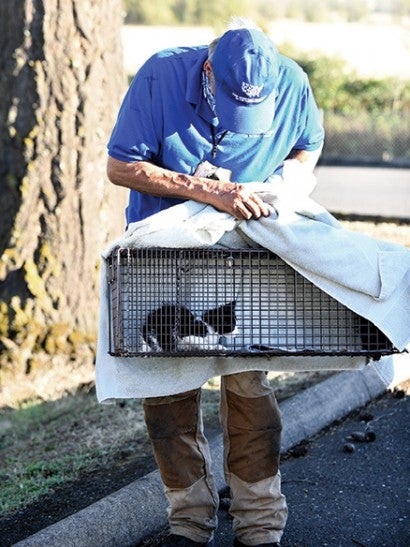 “These people who are responsible for helping the community during a disaster are also victims of the disaster themselves,” says Diane Robinson, HSUS program manager for disaster services. “By us moving all these adoptable animals out of the facility, it takes a lot of the pressure off them.”

In August, the team deployed to the Gulf Coast ahead of tropical storms Marco and Laura (both of which later became hurricanes), which were predicted to hit the area just days apart. The team transported 288 animals to shelter and rescue partners in North Carolina and Tennessee.

One difficulty in disaster response, Robinson says, is the unpredictability of storms. After Hurricane Sally took an unexpected turn in September, the team deployed to Escambia County, Florida. Entire communities, including the local shelter, were left without power and many areas were flooded. The team transported 46 adoptable animals out of the county shelter and distributed pet food. Here, rescuers met Pixie, a cat with a cut on her leg from the storm. The family’s car had been damaged, so rescuers transported Pixie to and from the veterinarian.

Sometimes we can help from afar. In October, as Hurricane Delta threatened to hit Louisiana, the HSUS funded the transport of 103 animals with Wings of Rescue, an organization that flies animals to safety.

During this volatile year, rescuers helped both individuals and whole communities. In Florida, Pixie is recuperating with her family. And in Oregon, Pauli provided local groups with transfer cages (for safely moving animals) they can use during future disasters.