It was hot last August and the waters of Lake Superior near Grand Marais, Minnesota, looked inviting. First, Lynne Buchanan’s son’s girlfriend and then Buchanan’s 55-pound labradoodle, Takoda, jumped in. Finally, Buchanan herself joined them. The water looked clear but she noticed debris floating toward the surface from the rocks on the bottom, stirred up by their splashing and paddling.

After the swim, Buchanan left Takoda with her son and went for a hike. A few hours later, she got a text: “Your dog is in total distress. Get home.” Takoda had run off into the woods and started vomiting. By the time Buchanan arrived, there was nothing more coming up. Takoda was foaming at the mouth and making desperate sounds. “I thought he was dying,” Buchanan says. 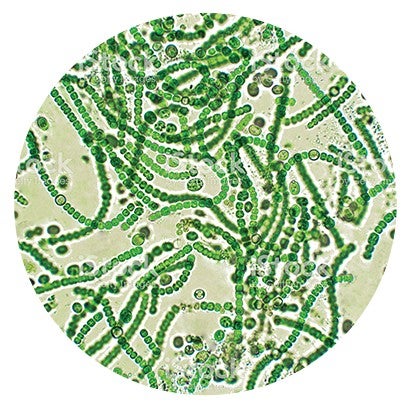 They drove the dog to a nearby vet who guessed it was a twisted stomach and sent them to another vet two hours away for surgery. The second vet said he could either euthanize Takoda or open him up to try to save him. The operation would cost $5,000. Buchanan said to go ahead. The dog’s stomach wasn’t twisted, but his spleen was swollen. The vet drained fluid from Takoda’s abdomen, and the dog recovered within a couple of days.

Though it can’t be confirmed, Buchanan suspects what sickened her otherwise healthy, young dog was toxic blue-green algae, known to scientists as cyanobacteria. In the rush to get Takoda treated, Buchanan didn’t take a sample of the water where they swam nor the muck stirred up from the bottom. But what happened to Takoda fits a pattern of dogs swimming in or playing near water then suddenly becoming very sick and even dying, says Dr. Barbara Hodges, director of advocacy and outreach for the Humane Society Veterinary Medical Association.

Researchers have tracked confirmed cyanobacteria poisonings of animals since 1878. Dogs are particularly susceptible because they drink water when they swim or play in muck on the shore then lick their wet coats. Toxic cyanobacteria can multiply in warm, stagnant, nutrient-rich water. The toxic blooms often appear blue or green, but can be other colors and can hide on pond and lake bottoms or shores. They’ve been identified in all 50 states and have occurred as far north as Finland and Alberta and Manitoba in Canada. And with the higher temperatures and droughts that accompany global warming, as well as increased nutrient runoff from lawns and farms, they appear to be on the rise, says Val Beasley, professor of veterinary, wildlife and ecological toxicology at Penn State.

A 2015 paper reported more than 100 confirmed dog deaths from toxic algae in the United States during the past 80 years. That is bound to be lower than the actual number, Beasley says. Some dogs may not be taken to a vet, and some animal owners may be unwilling to pay for analyses for toxins.

Last summer, Melissa Martin took her three dogs on a walk in Wilmington, North Carolina. They stopped at a pond with clear water. Martin’s labradoodle, Harpo, went in. Izzy and Abby, Martin’s two West Highland terriers, got dirty playing on the edge, attracted to something in the mud. When Harpo emerged he licked the muck off Izzy and Abby. All three developed seizures and were dead by the next morning. “It was a tragic, horrible, traumatic death,” says Martin, who many months later is still grieving.

Water from the pond was tested four days afterward and showed relatively low levels of a toxin, not enough to confirm that toxic algae caused the dogs’ deaths or to rule it out. (Cyanobacteria blooms can appear and disappear quickly.) Martin got the city to put up a sign at the pond warning of the danger. She continues to push for signs at other ponds and is working with vets to inform their clients about the risk.

Experts say the best way to protect dogs is to keep them away from outdoor bodies of water—ponds, lakes, sluggish rivers, even bird baths—especially in the summer. That means leashing dogs, says Hodges. “If you had a toddler, would you let your child run ahead of you on the trail [out of sight]?” she says. “Think of your dog that way.”

What to watch for

If your pet has swallowed blue-green algae—and especially if she develops these kinds of problems after exposure to water, mud or debris along the shore—rinse her coat off as soon as possible, call a vet to alert them to the emergency and rush your dog for medical treatment. If you can, collect a water sample. If tests confirm toxic cyanobacteria, officials can place a warning sign.