Saved in the nick of time

A puppy mill raid keeps a mother and her puppies alive
BY Karen E. Lange
Share

Pearl (left) and most of her puppies survived (right), but experts say the case shows the need for laws that require breeder licensing and inspection.
Pearl: Brent B. Clark/AP Images for The HSUS; Puppies: Alina Soderholm

Had it not been for the call to animal control in Caldwell County, North Carolina, last December, Pearl and her seven puppies most likely would have died and been buried unnoticed on a breeder’s property. Instead, when officer Tracy McGuirt responded to a report that someone had killed a dog with a pitchfork, she found another dog, emaciated and worm-ridden, lying in the American Kennel Club breeder’s driveway, giving birth. Three of the four puppies who had already been born to the Weimaraner were dead. Pearl and two puppies not yet born were saved only through an emergency delivery and C-section. Then came round-the-clock tube and bottle feedings (Pearl had no access to food and had been eating wood chips; she was not producing milk). 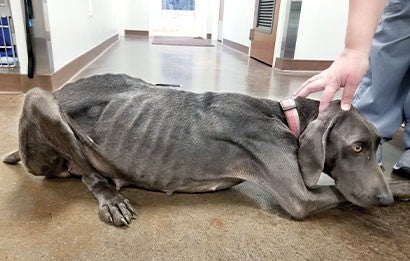 This is how Pearl looked when an animal control officer found her giving birth. The North Carolina breeder said she didn’t know Pearl was pregnant.
Alina Soderholm

McGuirt got a warrant and the next day seized 33 dogs and a kitten, taking advantage of a state animal cruelty law the Humane Society of the United States helped put in place. Pearl ended up on the cover of 2020's The Horrible Hundred, an HSUS report on problematic breeders throughout the country. The breeder, who had cultivated a wholesome image on Facebook, was charged with animal cruelty.

“She was pretty much just caring for the ones that would bring her a profit,” says Dr. Alina Soderholm, the veterinarian who saved Pearl and her puppies.

Although people who abuse animals in North Carolina can be required to pay for the care of seized animals while cases are in court, the prosecutor did not invoke that law, placing a burden on the Caldwell County shelter. But the HSUS helped cover the cost of their care, and HSUS staff visited the animals in the shelter, documenting their poor condition to support the charge of animal cruelty. After eight months, the breeder pleaded guilty. She was allowed to keep just one dog and sentenced to 18 months’ probation, during which she cannot breed animals.

Until the animal control officer stepped onto her property, Pearl’s breeder was allowed to operate without a license or USDA inspections, since she claimed she sold to the public only through face-to-face transactions. HSUS North Carolina state director Gail Thomssen says the state needs a law that would require all breeders to be licensed and inspected and limit the number of dogs they could own.

One of Pearl’s puppies stayed with Soderholm and the other two were adopted early in 2020. Their mom, held as evidence, had to wait. In September, Pearl finally went to a loving home. She snuggles on the couch with her new owner. She has gained 15 pounds.

TAKE ACTION Contact your members of Congress to support the Puppy Protection Act, H.R. 2442/S. 4757, which would require federally licensed breeders to give dogs bigger enclosures with solid floors, protection from the elements, proper veterinary care and exercise.