The HSUS and HSI help communities worldwide learn to coexist with grizzlies and other native carnivores
BY Karen E. Lange
Share

Grizzly bears began arriving in northwestern Montana’s Blackfoot Valley in the late 1990s. Their population in surrounding mountains multiplied and gradually spread out, coming down from higher elevations into the green pastures of cattle country to search for food, returning to habitat bears had lived in centuries before.

Wayne Slaght, who grew up raising cattle on a 21,000-acre ranch he manages, says he was the first valley rancher to see them. The bears were drawn to calving areas and the smell of cow carcasses piled nearby on Slaght’s Two Creek Monture Ranch in Ovando. Slaght carried neither bear spray nor a firearm, but he and his wife started taking radios with them so they wouldn’t be stranded alone if they ran into a bear. Slaght told his teenage sons to carry guns and avoid the banks of the creeks, where they might chance into the bears in heavy brush. 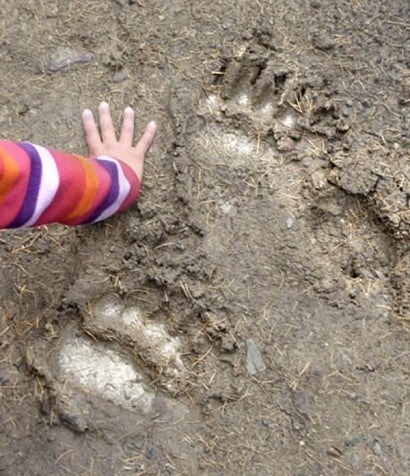 A grizzly left pawprints on the muddy floor of the Blackfoot Valley. Bear signs are common since the 1990s.
Steve Kloetzel

It wasn’t long before a bear killed one of Slaght’s calves. It happened just 500 yards from his house. In response, the U.S. Fish and Wildlife Service and the Montana Department of Fish, Wildlife and Parks trapped and relocated a few bears, but another calf was killed in 1998, and two more calves the following year. When Slaght could recover the bodies quickly enough to prove bears had fed on them before death, he was compensated by the state. He wasn’t happy seeing his animals killed, though. And he wasn’t the only rancher in the valley having problems. Others also lost calves, and many, including Slaght, wanted to hunt the bears, in defiance of federal law.

In the fall of 2001, the situation came to a head when a hunter shot an elk in the Blackfoot-Clearwater Wildlife Management Area, around 5 miles from Slaght’s ranch. While the man was at his truck gathering butchering tools, a grizzly sow and her two cubs followed the smell toward the clearing where the dead elk lay. When the hunter returned, the bears came out to feed, and the mother bear attacked and killed the man.

The death shocked the community. State and federal wildlife officials trapped and killed both the sow and her cubs, but the public wanted more done. And so began two experiments seeking ways to coexist with the bears. In the Blackfoot Valley, a conservation group called the Blackfoot Challenge formed a wildlife committee to develop solutions for ranchers. In the nearby Swan Valley, Swan Valley Bear Resources offered residents help. The approach these groups developed has become a model for programs across the country. This year, Humane Society International is transplanting it across the Atlantic—in Romania. 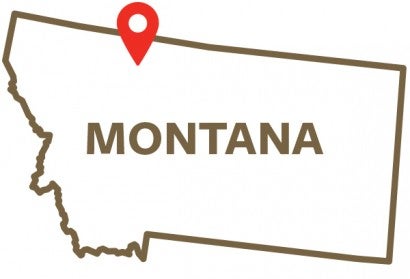 Grizzlies in Montana's Blackfoot Valley may someday link with Yellowstone bears to the south.

As a result, human–bear conflict fell by 74%. There were no more grizzly attacks on people, and after 2004 attacks on farm animals tapered to near zero, despite the bear population growing 3% a year. The human-caused grizzly deaths fell, too.

Though Slaght’s ranch has perhaps the highest concentration of bears in the valley—an estimated eight to 12 at any one time—he hasn’t lost another calf in 20 years. He and his cattle have gotten used to the grizzlies.

“The first year I’d just as soon all the bears were dead,” says Slaght. But “the bears are here, you’re not going to get rid of them. We’ve got to coexist.”

The immediate response of some people to native carnivores—bears, wolves, mountain lions—is to want to kill them. The Humane Society of the United States and HSI regularly fight such proposals because they are both inhumane and ineffective. Indiscriminate hunting does nothing to reduce attacks by carnivores who have become habituated to humans and learned to eat farm animals or garbage. It also can disrupt carnivore social systems, leading to even more attacks on farm animals by young carnivores who move into new territories.

A 2019 data analysis by the HSUS shows that grizzlies, wolves and mountain lions actually account for very few farm animal deaths in the U.S.—far less than 1%. Usually, calves and lambs are lost to disease, weather and complications during birth. However, grizzlies, wolves and mountain lions are often portrayed as major threats to farm animals. Removing federal or state protections and hunting them is frequently suggested as a solution. Wendy Keefover, HSUS native carnivore protection manager, says that’s partly because the USDA—whose Wildlife Services division uses taxpayer dollars to kill coyotes, wolves and other native carnivores in response to ranchers’ complaints—greatly exaggerates predators’ impact on cattle and sheep.

Ranchers understandably get emotional about the deaths of calves. They also worry about the presence of carnivores stressing their animals, reducing weight and conception rates. The Blackfoot Challenge and Swan Valley Bear Resources have defused much of this anger and anxiety by creating relationships. Wildlife officials and conservationists traveled to meet with ranchers and landowners, listening to their problems and delivering solutions (for example, mapping software revealed the huge role carcass piles played in attracting grizzlies).

“It’s about building trust between the ranching community and those who love wildlife,” says Seth Wilson, executive director of the Blackfoot Challenge and coordinator of the wildlife committee for its first 14 years. “You can have lots of conflicts with a small population of bears, or you can have very few conflicts with a large population of bears. It’s how we decide to behave as people.”

Slaght attributes the program’s success on his ranch to three things: electrified fencing around 770 acres where calves are born and graze; storing feed in bear-impenetrable heavy steel railroad cars; and quick carcass removal—during calving season, trucks come twice a week to pick them up. Slaght says he’s no bear lover, but he has learned to live with grizzles because that allows him and his family to stay on the land. 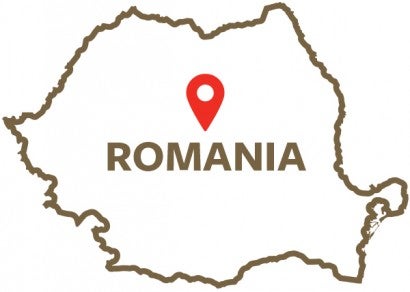 It’s a method the HSUS promotes in the West and HSI is now carrying to Eastern Europe. In Romania, near densely populated cities and towns that border the Carpathian Mountains, live 5,000 to 7,000 brown bears (the same species as grizzlies; the difference in name is based on where the bears live). A far bigger population than the grizzlies of the U.S.’s lower 48, the Romanian bears have become the target of angry rhetoric and trophy hunters’ guns.

The Romanian government banned trophy hunting of bears in 2016, but hunters still stock feeding sites with apples, bacon, corn and candy. The sites are designed to attract wild pigs but frequently draw bears into dangerous encounters with people. Bears are also losing their forest home and their natural sources of food. Illegal logging has destroyed bear habitat, and expanding cities and suburbs are encroaching on their territories. People are going into the forest to commercially gather berries and mushrooms, ride dirt bikes, ski at new resorts and visit vacation homes. Tourists lure bears to roadsides for selfies. As a result, habituated bears are hit by cars, harm fruit trees, eat sheep and wander into city centers. The government has responded by killing bears. The media runs sensational stories about bear attacks.

Adam Peyman, wildlife programs and operations manager for HSI, says nonlethal prevention would be cheaper and more sustainable. “Shooting isn’t going to solve your problem,” says Peyman. “What you need to do is protect your livelihoods in a way that allows bears to coexist with humans.”

In 2018, a group of nine Romanians, including a pro-hunting politician and a conservationist who has pioneered nonlethal conflict prevention in Romania, visited the Blackfoot and Swan valleys to see what’s possible. The group visited Slaght’s ranch to hear how he’s gone from wanting to kill bears to coexisting with them. Luke Lamar, conservation director for Swan Valley Bear Resources, showed participants the teeth marks on the lids of bear-resistant garbage bins his organization lends to residents: Not one grizzly had managed to break in. Lamar took the group to a backyard chicken coop that bore fresh claw marks from a grizzly. A family had lost four birds. The next day, Swan Valley Bear Resources put up an electric fence.

This year, HSI will work with one or two counties in Romania whose farmers and shepherds are open to adopting this approach and launch a project like the Blackfoot Challenge, says Peyman. HSI wants to use community-based outreach to show the public and the government how conflict prevention can work effectively.

It will not be easy. In many parts of the country, hostility toward bears is so great that the Blackfoot and Swan Valley models would be a hard sell.

No one knows how many brown bears there actually are—a scientific study has not yet been done—but last year trophy hunters said there were too many and lobbied hard to once more be able to hunt them, despite a European Union ban authorizing the killing of bears only under very restrictive conditions. HSI joined with Romania-based groups to help stop that proposal. Now the goal is to win support for a new approach that is actually very old: For centuries, Romanians have coexisted with bears.

HSI/Romania’s new country director, Andreea Roseti, grew up in Romania and remembers a time when people had a different relationship with bears and wildlife, when they accepted that they could not safely go into the woods at night, when skilled shepherds watched over sheep and owners expected some losses—the blame was on the shepherd, not the wild animal. “That was natural, that was normal,” she says. “Now a lot of things that were natural, that were normal, aren’t. People who do not know anything about wildlife or have never seen a bear consider that there are too many of them and they are a danger.”

Roseti knows that her country cannot go back to that earlier era, but she is hoping Romanians can find a new way to live with their bears. Just like in the Blackfoot and Swan valleys, it will come through working with individual farmers and communities, changing the way people think about bears and reminding them that humans and bears have always shared the land.

Avoid conflicts with bears, wolves and coyotes by: