Americans’ demand for cheap meat has forced factory-farm broiler chickens to grow faster and larger than ever before
BY Karen E. Lange
Share

Fresh from the trauma of World War II, mid-century Americans imagined a peaceful, prosperous future. They dreamed of moon rockets and flying cars. They envisioned house-cleaning robots. And, after years of rationing, they hoped for bountiful meals. Most particularly, they hungered for chicken. But not the scrawny, spent laying hens, exhausted from their lives producing eggs, that Americans ate when beef and pork were scarce. Instead, they looked forward to the bird of the future—bigger, better.

Americans' demand for cheap meat has forced factory farm chickens to grow faster and larger than ever before—dooming them to a life of suffering inside bodies too monstrous to move.
Joel Sartore
/
National Geographic Photo Ark/National Geographic Creative

The A&P grocery chain invited poultry producers to enter a nationwide contest. Farmers sent eggs from their plumpest birds to a U.S. Department of Agriculture station on Maryland’s eastern shore. Researchers selected and bred birds who were larger and faster-growing to create a new type of chicken, “a broad-breasted bird with bigger drumsticks, plumper thighs and layers of white meat,” according to writer and broadcaster Lowell Thomas, who narrated a documentary sponsored by Texaco. It would be, proclaimed the film’s title, “The Chicken of Tomorrow.”

Over decades, America got all that and more.

As the winning chicks, hatched in 1948, were used to breed the strains now used by large-scale commercial farms, the time needed to raise a “broiler”—a chicken raised for meat—dropped from 12 weeks to six or less, the feed required fell by half and the growth rate multiplied by four. The amount of breast meat on an individual bird rose by nearly 70 percent. By 1978, a pound of chicken, which in 1922 had cost around $5.50 in today’s dollars, cost just $2.46. Per capita, chicken consumption grew four-fold, and a whole new industry emerged, dominated by factory farms controlled by corporations such as Tyson and Pilgrim’s Pride. 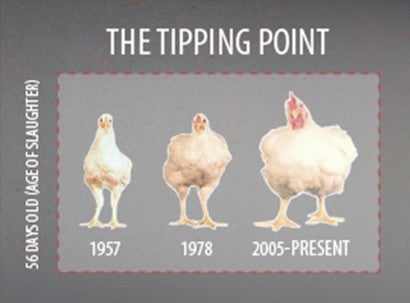 At 56 days old, when chickens are typically sent to slaughter, today's broilers are much larger than broilers of the past.
Poultry Science Association

A recent paper shows the consequences: Scientists at a research farm in Alberta that has continued to breed earlier strains of chickens took pictures of a 1956 type broiler, a 1978 broiler and a 2005 broiler, all 8 weeks old, and placed the photos side by side. The result is unsettling: On the left, a comparatively fit bird (1956), in the center a plump chicken (1978) who appears “normal” (if you don’t know how chickens used to look), and on the right, the “chicken of tomorrow,” a morbidly obese bird (2005) who appears monstrous next to the others. By modern standards, she’s a week or two past the date when she would be slaughtered for meat and she’s at high risk for heart failure. She’s a juvenile, but the size of her body has outgrown the capacity of her bones and joints, muscles and organs to support it, says John Webster, professor emeritus of animal husbandry at the University of Bristol.

“If [broilers] weren’t killed at 42 days, they wouldn’t survive another two weeks,” he says.

Broilers are the only livestock that are in chronic pain for the last 20 percent of their lives. They don't move around much… because it hurts their joints so much.

John Webster, Professor Emeritus at the University of Bristol

During the last days of their lives, about a third of broiler chickens suffer leg problems so severe they struggle to walk. Factory-farm workers move through buildings to collect dead birds and break the necks of lame ones. Survivors huddle on the floor, trapped by their own bodies. Unable to escape the pain, they lie in litter strewn with their own waste. Ammonia burns their breasts and often blisters their skin and feet.

In 2016, the HSUS launched a campaign to end these kinds of conditions. In June, Perdue became the first major producer to commit to reform. Major buyers followed.

The initiative comes after years of research have documented the suffering produced by the birds’ genetics. Before joining the HSUS-affiliate Humane Society International, Sara Shields studied whether farmers could encourage broilers to dustbathe and improve their welfare through increased exercise. But she found that because of their size, dustbathing was not enough and by the time the birds approached the market weight they did not engage in much behavior beyond sitting and eating.

What has taken place is the opposite of Darwinian selection, Webster says, “They’ve destroyed the fitness of the bird in order to produce the most meat.”

With approximately 9 billion broilers raised and slaughtered each year in the U.S. alone (60 billion worldwide), Webster calls the broiler industry the single greatest example of human inhumanity toward another animal. It’s why Shields chose chickens as the subject of her doctoral dissertation.

“If an animal only has six weeks to live, it’s really important that they have a positive experience,” she says, “because that’s all they’ve got—six weeks.”

Chickens raised for meat spend their days in dark barns where they often sit on the floor in their own waste.
Mercy for Animals

But to improve quality of life, breeders must change broiler genetics so birds grow more slowly and can live longer, Webster, Shields and other experts say. Fortunately, breeders still have small supplies of slower-growing chicks that can be used to reform the industry. In the United Kingdom, grocery stores competing for customers are already selling birds that take 10 weeks to reach market weight. In the United States, at the urging of the HSUS and other animal welfare groups, producers and buyers are beginning to shift toward this. There is also hope that researchers can eventually breed a faster-growing bird that is healthy and walks without pain.

The HSUS has worked with Perdue, one of the country’s largest producers, to develop a reform plan that includes changing the type of broilers farmers raise and offering birds more room. Late in 2016, the five largest food service companies in the country, which together buy more than 115 million chickens a year—Compass Group, Sodexo, Aramark, Delaware North and Centerplate—announced with the HSUS that by 2024 they will adopt a new Global Animal Partnership standard for healthier breeds of chickens, better living conditions and increased space per bird.

Starbucks and Panera Bread have announced a similar policy. Aside from ensuring better lives for the chickens, the companies are also mandating a slaughter method that avoids excessively inhumane practices and instead uses a multistep controlled-atmosphere processing system that renders chickens unconscious so they suffer less.

Josh Balk, the HSUS vice president of farm animal protection, says the organization is meeting with other major companies. “It will take years to make these changes happen,” he says. “We have to start now.”

Modern broilers are raised in starkly different ways: Factory farms stock the fastest-growing birds, while some smaller farms let slower-growing birds roam outside. As the HSUS transforms the industry, bigger farms will switch to healthier birds able to lead better lives, even if they are still indoors. 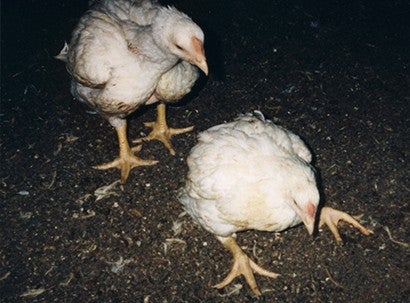 Due to their unnatural size, many chickens suffer painful injuries and are unable to walk.
Compassion Over Killing

Walk into one of the windowless, dimly lit factory farms where most U.S. broilers are raised, and you’re likely to see tens of thousands of obese birds, barely stirring, sitting on the floor in their own waste. They have been selected for massive appetites, bred to eat and sit. Many of the birds have painful leg and joint problems that make walking difficult. They’re confined so close together that they jostle one another. This, plus the absence of a natural light-dark cycle, prevents sleep, which is critical for young, growing animals. It’s a scene of quiet misery. There’s a stench of ammonia. The birds’ bodies are on the brink of giving out. So extreme is the stress that in order for breeder broilers to survive long enough to lay eggs (about 20 weeks), producers must restrict their feed intake, sometimes feeding them only every other day. Broilers raised to be eaten usually die at 6 weeks, says Shields. “They still peep like baby chicks when they’re slaughtered.”

The chickens at White Oaks Pastures, owned by the HSUS state agriculture advisory council member Will Harris in Bluffton, Georgia, are very different because of their genetics, behavior and environment. Place a factory farm broiler outside to forage for food and move with a flock, and that chicken probably would not survive, Harris says. Using chicks who genetically resemble birds from the 1950s, Harris puts his birds out on pasture to do what chickens evolved to: search out insects and other edible morsels by scratching the soil, all the while fertilizing dirt with their manure. They walk miles each day before they roost in mobile houses that are towed to different spots. At 12 weeks, they reach 3 to 4 pounds and are slaughtered on the farm. The price consumers pay, via the White Oak Pastures website, is around $4 per pound—more than three times what conventional chicken meat costs. It’s a struggle to find people to spend that, says Harris, who has turned a profit with pasture-raised cows and pigs but not so far with chickens: “Consumers will either support humane production, and it will thrive, or they will not, and it will perish.”

On Will Harris' farm in Georgia, broiler chickens grow at a healthier rate and have room to roam.
Julie Busch Branaman
/
For The HSUS

The HSUS is encouraging producers to breed healthier broilers who live free from pain and engage in typical chicken behaviors—in other words, to be like chickens were until the push for maximum efficiency altered their genetic makeup. Given a modest increase in space (at least 1 square foot per six pounds of animal) along with more natural light, better litter quality and hay bales, their lives will be substantially altered. They will walk around, dust bathe, peck and perch. For the birds, a lifetime of misery will be turned into an existence that allows for a little bit of pleasure. Webster, the professor in the U.K., has seen it happen. Chickens there live in conditions that allow them to demonstrate their intelligence and engaging personalities. When a human visitor arrives, they rush forward to greet him. “The big movement is to get a better bird,” he says. “Once you’ve got a better bird, you can give it a better life.”