Trust in the wild

Whitetail dragonflies, hawks and pronghorns were just a few of the animals documented at Demetriades Wildlife Sanctuary in Montana.
Pronghorn: Alice henderson; All other photos: Jason Patnode

Imagine venturing so far into nature that your only surroundings are the beauty of the landscape, the sky and the wildlife living in that unspoiled habitat. Two volunteers for the Humane Society Wildlife Land Trust, an affiliate of The HSUS, recently did just that, visiting protected land to observe and document the animals living there. The Trust has 116 sanctuaries in the United States and Canada, preserving more than 20,000 acres and countless species of endangered, threatened and vulnerable animals. The lands are protected from hunting and provide safe habitat for native carnivores who are critical to the ecosystem.

Alice Henderson, a wildlife researcher and rehabilitator, and Jason Patnode, a photographer, filmmaker and wildlife rehabilitator, got to see and hear some of those animals during their two-month road trip to seven Trust sanctuaries and one prospective site. Using special equipment, they recorded ultrasonic calls of bats and audible calls of birds, amphibians, coyotes and other wildlife at each site to identify the unique species living in the habitat. Here are a few of their photos from the field, along with highlights from Henderson’s log entries.

New Mexico is certainly the Land of Enchantment. We were treated to some stunningly fiery sunsets with great, towering thunderheads above. Insects sang in the warm desert night, and we saw scurrying horned lizards, bats and many birds, including a loggerhead shrike [a species in decline because of habitat loss]. As we recorded bats in the evening, the wind brought with it the fresh scent of creosote bushes, and the stars spanned the dark sky in a glorious arc of glittering lights. I was thrilled to record my dream bat here—the greater bonneted bat. With a two-foot wingspan, this bat enjoys roosting in cliffs and has an echolocation call that’s audible to humans.

Pronghorns browsed in the sagebrush beneath some of the most stunning sunsets we’d ever seen. Carrying a telephoto lens, Jason crawled on his belly through a field for a quarter of a mile to get photos of a sandhill crane family. We also saw eagles, trumpeter swans, badgers and moose, and we conducted a bat survey. We did Bortle dark-sky tests here and at each of the sanctuaries and found some truly valuable and preserved darkness [see below]. Dark skies are another benefit of protecting habitat, as they’re vital to migratory birds who use the stars to navigate.

We experienced some terrific thunderstorms at Meadowcreek, with thunder booming and resonating down the valleys. Huge thunderhead clouds built up in the warm afternoons, unleashing torrents of rain. At night, lightning flashed in every part of the sky. But the near-constant thunderstorms didn’t keep the bats from their nightly flights to feed on insects over the river and lush meadows. We were thrilled to record the gray and Indiana bat species, both endangered, as well as a multitude of frogs and toads. As we waded down the creek, looking for a good place to set up the bioacoustic recorders, a deer suddenly came splashing into the water and leaping toward us. A coyote was in close pursuit! Upon encountering us, they each chose to head a different way. We watched river otters rolling in the crystal-clear water, and with an underwater camera, we recorded footage of the yellowcheek darter, a federally listed endangered fish. At night, we heard whip-poor-wills, Eastern screech owls and barred owls calling, and coyotes yipping and singing in the distance.

We recorded a number of bat species foraging, despite some pretty intense thunderstorms. During the day, we heard American goldfinches and cardinals singing and the drumming and calling of hairy woodpeckers. One of the most moving aspects of our trip was spending time with like-minded people. Standing out under the stars with landowner Harold Lindebo, we used our night-vision scope to watch bats emerge from a barn. They wriggled out of the eaves and took flight. We were recording their ultrasonic calls and noticed that when they returned, they’d announce their arrival quite audibly for us before tucking back in under the eaves. Meteors streaked across the dark sky and we chatted companionably about the wonders of wildlife. It was magical.

We saw an incredible variety of dragonflies, armadillos, wild boars and many migratory birds, including the scissor-tailed flycatcher. While we were taking photos of the Milky Way, a snuffling sound drew our attention to the ground. Two armadillos meandered by, digging and eating. They returned every night. Our underwater camera picked up charming footage of a smiling red-eared slider turtle who explored the lens. And each time we headed out to the vernal pools to check on our remote cameras and recorders, we happened across the same cottonmouth snake, cooling himself in a little mud wallow he’d staked out as his own.

To rate the darkness of the sky, researchers like Henderson and Patnode use the Bortle Dark-Sky Scale. They look for certain objects in the night sky that are difficult to see with the naked eye, such as the Milky Way or various constellations. They also document “light domes,” bright arcs of light over cities, to determine the sky’s rating. The lower the Bortle number, the darker the sky. A ‘1’ is an absolutely dark sky, like what you might find in very rural areas. A ‘9’ is a bright sky such as what you’d see over a big city such as Dallas, where you can only pick out a handful of stars because of the extreme light pollution. 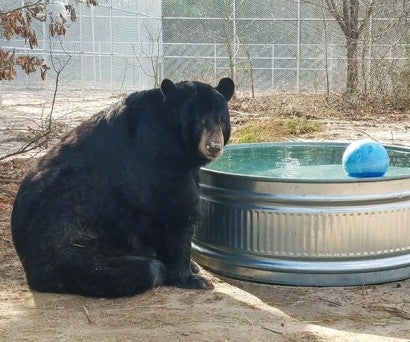 Tibor isn't quite sure what to do with his new wading pool.
Katie Birk
/
The HSUS

It’s understandable. After arriving at the ranch in January, Sammi and Tibor were still in hibernation mode, preferring to snooze and conserve energy rather than explore. Once the weather warms up, they’ll have a little more pep. They should also feel better overall; one of the main benefits of their new life at the ranch is “top-notch veterinary care,” Birk says. That care includes pain medications and joint supplements to treat their arthritis.

Getting more exercise and shedding a few winter pounds should also ease the pair’s joint pain. At the ranch, the bears have plenty of opportunities to stretch both their limbs and their minds. Along with pools, perches and platforms for climbing, they’ll get enrichment toys to engage their curiosity. “A lot of the toys involve kind of a beehive scenario,” says Birk, “like a ball that has a hole in it and they have to bat it around to get a treat out of it.” Birk and her team have already discovered one of the bears’ favorite treats: cherries. In the years ahead, Sammi and Tibor will get plenty of these snacks as they settle in to their new lives. They deserve it.