Into the urban wilds

This summer, help family and friends find nature wherever you go
BY Nancy Lawson
Share

Atiya Wells was 22 when a walk in a park changed her view of the world.

Growing up, she thought of natural areas as places for family cookouts, “not really seeing the forest for the trees,” she says. But on a date with her then-boyfriend-now-husband, Kieron, she ventured beyond the picnic areas of a state park, where an overlook revealed an expansive valley cradling a city rendered insignificant by Shenandoah Mountain rising beyond. Stressed out from the daily grind of nursing school, Wells suddenly felt relaxed. “I was like, ‘Oh my gosh, look at what I’ve been missing my entire life!’ ”

That first foray into the woods would lead Wells down many more paths—through meadows, forests and unused city lots harboring unexpected treasures. It would set her on a mission to bring others along, particularly children of color, so they could also get to know and love the plants and animals in her Baltimore community. Now a trained naturalist, she helps transform the outlooks of participants in her nature walks—from the 4-year-old who gleefully reported her discoveries in a sidewalk planting strip (“We looked under three rocks and found three worms and one ant! Can you believe it?”) to the adults who are no longer afraid of the woods (“Oh my gosh, I can’t wait for your next walk!”).

A full-time nurse with a 2-year-old son and 6-year-old daughter, Wells leads a nature center program that helps schools and day care providers engage children outdoors. But while attending naturalist classes to further her own education, she saw a need to help adults in her community, too. “I started noticing—I’m the only black person in this class,” she says. Originally from northern New Jersey, Wells didn’t understand the imbalance. She began studying Maryland history and learned that the lasting effects of slavery and racism included lingering perceptions of the outdoors as dangerous.

Many adults attending her nature walks this spring had never been to the local park, so Wells proceeded slowly. She reassured the group that their time under the canopy would be short and that it’s easier to see long distances before tree leaves emerge. The walks provided a safe space for learning. Many environmental groups wonder why they can’t attract more diverse crowds to their events, says Wells, but “you have to meet people where they are. You cannot take people so far outside their comfort zone.”

Fortunately, many plants and animals are happy enough to meet people anywhere; some thrive in urban spaces. But no matter where we live—even in areas with more obvious biodiversity—other cultural pressures obscure appreciation of nature. “The average 10-year-old knows about 300 commercial brands,” say filmmaker Susan Todd, “but only on average 10 of the native plants and animals in their own backyard.” Through the Imax movie they co-produced, she and husband Andrew Young hope to shrink that gap. Filmed around their home in suburban New York, Backyard Wilderness showcases wood ducklings dropping from trees en route to a pond, lush ferns unfurling, raccoons nesting in tree cavities and salamanders breeding—spectacular events largely ignored by human residents. The scenes are a world apart from Wells’ Baltimore neighborhood, yet much of the message is the same as hers: Life is everywhere, but we don’t take the time to look, and our children’s existence is the poorer for it.

Wherever you live, try these ideas for encouraging appreciation of nature by giving the gift of time among wild neighbors.

Young kids usually get tired out by hikes, so set up a “playgroup in the woods” instead, recommends Joanna Salidis of Afton, Virginia. In the process of building forts and wading, her sons got to know every inch of a local park—“what lived where, what the different trees dropped, what was in the water, how it changed in the seasons, how drenching rains filled the gullies, where the edible fruit grew and when to pick it, how cold it had to be to get thick ice on the pond.”

When Wells launched a similar effort three years ago by starting the Baltimore chapter of Free Forest School, the unstructured playtime improved her parenting style and the behavior of her daughter, Kori. “She became more balanced. She became more confident in her ability to do things, she became more independent in her play.”

Previously, Wells and her husband had been so focused on hiking to the next mile marker they weren’t connecting with their surroundings. Kori helped them reset. “She’d be like, ‘Ooh, a stick!’ ‘Ooh, another stick!’ ‘Oh my gosh, look at this leaf!’ But that’s what kids need.” 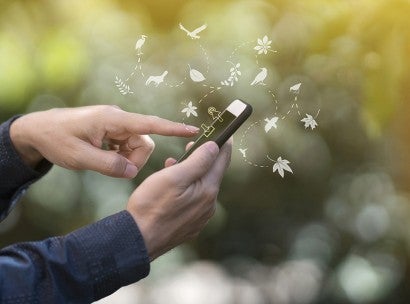 If you don’t know the name of a plant or animal you encounter, find out together using identification apps such as Merlin, Seek and iBird.
Ozgurdonmaz
/
iStock.com

Don’t fret if you don’t know

You don’t have to be an expert; asking questions together is part of the fun: Which tree did that acorn come from? What animal ate those berries? What’s inside that fruit? “To me, not knowing—I feel like that also brings the awe and wonder that I want to model anyway,” says Wells. “If I don’t know the name of something, we can find that out together.”

Naming other living beings fosters appreciation. To that end, Todd and Young worked with their partners to develop Seek, a version of the popular iNaturalist crowd-sourcing app that helps young explorers identify plants and animals. Bird-identifying apps Merlin and iBird are favorites of Ezra Staengl, Salidis’ older son. An accomplished naturalist at 15, he says the quick feedback on bird IDs helps sustain kids’ interest. “Whatever we can do to make nature more accessible to someone that hasn’t experienced its beauty before is a step in the right direction,” he adds.

At 6, Kori is already an herbalist in the making, recently volunteering to co-lead a nature walk with Wells. “She said, ‘Can I teach about plantain now?’ ” says Wells. “So I gave her the floor.” Kori makes plantain salves for her boo-boos and adds chickweed to sandwiches. She helps Wells in the garden by pulling invasive star of Bethlehem bulbs and pretending they’re onions for her “cooking.” Together Wells and her daughter read the Herb Fairies children’s books and have made dandelion fritters that Kori favorably compares to chicken nuggets.

When they first began walking, Wells acquired an old camera through the “Buy-Nothing Baltimore” Facebook page so Kori could photograph branches, twigs, flowers and anything else she liked. Alongside her daughter, Wells—who jokes that she once thought all birds were pigeons—has learned to see not just the forest for the trees but the trees for the branches, too. She recognizes the shapes of oaks, the browse lines indicating deer nibbling, the moisture-loving sycamores revealing the presence of water. It’s her passion to help others see what they’ve been missing, and to show them that natural wonders aren’t confined to far-flung destinations: “You really can appreciate nature anywhere.”