Some members of Congress want to return to the era of mass killing
BY Karen E. Lange
Share

They were supposed to be adopted.

That’s what the Bureau of Land Management promised when it continued rounding up wild horses and burros in recent years, even as adoption rates tumbled and advocates pleaded for the federal agency to use contraception to reduce the number of equines on the range.

Now, instead of finding new homes, about 45,000 wild horses and burros in dusty holding pens across the West could be the first to die.

In July, a House committee voted to permit the BLM to shoot or lethally inject as many as 90,000 “excess” wild horses and burros. The first to go would be those 45,000. Next would be 46,000 horses and burros still on the range—enough to reduce the number there to less than 27,000.

In 1971, Congress passed the Wild Free-Roaming Horses and Burros Act, ending the practice of rounding up equines on America’s ranges and killing them for meat. But today, some members of Congress want to return to the era of mass killing.

They’ve also targeted domestic horses. Since the U.S. stopped slaughtering horses for human consumption 10 years ago, a dwindling number of horses are trucked to plants in Canada and Mexico to be killed for meat. In July, the House Appropriations Committee approved budget language that would make it legal once more to slaughter horses in the U.S. For now, a Senate committee vote appears to have blocked this measure.

Polls show the majority of Americans do not favor killing horses, wild or domestic. But lobbyists for the cattle industry and hunting groups do, because horses compete with livestock and game species such as antelope for pasture and water. The Trump Administration’s 2018 budget included a proposal that opens the door for the BLM to save money by selling wild horses for slaughter. The congressional budget proposal would instead allow the BLM to cull young, healthy wild horses. Representatives say the horses would be “euthanized,” the way homeless pets sometimes are.

Here are the myths some politicians, ranchers and hunters are trying to use to justify allowing slaughter plants to reopen and the BLM to kill wild horses and burros. The reality is there are better, more humane alternatives to handle unwanted domestic horses and the growing number of wild horses and burros on the range.

MYTH: Horses can be slaughtered in a humane manner.

Reality: Horses’ instinctive flight behavior and their long necks make it difficult to accurately place the captive bolt gun on their foreheads to bring a quick death. This means they are often not killed on the first try as are cows and other livestock. Especially if the slaughter plants’ workers are inexperienced or the guns are not well maintained, it often takes several attempts, as terrified horses struggle to survive.

MYTH: Slaughter is the best and only way to deal with unwanted domestic horses.

Reality: There are more humane ways to reduce the number of unwanted horses, such as adoption. “We need to find them homes [so that] they have second careers,” says Marty Irby, HSUS senior advisor in charge of the equine department. “It’s very feasible, and it’s being done.” Educating horse breeders so they prevent mares from having too many foals is another way to reduce the number of unwanted domestic horses. Slaughter plants allow those who overbreed to dispose of animals cheaply. The Safeguard American Food Exports (SAFE) Act, now before Congress, would have the opposite effect, by banning both the slaughter of horses in the U.S. and the export of horses for slaughter. Putting animal welfare concerns aside, horses in the United States are not raised for human consumption and their meat contains toxic residues of veterinary drugs. 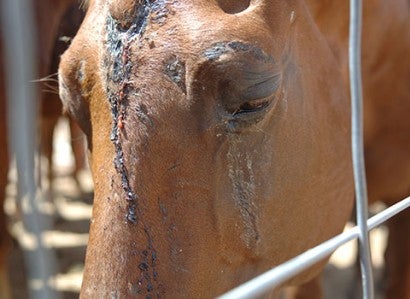 MYTH: Killing wild horses is the best and only way to keep their numbers down.

Reality: There is a humane alternative that does not require killing—immunocontraception. This is the solution the National Academy of Sciences favored in a 2013 report. Recent data shows the contraceptives PZP and GonaCon stop reproduction in wild horses (see p. 12). They could be delivered to horses in remote areas. Against the advice of The HSUS and other advocacy groups, the BLM continued to remove horses from the range for adoption even as adoption rates fell by three quarters—from around 8,000 in the mid-1990s to in 2005 to around 2,000 since 2012. The agency has delayed using wide-scale contraception to halt population growth on the range. These policies created the problem of 45,000 horses in holding facilities.

MYTH: It is cruel to oppose killing wild horses because the animals are starving on the range.

Reality: There is no evidence to support this. The most cull supporters have been able to muster are anecdotes and a single photograph of two skinny wild horses in Nevada. In the wild, sometimes individual animals are sick and weak. Herds can suffer in times of drought. But wild horses as a whole are not dying of hunger.

Galen Clarke
/
For The HSUS

MYTH: Wild horses and burros are causing large-scale damage to the range. Their numbers must be kept below 27,000.

Reality: There are only 72,000 wild horses and burros on 32 million acres of public land. There are millions of cows on 155 million acres of public land. The BLM figure of “less than 27,000” is based on political considerations as much as science. “Horses are the scapegoat” for rangeland damage, but there are few, if any, studies that show which damage is caused by livestock and which by horses, says Gillian Lyons, HSUS senior wildlife fertility control policy manager.

MYTH: Killing wild horses will save the government money and solve the problem.

Reality: Rounding up and culling “surplus” wild horses and burros from the range will increase the food and water available for the remaining animals, causing the number of foals born on the range to soar. This has already happened, increasing the population growth up to 20 percent a year. Once they have started, costly culls will have to be completed again and again, with the expense of helicopters and trucks each time. The public is unlikely to accept repeated mass kills of wild horses, something the BLM has long recognized. Last year, when an advisory board recommended culling, the agency quickly stated, “The BLM does not and will not euthanize healthy animals.”

MYTH: The BLM may not actually kill any wild horses. They just want the option to do so, as another “tool in their toolbox.”

Reality: The BLM, if given permission to cull wild horses, very likely will, says Lyons: “I think they are very serious about using this tool—I don’t see them using any other. They want to be able to remove wild horses and kill them.”