Is your pet trying to tell you something?

These unusual behaviors might mean your pet is due for the vet
BY Bethany W. Adams
Illustrations by Rachel Stern
Share

What if I told you that I, a Type-A dog lover who works with animal experts on a daily basis, didn’t realize that my two rescue dogs, Jules and Jelly, respectively had an ear infection and a gum infection at the same time?

If you’re thinking, “That would never happen to me!” it’s nothing I wouldn’t have previously thought myself. But because our pets can’t talk, there’s always a chance you’ll miss something—no matter how much you care and no matter how often you Google, “Why does my pet [insert weird behavior here]?”

Our veterinarian picked up on Jules’ ear infection at his yearly wellness check, but prior to that visit, I had done nothing except affectionately tease him: “Does your earwax taste good today, Jules?”

Jelly was the guilt-inducing kicker. Considering the expense of professional teeth cleaning, my husband and I reasoned Jules needed a cleaning sooner because he’s probably a little older. But when it was Jelly’s turn to go under the tooth scaler, an X-ray revealed that he had broken teeth embedded in his gums. Never mind that Jelly has a murky medical past, and that with the naked eye, he appears to have few teeth to clean: The pet parent guilt was very real.

If they’re scratching, if they’re shaking their head, they need to be seen.

Determined not to miss other signs that my pets might be suffering—and to prevent other pet parents from doing the same—I chatted with Humane Society Veterinary Medical Association veterinarian Melissa Shapiro about these and other common ailments. If your dog or cat is exhibiting one of these quirky symptoms, consider taking him to a veterinarian ASAP.

Sorry, cat owners: If your once-standoffish cat suddenly won’t leave your side, it’s not (necessarily) because she finally appreciates everything you do for her. “Older cats with hyperthyroidism become very affectionate and very vocal,” says Shapiro, adding that they’ll probably also drink a lot and pee a lot (check for an extra-wet litter box or accidents in the house). In both dogs and cats, increased water intake and urination frequency could also indicate a urinary tract infection, kidney problems or even diabetes.

“If they’re scratching, if they’re shaking their head, they need to be seen,” says Shapiro, citing ear mites, allergies that lead to yeast infections, bacterial infections, or even a tumor or foreign body stuck in the ear.

Despite the legions of minty-fresh treats advertised to pet owners, it’s not normal for a dog or cat to have (very) bad breath. He might have cracked or infected teeth‚ or even a piece of a treat or a stick stuck in his hard palate.

If I took my pets to the vet every time one of them “hurked” on the rug, I’d be there on a weekly basis—but prolonged diarrhea or vomiting, especially if coupled with a bloated belly or blood, can be serious and cause your pet to deteriorate rapidly, says Shapiro. If your dog has thrown up several times or has additional symptoms, a quick call to your veterinarian is warranted, especially if you’re about to leave the house for an eight-hour workday or other extended period. 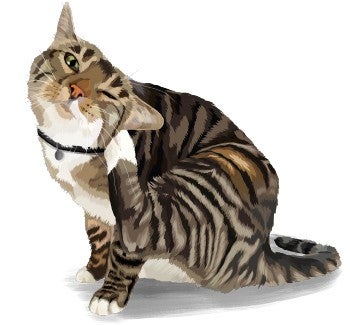 If you’re leery of the potential veterinary costs, Shapiro notes that veterinarians are often willing to help clients choose among treatment protocols that range from simple and budget-friendly to more involved and expensive. Plus, the blow to your wallet might not be as bad as you imagine: A fecal or urine analysis typically costs around $35, and eardrops usually cost less than $30.

“Maintaining a good ongoing relationship with a veterinarian is the best way to keep pets healthy and happy,” says Shapiro. “Many times, we’re able to detect underlying, slowly progressive illnesses that, when diagnosed and treated early on, have a better long-term outcome and tend to cost less to treat.”