Julie Busch Branaman
/
For the HSUS

Scientists have just begun to scratch the surface when it comes to understanding bird brains. But studies have shown what backyard chicken caregivers already know: The world’s most most intensively farmed animal has remarkable cognitive abilities.

Chickens will trip over themselves running to greet their caregivers, and there's individual recognition within the flock, too. As they grow into adulthood, chicks continue to look to their mothers for guidance. And, of course, there’s the real-life pecking order.

Roosters will also vocalize while picking up and dropping food to alert hens that they’ve found something good to eat, thus elevating their status among the flock. If the males are going to build credit, the hens must remember who did what and how often. Sometimes lower-status roosters will pretend they’ve found food to build credit with a hen over time. Of course, they must be far enough away from the hens that they don’t catch on to the phantom food.

Chickens talk to each other.

Even before hatching, chicks are talking to their mother. Stress peeps tell her they're cold, prompting her to turn or move the egg in the nest. A purring-like sound lets her know they're comfortable. By the time they hatch, they know mom’s voice. Chickens also use different alarm calls to warn each other of aerial and land-based predators.

When mom sends out her food call, her chicks respond by pecking at the ground. In one study, hens learned that red-colored food was good while their chicks were given blue-colored food. When the hens saw their chicks eating the wrong color, they began scratching, pecking and vocalizing to convey the perceived error. Chicks also learn alarm calls from mom, an important lesson as they stray farther from her side. Her chicks know the call and come running.

Hens show frustration by pacing back and forth and by voicing longer calls punctuated by staccato-like sounds—a common behavior in factory farms, especially when nesting behavior is thwarted.

One day a week can make a world of difference for your health, animals and the environment! Start by trying a new vegetable-packed dish or swap your usual entrée with a plant-based meat alternative.

Take the Pledge
Sylvia Elzafon / For The HSUS

Chickens can solve complex problems and have a keen sense of time.

Chickens fed at the same time each day know when their caregiver is “late” and will make a racket to voice their displeasure; backyard chickens moved from pasture to run at the same time each day will wait at the gate at the correct time. After being taught to wait six minutes for food, study groups of chickens consistently ate at the elapsed time. And free-roaming chickens will unfailingly return to their coop or perch at dusk.

In one test, 5-day-old chicks showed off their ability to identify a target based on its numerical place in a series of 10. The young birds were presented with a row of identical holes, one of which contained food. When the apparatus was rotated, they were still able to return to the designated hole. In one clicker-training program, chickens were taught to consistently peck at one of four unique geometric shapes—even as the order of shapes changed. When the target shape was removed, they waited to peck.

In two other studies, chicks avoided pecking a bitter-tasting substance after observing the responses of other chicks and untrained hens pecked at colored keys for food after observing a trained hen do the same.

Chickens and their eggs come in all shapes, colors and sizes.

Chickens have been bred for both ornamental and food purposes for hundreds of years, with various global poultry organizations recognizing anywhere from 53 to 93 breeds. From large Ameraucanas with beard-like facial feathers and blue eggs to fluffy Silkies with tiny eggs and Polish chickens with feathered top hats, many people keep chickens simply to enjoy watching them sunbathe, scratch and play.

Unfortunately, unprincipled breeders have also selectively bred today’s egg-laying hens to lay around 300 eggs a year, far exceeding the egg production of hens a century ago, who laid around 100 eggs a year, and wild chickens, who lay around 12. The high-volume laying means hens often develop reproductive cancers or egg yolk peritonitis (the wearing out of the reproductive tract). They’ve bred today’s broiler (meat) chickens for rapid weight gain and muscle mass to such an extreme that they are inherently prone to painful, debilitating leg problems and have difficulty even walking.

Chickens have been used and abused by humans and they deserve better. 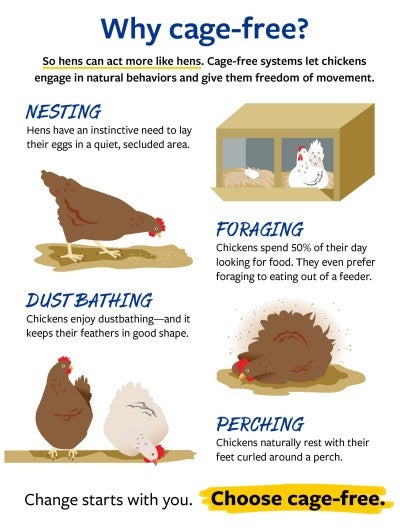 Most of the billions of farmed chickens are unable to practice the natural behaviors that make their lives worth living. Typical operations confine thousands of chickens to cruelly small or crowded indoor spaces and caged egg-laying hens are prevented from being able to take dust baths, lay their eggs in nests or even spread their wings. Bred to be hungry and in constant search for food, commercial broiler chickens can do little more during their brief lives than sit in front of their feeder and eat. When they reach market weight at about 6 weeks old, they are sent to slaughter, still peeping like baby chicks.

You can reduce this suffering by consuming animal products with care, such as by choosing pasture-raised eggs, and signing the Meatless Monday pledge. Companies like Gardein, Morningstar and others make delicious plant-based “eggs” and “chicken” that are packed with protein—and none of the cruelty.