Greyhounds are at a disadvantage even before they are born. Thousands are bred annually (many more than are needed to race) in an attempt to create the fastest dogs. Cruel methods are often used to dispose of unwanted dogs and the dogs who do survive in the industry are forced to live in cramped crates, pens or fenced enclosures. Many racing dogs suffer injuries while racing; according to state records, a racing greyhound dies every three days on a Florida track. These social creatures are also forced to spend most of their time alone, confined to cages for 20-23 hours a day and denied the opportunity to walk or play.

With only a few tracks remaining, thousands of retired greyhounds will be in search of loving families to support their transition from the track to the couch.

What is wrong with greyhound racing?

Greyhound racing is cruel and inhumane and there is no place for it in the modern era. When it first emerged in the United States in the early 20th century, supporters did not know that hundreds of thousands of dogs would suffer and die.

Since then, our society has evolved and dog racing is out of sync with society’s values toward animals. Today, this kind of wasteful and needless suffering is rejected as a form of gambling or entertainment. According to government records now available, common racing injuries include broken necks and broken backs, dislocations, torn muscles and paralysis. Electrocutions have also occurred when dogs make contact with a track’s high voltage lure. Some dogs die on the racetrack while others are put down due to the severity of their injuries or simply because of their diminished value as racers

Racing greyhounds endure lives of confinement, are subject to standard practices that are cruel and suffer injuries and even death. Greyhounds used for racing are kept in cages, barely large enough for them to stand up or turn around, for up to 23 hours per day. Shredded paper or carpet remnants are used as bedding. 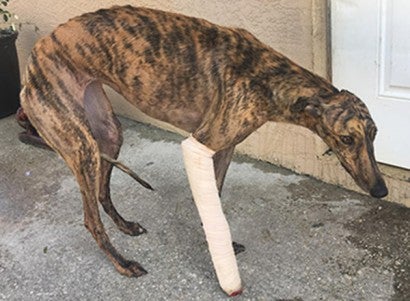 From 2008 through 2018, more than 15,000 greyhound injuries have been documented nationwide. This is a notable underestimate since injuries do not have to be reported in either Alabama or Florida.

Yes. Historically as many as 10,000 greyhounds have been bred annually. The racing industry exacerbates an overproduction of dogs, which simply displaces other homeless animals and diverts resources needed to address other animal welfare challenges.

How does the American public feel about greyhound racing?

Increased public awareness that dog racing is cruel and inhumane, in addition to competition from other forms of gambling, has led to the nationwide decline of greyhound racing.

Increasingly, citizens around the country are mobilizing in opposition to greyhound racing and lawmakers are responding. In November 2018, the citizens of Florida voted to phase out greyhound racing by an overwhelming majority—nearly 70%. In 2017, Arizona Governor Doug Ducey signed legislation to prohibit dog racing in his state, declaring that “greyhound racing has run its course in Arizona. It’s heartening that these beautiful greyhounds will soon be off the track and into loving homes.” Other states that have passed legislation prohibiting dog racing over the last decade include Massachusetts (2010), Rhode Island (2010), New Hampshire (2010) and Colorado (2014). South Dakota allowed its authorization for live dog racing to expire in December 2011.

Yes. Thousands of dogs in this industry are kept in kennel compounds. These compounds are comprised of long narrow buildings with “turn-out” pens: Fenced-in dirt runs where dogs are “turned out” and allowed to relieve themselves. In these compounds, dogs are kept in warehouse-style kennels in rows of stacked metal cages. According to Florida state records, dog track cages measure 36 inches by 36 inches by 42 inches. Shredded paper or carpet remnants are used as bedding. According to a 2006 state investigative report, racing greyhounds are “normally confined” for “20 to 23 hours per day.” 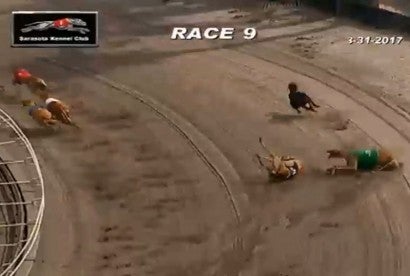 Are dogs injured in greyhound racing?

Yes. At dog tracks nationwide, greyhounds routinely suffer serious injuries. From January 2008 through April 2018, a total of 15,273 greyhound injuries have been documented. The most commonly reported injury was a broken leg. Other injuries included head trauma, electrocution and broken backs.

At two West Virginia dog tracks, 8,159 greyhound injuries were reported between January 2008 and March 2018, including at least 398 dogs that died or were euthanized.

At Southland Greyhound Park in Arkansas, 1,148 greyhound injuries were reported between January 2008 and April 2018, including at least 35 dogs that died or were euthanized.

At Iowa Greyhound Park, 416 greyhound injuries were reported between January 2008 and October 2017, including at least 29 dogs that died or were euthanized.

Are there other welfare concerns with greyhound racing?

Yes. Since 2008, over thirty cases of greyhound cruelty and neglect have been documented in the United States. These cases occurred in all six states with active dog tracks, as well as in former racing states. These cases include physical abuse, parasitic infestations, starvation and failing to provide veterinary care.

Is the greyhound industry in decline?

Yes. Commercial greyhound racing is now illegal in more than 40 states, including Florida as of January 1, 2021. Between 2001 and 2014, the total amount gambled on greyhound racing nationwide declined by 70%. This includes gambling on live dog racing and simulcast gambling, where bettors wager remotely on races that take place elsewhere.

Between 2001 and 2014, state dog race revenue declined by more than 82%, and by the end of this period represented only $13 million nationwide. When regulatory costs are taken into consideration, it is likely that states are losing money on greyhound racing

Yes. Over the past decade, there have been 438 greyhound drug positives at Florida tracks, including 73 greyhound cocaine positives. Other drug positives include novocaine, lidocaine, industrial solvent DMSO, and opiates oxycodone and oxymorphone. Greyhound breeders claim cocaine positives are from environmental contamination, a ridiculous theory that has never been proven in a single case. The state agrees this scenario is unlikely: “The Division finds it is much more likely that a prohibited substance is provided to a racing animal purposely by the animal’s trainer.”

Are greyhounds used in racing given anabolic steroids?

Yes. Female greyhounds are routinely given an anabolic steroid to prevent a loss of race days. In 2017 legislative testimony, the Florida Greyhound Association estimated that 50 percent of female dogs are given this drug. This practice is outlawed in greyhound racing in Great Britain, Australia and New Zealand, due to integrity and animal welfare concerns. Industry handbook Care of the Racing and Retired Greyhound states that anabolic steroid use can result in serious harmful side effects including increased aggression and virilization. According to the Merck Veterinary Manual, “Long-term suppression of estrus by using androgens is not advised, because it is not documented to be safe in breeding bitches ... the safety and efficacy of injectable testosterone, as practiced commonly in racing greyhounds, has not been supported by controlled studies and is not advised.”

What are racing greyhounds fed?

To reduce costs, greyhounds are fed raw meat from dead, dying, diseased or disabled animals (called “4-D meat”) that has been deemed unfit for human consumption. Denatured charcoal is added to 4-D meat to prevent human use. The industry uses this substandard meat to cut costs. According to an industry handbook, this meat is used because “it is the most economically feasible for the greyhound industry at this time.” Greyhounds are particularly at risk of becoming ill from pathogens such as salmonella and E-coli, because they are fed raw 4-D meat. Greyhound trainers refuse to cook the meat because they believe it would cause dogs to be less competitive.

Is disease transmission a concern with greyhound racing?

Yes. The very structure of the dog racing industry enables the spread of contagious diseases. Because hundreds of dogs live at racetracks in warehouse-style kennels, when one dog becomes ill, many more are exposed. The confinement of dogs in small spaces, the high density of dogs at tracks and the transportation of dogs across state lines for racing all allow diseases to be spread faster and further than they otherwise would. It is the perfect storm for the transmission of disease—stressed, poorly socialized animals moved around in a nationwide circuit to advance the profits of the industry. When illnesses strike, quarantines are imposed at the will of track owners, who have strong financial incentives to keep the dogs racing.

Does greyhound racing help the economy?

No. Greyhound racing is on the wane and not sustainable. Currently, 41 states outlaw commercial greyhound racing and in community after community, dog racing has been replaced by more modern forms of entertainment.

Since 2001, more than 30 dog tracks have closed around the country and dog racing now represents less than one percent of all wagers placed each year in the United States. There are only 17 dog tracks remaining in the U.S. today, 11 of which are located in Florida until they are forced to close by December 31, 2020.

Why would greyhound trainers treat the dogs they rely upon in an inhumane way?

This is a profit-driven industry and those involved are always looking for ways to cut costs and maximize profits. Dogs are only valued if they earn money for their owners. If they stop making money, it is economically expedient to discard the poorly performing dogs and breed new ones, perpetuating the never-ending cycle of cruelty.

Don’t people in the industry love their dogs?

People who love dogs treat them like they are part of the family, not like profit machines. This industry is not built on love, it is built on profiting from the exploitation of dogs. 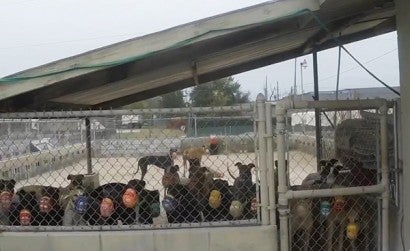 Don’t the dogs get recreational time each day?

States with active tracks have minimal regulations regarding dog racing, but these regulations do not prevent thousands of dogs from enduring lives of confinement, nor do they prevent hundreds of dogs from being seriously injured.

Greyhound racing is largely self-regulated and that is no substitute for a public policy that prevents dogs from being treated cruelly for profit. The controls that do exist came at the insistence of humane organizations. Now the humane community is united in its view that this languishing industry must stop its mistreatment of dogs.

What was Florida’s Amendment 13?

Amendment 13, backed by the Humane Society of the United States, Grey2K USA Worldwide, the Doris Day Animal League and other organizations, and overwhelmingly supported by Florida voters in 2018, included a 26-month phase-out period to close the 11 dog racing tracks in operation in the state. As of January 1, 2021, dog racing is illegal in Florida.

Approximately 4,000 dogs were adopted into loving homes as a result and we provided grants to a number of shelter and rescue organizations that were critical in treating the dogs for a variety of medical issues prior to finding them permanent adoptive homes.