A profile of the patron saint of animals and ecology
Share

St. Francis of Assisi, patron saint of animals and environment could be viewed as the original Earth Day advocate. Francis' devotion to God was expressed through his love for all of God's creation. St. Francis cared for the poor and sick, he preached sermons to animals and praised all creatures as brothers and sisters under God.

St. Francis of Assisi, patron saint of animals and ecology, was born in Italy around 1181-1182.

After a wild youth and a brief career as a soldier, Francis had a conversion experience that inspired him to renounce his family’s wealth and devote his life to God. His dedication to poverty, humility, obedience, patience and compassion soon attracted followers and, in 1209, he received permission from Pope Innocent III to form a new religious order known as the Friars Minor (commonly called the Franciscans). 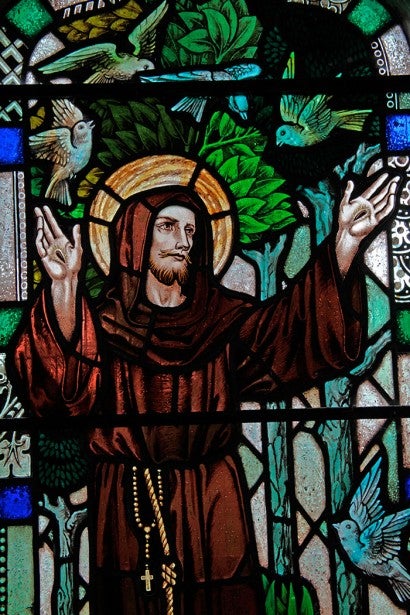 Francis' deep love of God overflowed into love for all God's creatures—expressed not only in his tender care of lepers and his (unsuccessful) attempt to negotiate peace between Muslims and Christians during the fifth Crusade, but also in his prayers of thanksgiving for creation, his sermons preached to animals and his insistence that all creatures are brothers and sisters under God.

In 1224, Francis became the first saint in history to receive the stigmata (the wounds of Christ crucified). On October 4, 1226, Francis died in the town of Assisi and was quickly canonized by Pope Gregory IX. Today, over three million people a year make a pilgrimage to the tomb of St. Francis, revealing him to be one of the most popular and beloved saints of all time.

In 1979, Pope John Paul II paid tribute to Francis' love for creation by declaring him the patron saint of ecologists.

In a subsequent speech, the Pope encouraged Catholics to follow the example of Saint Francis by embracing all creatures as members of a single family and by offering respect, dignity and care to each family member.

"I should like to address directly my brothers and sisters in the Catholic Church, in order to remind them of their serious obligation to care for all of creation. The commitment of believers to a healthy environment for everyone stems directly from their belief in God the Creator, from their recognition of the effects of original and personal sin and from the certainty of having been redeemed by Christ. Respect for life and for the dignity of the human person extends also to the rest of creation, which is called to join man in praising God (cf. Ps 148:96).

"In 1979, I proclaimed Saint Francis of Assisi as the heavenly Patron of those who promote ecology (cf. Apostolic Letter Inter Sanctos: AAS 71 [1979], 1509f.). He offers Christians an example of genuine and deep respect for the integrity of creation. As a friend of the poor who was loved by God's creatures, Saint Francis invited all of creation—animals, plants, natural forces, even Brother Sun and Sister Moon—to give honour and praise to the Lord. The poor man of Assisi gives us striking witness that when we are at peace with God we are better able to devote ourselves to building up that peace with all creation which is inseparable from peace among all peoples.

“It is my hope that the inspiration of Saint Francis will help us to keep ever alive a sense of ‘fraternity’ with all those good and beautiful things which Almighty God has created. And may he remind us of our serious obligation to respect and watch over them with care, in light of that greater and higher fraternity that exists within the human family.”

Painting of St. Francis with the Animals, a collaboration with Willem van Herp and Gilliam van Herp.
Wikimedia Commons

Stories about St. Francis and animals

The earliest books about Saint Francis were written by Thomas of Celano, a member of Francis' religious order who knew the saint personally. Thomas' books reveal Francis' love for animals and his conviction that religious faith and care for God's creatures go hand-in-hand.

Preaching to the birds

"One time as [Francis] was passing through the Spoleto valley, he came upon a place near Bevagna, in which a great multitude of birds of various kinds had assembled. When the holy one of God saw them, because of the outstanding love of the Creator with which he loved all creatures, he ran swiftly to the place. He greeted them in his usual way, as if they shared in reason. As the birds did not take flight, he went to them, going to and fro among them, touching their heads and bodies with his tunic.

"Meanwhile his joy and wonder increased as he carefully admonished them to listen to the Word of God: 'My brother birds, you should greatly praise your Creator and love Him always. He clothed you with feathers and gave you wings for flying. Among all His creatures, He made you free and gave you the purity of the air. You neither sow nor reap, He nevertheless governs you without your least care.'

"At these words, the birds gestured a great deal, in their own way. They stretched their necks, spread their wings, opened their beaks and looked at him. They did not leave the place until, having made the sign of the cross, he blessed them and gave them permission. On returning to the brothers he began to accuse himself of negligence because he had not preached to the birds before. From that day on, he carefully exhorted birds and beasts and even insensible creatures to praise and love the Creator."

Read more of Thomas of Celano's stories [PDF] about St. Francis and animals.

The Canticle of the Creatures

Although Francis left behind relatively few written documents, his Canticle of the Creatures (also known as The Canticle of Brother Sun) is included within the Catholic Catechism[1] and was considered by Pope John Paul II to be a beautiful reminder that everything from God bears significance[2].

The Feast of St. Francis and the Blessing of the Animals

Every year on or around October 4, Christians throughout the world celebrate the Feast of St. Francis with prayers for creation and a blessing of the animals. Services in the United States currently occur in 47 states and the District of Columbia. [3]

"Blessings of the animals/pets entered the mainstream U.S. cultural scene in the latter part of the twentieth century. Although blessings of various animals took place in different times and places, and for varying reasons, throughout Christian history, the growth of these rituals beginning in the late twentieth century is dramatic [...] By the early twenty-first century, hundreds, if not thousands, of these blessings take place annually.

"The Cathedral of St. John the Divine in New York City [...] epitomizes the idea and, some might contend, the ideal of the inclusion of animals in the Christian worship setting. The liturgical event is officially titled the 'Feast of St. Francis' and includes the 'Holy Eucharist and Procession of Animals' presided over by the bishop of New York [...]"

"Hopeful participants arrive as early as 7 a.m. to wait for the 11 a.m. worship service to begin because the cathedral fills to at least its 3,500-person, standing-room-only capacity for the Feast of St. Francis ritual. Many bring animal companions with them. On one occasion, Chuckles (the parrot), Philly and Nicholae (dachshunds), and Jack the bulldog stood among humans, ferrets, cats, turtles, and numerous canines, just to name the most prominent species, in a line that spreads several city blocks [...]"

“Following (a) […] prayer the bishop blessed all the animals […] ‘Live without fear: your Creator loves you, made you holy, and has always protected you. Go in peace to follow the good road and may God’s blessing be with you always. Amen.”

Examples of prayers for animals at other blessing services

"Hear our humble prayer, O God,
for our friends the animals, your creatures.
We pray especially for all that are suffering in any way:
for the overworked and underfed,
the hunted, lost, or hungry;
for all in captivity or ill-treated,
and for those that must be put to death.
For those who deal with them,
we ask a gentle heart of compassion,
gentle hands, and kindly words.
Make us all true friends to animals
and worthy followers of our merciful Savior, Jesus Christ.
Amen."

"The animals of God's creation inhabit the skies,the earth and the sea.
They share in the fortunes of human existence
and have a part in human life.
God, who confers gifts on all living things,
has often used the service of animals
or made them reminders of salvation ...
We, therefore, invoke God's blessing on these animals.
As we do so, let us praise the Creator
and thank God for setting us as stewards
over all the creatures of the earth."