As devastating bushfires in late 2019 and early this year reduced Australia’s thriving, vibrant landscape into miles of scorched earth and destruction, rescuers from Humane Society International and HSI/Australia mobilized to help. They rescued injured animals from the smoldering landscape, transported them to local facilities for care and provided watering stations for any unseen survivors.

For every few animals who made it out alive, thousands were dead: An estimated 1 billion animals lost their lives.

While HSI and HSI/Australia continue to assist with long-term recovery, rescuers and others in the field share details from those early heartbreaking days on the ground. 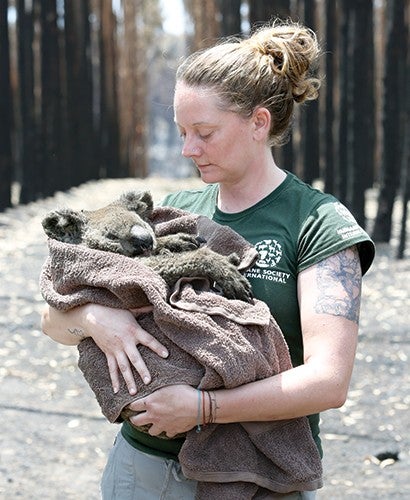 Fire is a natural process for many ecosystems, but these bushfires were unlike anything most responders have ever seen before. Their intensity and scale engulfed nearly 50 million acres, killing 34 people and roughly a billion animals. Our team witnessed this horror firsthand when we deployed to Kangaroo Island after fast-moving bushfires scorched nearly half the island, which is known for its rich wildlife and beautiful landscapes. Now, sadly, we can only see those images in photos.

For me, the images of Kangaroo Island are void of color. Ash-covered floors with row after row of burnt, match-like sticks rising lifeless into the sky—a stark reminder of how the oily eucalyptus trees, normally a lifeline for koalas, became an unstoppable furnace with little chance for animals to escape. The edges of these plantations told stories of terror and desperation: koalas, wallabies and kangaroos fleeing from the flames only to succumb to the unimaginable fury. The number of bodies, severity of their injuries and expressions left on their faces won’t be something I forget any time soon.

However, there were also images of hope. A single live koala, peering down at me from her forked limb high in a tree. Tiny sprouts of moss emerging from the powdery ashen valleys. Kangaroos springing across the charred bush, uninjured and determined to survive.

While the number of animals who did perish is still hard to grasp, it is nothing short of a miracle that so many managed to stay alive long enough for us to reach them. Every animal we were able to rescue from this disaster became a reason to return to the field despite the horrors. We found hope and determination to keep searching. We found joy in the ones who recovered and peace for those laid to rest.

We found hope and determination to keep searching. 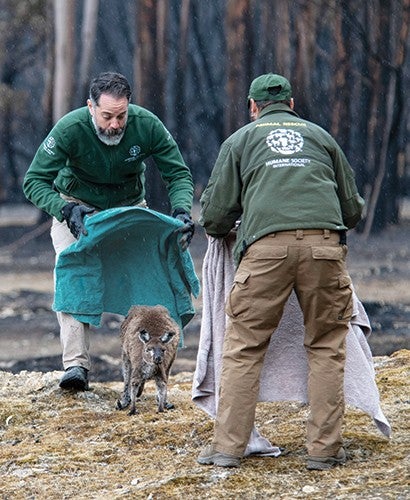 Disaster Responder and Video Producer,
The Humane Society of the United States

During one of the first days on Kangaroo Island, we were at a watering hole on a ravaged eucalyptus plantation. We’d been finding severely dehydrated koalas and injured kangaroos who could barely walk from the burnt, festering wounds on their feet. There was a small kangaroo who was wary of my presence and switched between tiny hops and inching along using her tail to keep weight off her mangled feet. She wouldn’t allow me to get closer than 50 yards. We had to leave her that day, but we found her again a few days later.

She was clearly in worse shape than before and would no doubt slowly suffer until she succumbed to her injuries. She was positioned where fellow rescuers Adam Parascandola and Georgie Dolphin and I could approach from different angles. This was our chance, and we were determined not to leave her again. We crept forward, slowly but steadily closing in on her. While her attention was focused on Adam and Georgie, I was able to come up from behind and wrap her in a towel.

We immediately drove to the triage center an hour away with her cradled in my arms. While struggling at first, she became silent and still, only occasionally twitching from what seemed like a dream. I’m almost sure she felt comfortable and safe enough to fall asleep. I fought the tears welling up, knowing that she likely wouldn’t recover but thankful we could reduce her suffering, that I could give her a moment of peace.

There were many animals we saved who will recover. Most of those will be lost in the memories of the massive devastation we witnessed. While this kangaroo had to be euthanized, she will have a lasting effect on me and will be an ambassador for the lives both lost and saved. She will help me remember all those we were able to comfort in their time of need, and I’m forever grateful for our donors who made all of our effort possible.

Every time we found an animal alive, it felt like a miracle. 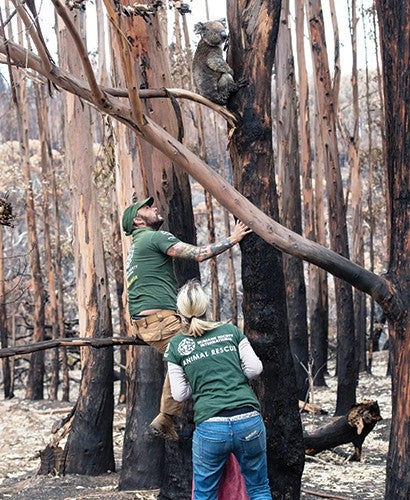 The scenes were nothing short of apocalyptic. You couldn’t walk more than 5 or 10 meters without coming across another body—koalas, kangaroos and even birds.

We ventured into the ash and quickly found a couple of koalas sitting dazed on the lower branches of a tree but not severely injured. Although their fur was singed, they did not have major burns and climbed higher into the trees when we approached. We set up a water station for them and any other survivors in the area.

The smell of charred and decomposing bodies was extremely strong, and we were confronted by the extent of the loss of wildlife. Every time we found an animal alive, it felt like a miracle. An adult koala who still had quite a lot of fight in her, two small joeys wandering about separately, two koalas curled up by a watering hole, a kangaroo joey weakened from burns with no mother in sight, a koala near a melted playground. We transported them all back to the wildlife park for care. Sadly, the kangaroo’s wounds were so terrible that there was nothing left to do but end her suffering. I can’t even imagine her pain.

It was emotionally heavy work, but we completed the search of the island and did all we could to find animal survivors. We felt the support of advocates and donors around the globe, and I think it is safe to say we all took a little piece of Kangaroo Island with us when we left.