Building a foundation of trust

Rescued husky mix comes out of her shell with help from puppies, foster parent
BY Brianna Grant
Share

After being rescued from a New Mexico property, Dorothy gave birth to eight puppies.
Kristen Peek
/
The HSUS

Sixty-two dogs were living on the Las Vegas, New Mexico, property when our Animal Rescue Team arrived in March to assist in rescuing them. They were found outdoors on frozen ground littered with broken glass, wires and other debris.

Kirsten Peek, HSUS media relations manager, was present that day. Although she describes the conditions as “bleak,” that’s not what sticks in her memory most strongly. Instead, she remembers the dogs’ fear: “I have never seen such consistent—across an entire population of animals—palpable fear of humans.”

Peek recalls one dog in particular: a white female who bolted from the team, tail between her legs, so scared that she urinated as she ran. “I’ve seen some pretty horrifying suffering, but for some reason that was just the most haunting thing I’ve ever seen at a cruelty case,” says Peek.

Peek would later sign up to foster one of the rescued dogs, a pregnant white female named Dorothy. She thinks Dorothy could be the very same dog who impacted her so greatly but can’t know for sure—many of the dogs looked similar.

There was this critical moment where she just looked over at me and was like, ‘OK, I’m just going to have to trust you.’

After the rescue, the dogs went to our care and rehabilitation center. Most, including Dorothy, exhibited severe signs of fear, anxiety and stress. Vivienne Miller, behavior and enrichment specialist, remembers Dorothy hunching over, “trying to make herself as small as possible.”

Miller worked to reduce Dorothy’s distress and build positive associations with people through predictable daily routines and enrichment activities. After almost two weeks at the center, Miller saw progress. “She started to give us small tail wags when we would approach her kennel,” Miller says. “She was able to relax and sleep peacefully in our presence and started taking treats from us directly.”

Still, progress was slow. During the first few days at Peek’s home, Dorothy hid under Peek’s bed, coming out to eat, drink and use the potty pads while Peek slept. One night, Peek woke to a pair of ears sticking up over the side of the bed. She was “looking at me and watching me sleep … just kind of scoping me out,” Peek says.

Eventually, Dorothy began spending time in the living room with Peek but ran away if Peek moved. One day, as Dorothy lay close to her, Peek tried touching her. Dorothy jerked away, seemingly unfamiliar with the concept of receiving pets.

Dorothy went into labor after two weeks in Peek’s house. Peek tended to her, offering water and stroking her head. This time Dorothy did not pull back. “There was this critical moment where she just looked over at me and was like, ‘OK, I’m just going to have to trust you,’ ” Peek says. 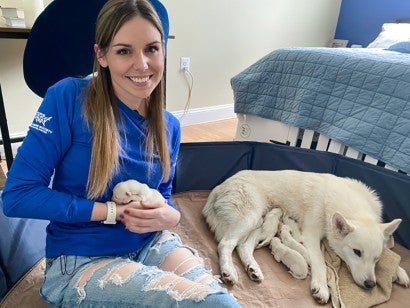 One of the puppies was stuck at an odd angle and Dorothy struggled to deliver him. Peek helped guide the puppy out and cleared his airways before giving him to his mother. Dorothy gave birth to eight puppies (one was stillborn and another died a few weeks later from a heart defect).

“There was never a time after that that she didn’t want to be pet by me,” Peek says. Dorothy even started cuddling in bed with Peek and giving her kisses. The puppies, free of their mother’s trauma, quickly bonded with Peek. She thinks their bold, playful personalities helped Dorothy come out of her shell.

Peek is a seasoned foster parent; more than 100 animals have passed through her home. She’s only adopted one dog—Flea—almost eight years ago. She hopes Dorothy will be her second, once the dogs are cleared to find loving homes through HSUS shelter and rescue partners. With the remarkable progress Dorothy has made, “it’s easy to forget how traumatized she is and what a horrible life she had,” Peek says. She is grateful Dorothy’s puppies will never know a similar pain.