EXPOSED: Undercover investigation at fur farm shows the lives behind the label

Humane Society International undercover investigation reveals the cruel lives and wretched deaths of animals raised in the fur industry. With your help, the HSUS and HSI continue to push for a day no one dies for fashion.
BY Karen E. Lange
Share

Editor's note: In late August, as mink on fur farms in the Netherlands continued to fall sick with SARS-CoV-2, the virus that causes COVID-19 in humans, the Dutch government announced that it would require all mink fur farms to close by March of 2021, nearly three years sooner than required by a previous plan. Earlier in August, the virus was detected on mink farms in the United States, after large numbers of mink on two fur farms in Utah died.

By the end of his life, the arctic fox, just 1 year old, has grown so large he barely fits in the bare wire cage on a farm in Asia. Overbred to produce a big pelt, he suffers from an eye condition made worse by obesity: His lashes grow inward and scratch constantly against his cornea. Like a chicken or a pig on a factory farm, the fox is tightly confined in a long row of cages. As the days pass, barely able to move, unable to dig, instincts frustrated, he moves his head in circles. In the wild, arctic foxes hunt and forage, crossing hundreds of miles, keeping separate territories from foxes in other social groups, burying their food in caches and digging elaborate burrows with multiple entrances and exits so they never lack a way to escape. For the fox on the farm, crammed into a tiny space amongst thousands of others, there is only one way out.

On his final day, foxes all around him are yanked from their cages. He hears them screaming and the sound of metal striking bone. The air smells like blood. A man opens the door of his cage and grabs his neck with a collar attached to a pole, while taking hold of his tail. The fox scrambles to stay in the cage, but he is dragged out and thrown on the ground, where the worker haphazardly beats him around the sides of the head and face with a metal pipe. It is only enough to stun him, not to kill him. A pool of red forms on the ground around his skull as he feebly moves. The worker tosses him onto a pile of other foxes. 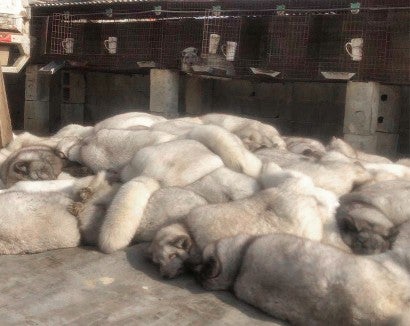 In the last, excruciating minutes of the fox’s life, he is hung head down while a skinner peels his pelt off his body, focused on maintaining the quality of the fur, not on reducing the fox’s suffering. Then his body is discarded to be used as animal feed or sold as cheap meat. Moments pass. From the pile of skinned animals, the fox slowly lifts his head, unmistakably still alive.

All of this was captured in video footage released by Humane Society International in July that showed arctic and silver foxes and raccoon dogs confined in cages, skinned without regard to whether they were conscious and trucked to a vast refuse pile.

A significant number likely regained consciousness within 15 minutes of being beaten around the head and were alive while they were skinned, says Professor Alastair MacMillan, a veterinary consultant who watched the footage at the request of HSI. “The pain would be unimaginable,” MacMillan says, adding that the misery the foxes endured during their lifetimes in cages was in many ways as bad as the suffering they experienced at their deaths.

How do you prevent future pandemics? Ending the fur trade is a good place to start.

The HSI investigation reveals the cruelty behind the fur industry at a crucial moment: As a growing list of designers and retailers go fur-free and the demand for animal fur drops—with fur auction houses experiencing financial troubles—there is mounting evidence that animals on fur farms can carry coronaviruses and transmit them to humans, including the virus that causes COVID-19.

The link between disease and fur farms has never been clearer, says P.J. Smith, HSUS director of fashion policy. "How do you prevent future pandemics? Ending the fur trade is a good place to start."

In 2002 and 2003, the closely related coronavirus SARS was found in raccoon dogs and foxes brought to wildlife markets in southern China. Professor Christian Drosten of the Charite Hospital Institute of Virology in Berlin speculated recently in an interview with The Guardian, a London-based newspaper, that raccoon dogs might have served as the intermediary host through which SARS-CoV-2 reached humans and started the COVID-19 pandemic. “If somebody gave me a few hundred thousand bucks and free access to China to find the source of the virus, I would look in places where raccoon dogs are bred,” Drosten said. 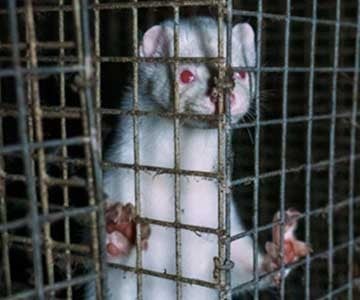 This spring, mink on 17 fur farms in the Netherlands, the world’s fourth largest producer of pelts, tested positive for COVID-19 (mink on farms in Denmark, the world’s second largest producer behind China, also tested positive). Officials said humans gave the mink COVID-19. Then, two members of a family that operates one of the Netherlands farms tested positive, after their animals infected them. The Dutch government ordered all the animals on affected farms killed, fearing that mink would serve as a reservoir for future outbreaks. In June, after HSI and other animal welfare groups urged authorities to shut down all 128 mink farms in the country, the Dutch Parliament voted to close the farms, rather than wait on a previously enacted plan to phase them out by 2024. The Dutch government has committed to consider this proposal and apply to the European Commission for permission to give aid to producers who want to shut down fur farms.

“The Dutch Parliament has said good riddance to an industry predicated on the outdated idea that exploiting, depriving and killing animals for frivolous fur fashion is acceptable,” said Jo Swabe, senior director of public affairs at HSI Europe. “The Dutch government now has to take action.”

In the wild, arctic foxes have been known to travel as far as 96 miles in a single day.
Steven J. Kazlowski
/
Alamy Stock Photo
On fur farms, they have barely enough space to shift position and lapse into a state of “learned helplessness.”
Confidential

HSI is calling on the United Kingdom, which in 2000 banned fur farming, to end the sale of fur in that country, rather than continuing to bring in pelts from farms in Finland, Italy, Poland and China. Wendy Higgins, director of international media for HSI in the U.K., says this enormous double standard has to stop. “As long as we allow fur to be sold in the U.K. we have that blood on our hands.”

Fur farming has been banned or is being phased out in 18 European countries, but no nations have banned the fur trade completely (India and New Zealand have banned imports of fur pelts from certain species, the European Union has banned the import of seal fur from commercial hunts as well as cat and dog fur and California and a handful of U.S. cities have banned fur sales).

HSI, along with the Humane Society of the United States and other members of a coalition of more than 40 groups called the Fur Free Alliance, is calling for more sweeping action: an end to the fur trade, which kills an estimated 100 million animals a year and depends on intensive confinement of wild animals in Asia, Europe and North America. Though the methods of slaughter differ depending on species and country—in Europe foxes and raccoon dogs are killed by anal electrocution—wildlife are kept in similar conditions across the world. HSI released footage last year of a fox and mink farm in Finland that resembles the fur farms its investigators visited in Asia: stressed animals packed in filthy cages. 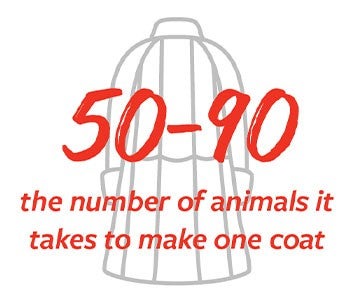 The Humane Society Veterinary Medical Association says fur farms lack the basic requirements for good health, such as abundant sunlight, proper ventilation and distance between individual animals. Beyond the suffering this causes, HSVMA says such farms provide environments in which diseases can spread from one species of wildlife to another and in which viruses can genetically recombine into forms that can infect humans.

A growing number of European countries have banned fur farming, are phasing it out or are enforcing strong animal welfare protections that make fur farming untenable. Still, Europe remains a major fur producer. China is the world’s biggest fur producer and fur importer, manufacturer and exporter of fur products.

In the wake of the COVID-19 pandemic, the Chinese government has closed markets where live wildlife are sold for food and shut down some breeding operations. But it has so far exempted animals used for fur, which represent 75% of the country’s captive wildlife breeding industry, from restrictions on the wildlife trade. Instead, the government has classified mink, arctic and silver foxes and raccoon dogs as “livestock,” meaning they can still be farmed and transported to live markets for sale. In May, HSI sent a letter to the Chinese government asking for a ban on fur farming, noting that fur production has fallen by more than a third in recent years, and asking that the government end the wildlife trade.

On the fur farms in Asia shown in the investigation footage, workers were open about their actions and did not object to being filmed. They viewed their jobs as normal, desensitized to the brutal tasks. “What you’re seeing is the fur industry in the raw,” HSI’s Higgins says. “This is the everyday reality for these animals.”

Likewise, some fur retailers carry on, removed from the terrible cruelty at fur’s source. In stores worldwide, some consumers still shop for fur and fur-ornamented clothing as though it is just another fashion choice. They might wonder whether fur is in style or a good investment. They might be excited by the “luxury.” Or they might overlook the fur entirely if it’s just trim.

But if people understood the suffering fur involves, surely they would turn away. If they heard the screams, smelled the blood. If they watched the drone footage of the refuse pile of skinned foxes—pulling back to reveal hundreds, thousands, until the outlines of individual animals disappear and all that remains is the bloody pink color of their skinless bodies, muscles exposed to the sun. Would they put the coat on, even for a moment? Could they bear its awful weight?

More than 300 designers and retailers have gone fur-free in the last two decades, including influential fashion houses and major stores. Import and sales bans in the United States, Europe and elsewhere are aimed at reducing demand and, eventually, production.

Speak out: Tell retailers that you refuse to wear fur. Sign the Pledge