There’s no single path to a career in animal welfare, so we asked staffers throughout the field to share their journeys and advice
By Bethany W. Adams And Kelly L. Williams
Share

When Rebecca Cary was in second grade, she started an animal club with her friends in the neighborhood. The group hosted a school bake sale to support manatees and visited an animal shelter with their parents. Although Cary doesn’t remember the details of the visit, she does remember thinking that she too wanted to help animals when she grew up. 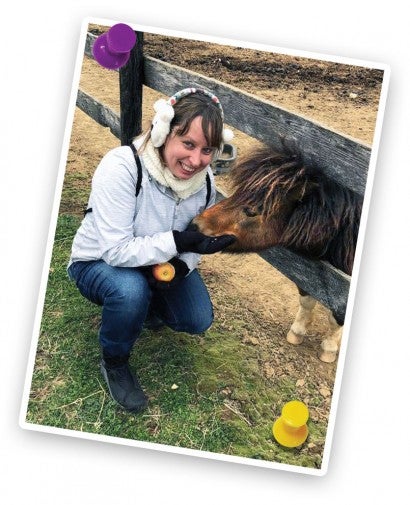 Today, Cary is a senior staff attorney in the Humane Society of the United States’ Animal Protection Litigation department, working in the constitutional and policy defense section. When animal protection laws—ballot initiatives protecting farm animals; ordinances protecting puppy mill dogs—are challenged in the courts, Cary’s team defends them. As a child, she couldn’t imagine a job like this one. Nor could most grownups: When Cary said she loved animals, adults said something like, “Maybe you’ll be a veterinarian!” It’s a response familiar to any animal-loving kid, but it doesn’t take into account the myriad careers available in the animal welfare field, from hands-on positions (adoption counselor, wildlife rehabilitator, behaviorist) to other roles (shelter architect, fundraiser, advocacy journalist).

When you expand your thinking, almost any professional interest can become a career for animals. Animal-related organizations hire accountants, graphic designers, scientists, web developers, database administrators … the list goes on. And whether you’re a high schooler pondering your future or an adult considering a mid-life career change, there are plenty of approaches to finding a fulfilling, compassionate career that maximizes your skills and makes the world a kinder one for animals.

I knew I wanted to work with animals, I just didn’t know how. 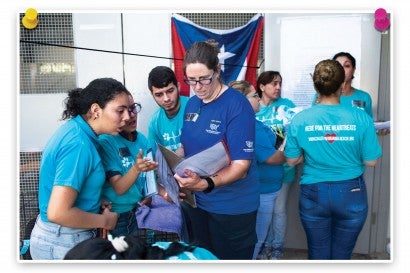 “So many people I know started out as dog walkers at a shelter, who then went on to get trained as a dog trainer, or parlayed that into an application for vet school, or ended up getting hired as adoption coordinators for the shelter itself,” says Hilary Hager, senior director of volunteer engagement at the HSUS. Hager started with a degree in international studies and served in the Peace Corps, which led to a job in volunteer management at another nonprofit, after which she managed volunteers at an animal shelter and earned a master’s degree in nonprofit leadership.

“When I look at a résumé and I see that people have been volunteering, my position is that they’ve been taking this really seriously; this isn’t just that they saw an open position. They’re rooted in this, and they understand what they’re potentially getting into,” says Hager. “They care enough about it that they have been of service, and even after they saw how challenging it can be, they still decided this is where they want to be.”

Chris Schindler, on the other hand, needed to get out of the house as a teenager. He found a job cleaning kennels at an animal shelter in Washington, D.C., where he quickly decided that he wanted to investigate animal cruelty as a career. From there, he became an animal control officer and then field adviser at what was then the Washington Humane Society, then joined the HSUS’s puppy mills and dogfighting teams, and finally returned to D.C. to oversee dozens of animal control and humane law enforcement officers, animal cruelty investigators and program managers as vice president of field services at the Humane Rescue Alliance.

There’s no one right way to enter the animal welfare field, but entry-level jobs or volunteer work can show hiring managers that you have the passion, drive and basic knowledge needed to hack it full time. And don’t be afraid to use your volunteer experience as networking opportunities. Reach out to your contacts in the field, and consider that several HSUS staffers were hired after handing out résumés at the HSUS-sponsored Animal Care Expo and other animal welfare conferences.

Help the animal-loving kids in your life get out of the “You can be a veterinarian!” rut by exposing them to all sorts of animal welfare opportunities.

Check with nearby shelters and animal sanctuaries for volunteer openings. Although some organizations restrict minors’ interactions with animals, others welcome pint-size advocates. Look for organizations with humane education programs or kid-focused opportunities, such as reading to nervous shelter dogs.

Gather friends and make it a group effort! Last summer, an Atlanta-based Girl Scout group built a greenhouse at the HSUS-supported Project Chimps sanctuary. Not only did they earn an award for their service, but they also learned about the chimpanzees who live at the sanctuary.

Animal-loving teens can seek out colleges with programs related to animal welfare. Canisius College, Tufts University, Appalachian State University, New York University and the University of Colorado all have such programs, but that’s not an exhaustive list. And of course, you don’t need an animal degree to get started! 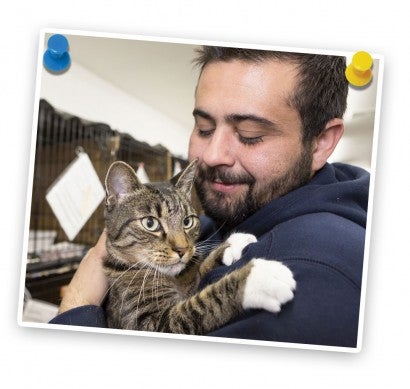 Chris Schindler visits with a cat rescued from a flooded home in Lavallette, New Jersey.
Lisa J. Godfrey
/
For the HSUS

“I knew I wanted to work with animals, I just didn’t know how,” says Lindsay Hamrick, director of companion animal policy at the HSUS. A program allowed her to shadow veterinarians during her senior year of high school, and she went on to study animal science and psychology in college, work at a chimpanzee sanctuary in Guinea for six months, obtain a master’s in animals and public policy and then become the director of operations at a New Hampshire shelter. For most people wanting to enter the field, this probably sounds pretty intimidating.

But Hamrick notes that people should weigh the cost of education (i.e., will you be paying student loans until you retire?) against the potential benefits (i.e., how much does specialized education really help in the field?). Although Hamrick wouldn’t take back her education, she says that her hands-on experiences gave her the best grasp of the issues that animals—and people who work with animals—face.

Schindler’s experiences were worth their weight in, well, a diploma. “I got my GED at 17, and I never went to college or did any higher education. I never really felt like I was at home in that type of work,” he says, adding that he bought his first suit at Target for his interview with the HSUS. “My work ethic and willingness to buckle down helped me create my own career path.”

Of course, some careers do require specialized education, as Cary experienced. In high school, she attended a social justice program, where she met with grassroots activists and attorneys from the civil rights movement. She saw how the two approaches worked together, eventually leading to long-term, structural change made and enforced in the courts. “And that was just really inspiring to me,” she says.

In college at the University of California, San Diego, Cary and another student started an animal welfare group to protest medical testing on dogs. One spring, she interned at the Fund for Animals (now an HSUS affiliate). “I met a couple of other people who were pursuing animal law and thought to myself, ‘My goodness! This is something you can do as a career!’ ” That epiphany (along with her participation in two HSUS-led lawsuits) led her to law school at Northeastern University, which led to a legal clerkship with the HSUS, which eventually led to a position here. She’s been with the organization for 10 years. “There are many valuable parts to play in animal protection, and the law is where I feel like I can personally have the biggest impact,” says Cary.

For hands-on positions, Schindler says that above education, he looks for animal handling experience and passion. You can train people in animal handling techniques, but innate animal handling skills and the right personality can’t be taught, he says, noting that you can’t be afraid or reactive when you’re alone in the field. He often promotes from within and recently promoted a front desk associate to animal control officer. Those interested in working in the field can join animal control officers for “ride-alongs,” which provide a better idea of what the job requires.

“You really have to learn from responding in the field and interfacing with people and the public,” says Schindler, noting that the Humane Rescue Alliance gets 20,000 service calls each year. Even after 23 years in the field, “I don’t know everything. Nobody does. So we all have to keep learning from each other.” 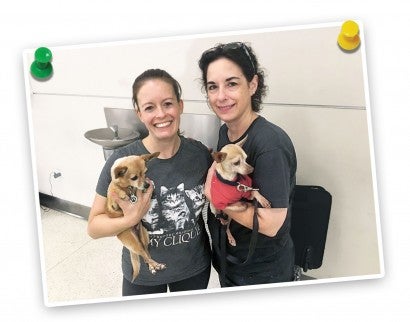 Lindsay Hamrick (left) and Kathleen Summers (of the HSUS puppy mIlls campaign) prepare to fly home with two pups rescued during Spayathon for Puerto Rico.
Kathleen Summers
/
For the HSUS

“You can kind of match your skill and your vocation with your avocation for animals,” says Hager. Lawyers could be animal protection litigators, police officers could be animal cruelty investigators, nurses might enjoy being animal caregivers, the business-minded might become shelter directors, and the outgoing might be attracted to fundraising or community outreach.

Both hands-on and behind-the-scenes opportunities abound in the shelter/rescue field alone. Expand your job search to other players in the animal protection movement—farm animal sanctuaries, wildlife rehabilitation centers, political advocacy groups—and you’ve got even more possibilities.

“Cast a wide net when you’re considering how to help animals,” suggests Cary. Get involved in different ways, “whether that’s attending an anti-fur protest or writing letters to your local officials about a housing development that’s ruining habitat for animals.” Try on plenty of hats to figure out how best to use your skills.

Hager also notes that every nonprofit has a board of directors. Whether you’re a finance guru, an expert mediator or an entrepreneur, “it’s a way for people to leverage their expertise and their connections in the community to help strengthen the organization,” she says, adding that many volunteer centers and recruiting sites list board openings. “It’s cool to know that you can help the organization get where it needs to go.”

“Now the animal protection [and] animal welfare world is so vast,” adds Hamrick, “really the challenge is just figuring out what you want to do.”

Check out these sites for your next career move!

Or visit our Careers page.