Grieving the loss of a companion animal

Corey Roscoe was in college when the tortoiseshell started hanging around her apartment building’s trash and crying loudly.

“These loud cries across the parking lot were like the beacon for my inner cat person,” says Roscoe, director of humane policy volunteer state engagement at the Humane Society of the United States. Roscoe started feeding the vocal feline, and after several weeks, the cat allowed Roscoe to touch her. After a few months, she allowed Roscoe to corral her into a carrier and take her to the vet. From then on, Roscoe had a pet: Angel.

“I was feeling kind of lonely at the time, and here’s this very loud cat basically calling me to intervene in her life. I just felt like it was one of those guardian angel situations,” Roscoe says. Over two decades, as the pair moved from Ohio to California to Florida, Roscoe’s friends and family became fond of the expressive cat, as well. 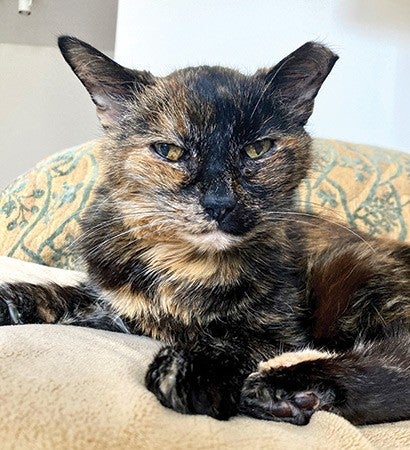 Angel the cat was a beloved companion for two decades.
Corey Roscoe
/
The HSUS

“She was known throughout her life to be very, very loud,” says Roscoe, whose job includes public speaking. “I got the cat version of myself.”

Then, in late May, Angel became withdrawn and felt cold to the touch. Two decades after Angel first trusted Roscoe to take her to the vet, she trusted her one last time. On a couch at the vet’s office, Roscoe placed Angel to the right—the side she always preferred at home—as the vet gently sedated and then euthanized her.

“She was my first and only pet as an adult,” says Roscoe, whose chance encounter led to a relationship spanning her 20s and 30s. “Probably the hardest thing I’ve ever had to do was come to terms with the reality of her passing.”

After Angel’s death, Roscoe took the two pet bereavement days offered by the HSUS, during which she mostly cried. Friends, family and co-workers rallied around her, sending cards, gifts and flowers that Roscoe placed around Angel’s ashes.

What resulted was a “sort of shrine,” says Roscoe. Although she felt a little awkward, she posted a tribute to Angel on  Facebook and was touched by the supportive comments. Eventually, Roscoe realized she’d accidentally recreated a funeral.

There’s a reason we value these symbols of mourning, she says. “When I look back at my shrine, or I look back at those weeks, the months, and I remember the outpouring of love? That’s what got me through it all.”

Given Roscoe’s experience, it’s no surprise that when Cleveland’s The Plain Dealer accidentally printed a pet obituary alongside its human obituaries in March, the response was divided between outrage and gratitude. Readers responded so passionately to the mistake that it prompted two apologetic letters from the editor—and the promise of a new section in the paper for pet obituaries.

Many readers felt an affinity with the pet owner, who had (accidentally) been able to publicly mourn their pet rather than experience “disenfranchised grief” (grief that isn’t acknowledged by society).

“If there had been the option of an obit we probably would have run one,” wrote an 81-year-old reader on the death of his dog Murphy. That’s likely because numerous studies show those who experience pet death may feel grief synonymous with the death of a human, with study authors concluding that health professionals should provide similar bereavement support for both.

The pet care industry is getting wise to the need for memorialization—offering jewelry made from cremation ashes and portraits, statues, plush animals and more featuring deceased pets—but the concept isn’t new. Baltimore Humane Society in Maryland has offered pet funeral services and burials in its 365-acre cemetery for nearly a century, says pet funeral director and bereavement counselor Veronica Van Hof. She hosts funerals almost daily, which range from large affairs with food, decorations, music and slideshows to quiet graveside services.

“We know how painful the loss of a pet is. We know how closely intertwined in our lives and families they are,” explains Van Hof.

So intertwined are pets in families’ lives that when one family lost their dog and their young son at the same time, they asked for Van Hof’s help with a logistical problem: They desperately wanted their dog’s ashes placed in their son’s casket. Amid the family’s unthinkable loss, Van Hof was able to find a crematory that could take the dog last minute, then waited on site and rushed the ashes back. The best friends were buried—together.

We know how painful the loss of a pet is. We know how closely intertwined in our lives and families they are.

Baltimore Humane also offers monthly bereavement support services and an annual Pet Memorial Sunday, which features guest speakers, a musician and a flower ceremony. On Facebook, attendees described this year’s ceremony as “what our heart needed” and “a much-needed step in our grieving process.” One mother and son travel from Illinois to visit their dog’s grave each year.

“Everyone always goes, ‘these are the stages of grief,’ ” says Jennifer Gerber, a volunteer who facilitates the support group, but “you meander through the different stages, back and forth and in and out. It’s not a linear process. A lot of people come to the group and ask, ‘how long can I expect to feel this way?’ and the answer is there is no answer.” 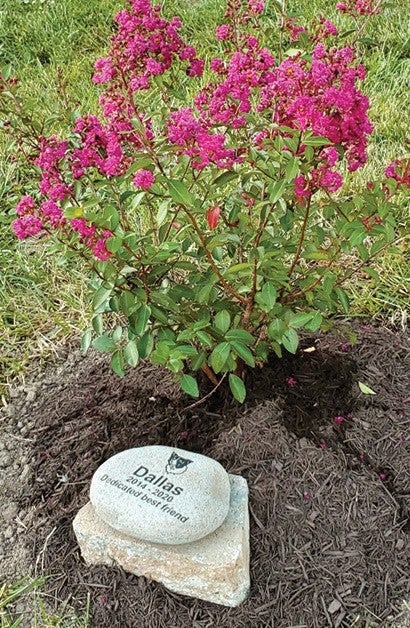 Gerber herself started out as a bereavement group participant after losing Dachshund Gracie in 2016. “It was a tremendous help to me,” she says.  “It’s like entering a whole other world when you’re in a room with other people who you don’t have to explain yourself to.”

Gerber feels strongly that society doesn’t treat pet loss with the gravity it deserves, and new research supports this sentiment. Participants in a small study of women over 55 who experienced pet loss reported weeks to months of intense grief, as well as the perception that it was dismissed by others.

The study authors wrote that “there are few socially acceptable and viable death rituals for people bereaved by [pet] death. If bereaved [pet] owners are unable to express themselves, the healing process may be complicated or prolonged.” Likewise, Gerber worries that when people are told, implicitly or directly, to “get over” the loss of a pet, they won’t seek help managing their grief.

“When they pass, it’s sort of like the history of your life flashing in front of you, as well, because they are tied to those moments in your life,” says Roscoe. “Without embracing that active mourning, without allowing myself to cry when I felt sad, I would have halted progress toward moving through the grief process.”

“You’re always going to have a portion of society … that doesn’t understand the bond that a person can have with a pet,” adds Gerber, but pet owners come from all walks of life. “It’s this great equalizer: Just how much these people cared for their animals, and how difficult it is for them to get through losing them.”