The invasion of the chipmunks?

As the world stopped turning and the fires started burning this summer, there was a hole in my heart that only a chipmunk could fill. Shy at first, the distant object of my affection warmed to my presence, until one day we even had breakfast on the patio together: a coffee for me and a snail for Mr. Chips, who left the shell behind as a parting gift.

After another chipmunk took up residence in the front garden, I saw them everywhere: devouring some good grub (or grubs) in stumps, exploring pond rocks and leaping to pluck berries straight from vines. Was it my imagination, or was it raining chipmunks? A scan of media reports confirmed the latter, proclaiming a “banner year” in much of the East due to bumper crops of acorns over the past two seasons.

While the chipmunks were always underfoot, something was missing overhead. Where were all the butterflies? A cold, wet spring had most likely drowned some caterpillars and made others more vulnerable to hungry birds and parasites, says Ohio Lepidopterists vice president Jerry Wiedmann. But butterfly numbers are always cyclic. “They’ll have a real big year, just like your chipmunks are having a big year, and then everything that eats them has a good year. So the next year, the butterflies are really down because of the predation.”

Our perception of population numbers and density impacts the way we feel about these animals and how we treat them.

Many factors drive fluctuating wildlife populations. Some are distinctly manmade, as when mosquito spraying in Fargo, North Dakota, killed migrating monarchs in August. But others are part of the natural cycle. Young bears disperse more widely when food is scarce, but that doesn’t mean they’ve multiplied. Rabbits can reproduce more when warm winters encourage lush plants, but they won’t do so indefinitely.

Animals respond to temporary conditions, but lack of knowledge about their behaviors—and about our own role in shaping habitat—can lead to trapping, poisoning and other knee-jerk responses. Phrases like “too many rabbits” and “deer overpopulation” further trigger our confirmation bias. “Our perception of population numbers and density impacts the way we feel about these animals and how we treat them,” says HSUS urban wildlife director John Griffin. “For some people, it might take the form of ‘Oh, we planted one plant in our front yard, and the deer ate it, so now we’re overrun with deer.’ ” 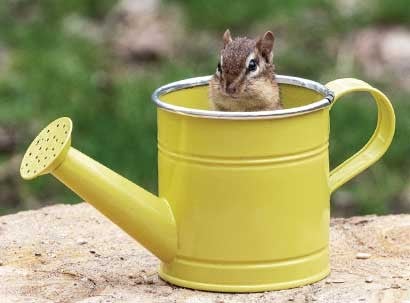 Those impressions often lead to calls for mass culls of wildlife spotted close to our homes, but perception is usually far from reality. Bears venture into human-dominated spaces not because their numbers are too great but because of manmade attractants—bird feeders, unsecured trash, pet food, even kiddie pools. Chipmunks come from other yards to eat birdseed and, according to a 2016 study, are more active when visiting feeders. That might spark fears of invasion, but chipmunks are solitary and territorial so “you really can’t get overrun,” says Penn State biology professor Carolyn Mahan. And despite pest control claims to the contrary, their burrows are too small to undermine structures. “I have never witnessed personal property damage by a chipmunk,” says Mahan, who welcomes many to her home habitat and has seen nothing more than a bit of upturned stone and flower-pot exploration. “I don’t care if they eat all my bulbs. I’ll just plant new ones. I’m just happy to see wildlife in my garden.”

Next year she may see more foxes and hawks than chipmunks, after the larger predators take advantage of the bounty and produce more offspring themselves. Beyond that, it’s hard to predict what will happen to chipmunk populations long-term because few funders support studies of animals considered common, says Mahan, “and that’s very shortsighted.”

As I write, my little friend is stockpiling for winter, unaware of the fires and floods gnawing at the edges of both coasts. But when the disasters recede, some of the first animals to recolonize barren ground will be his kin: ground squirrels, gophers and others who till soil, plant seeds and create habitat. Whether we appreciate them enough to let them fill that niche—and bring life back to wounded lands—is up to us.

Listen to "Deer Eating Your Garden?" On Our Podcast