Life outside the laboratory

Now part of Tammera Roeske’s family, Millie serves as an ambassador for the 60,000 dogs who are still being tested on in the United States.
Kendra Stanley-Mills
/
AP Images for the HSUS

To see Teddy and Millie now —playful and friendly, outgoing and affectionate—you’d never guess what they’ve endured in their short lives. As part of an unnecessary test commissioned by Dow AgroSciences (now Corteva Agriscience), the beagles were force-fed a pesticide every day for nearly a year at a laboratory in Michigan.

When the Humane Society of the United States released our undercover investigation in March, more than 500,000 people signed our petition and called the company to demand the dogs’ release. Corteva announced a week later it had ended the test and later released the surviving 32 dogs to Michigan Humane Society, an HSUS shelter and rescue partner. (The HSUS provided a grant to assist with their care.)

More than 800 people applied to adopt one of the beagles, and Teddy and Millie were among the first to find the homes they deserve. Here are their stories: 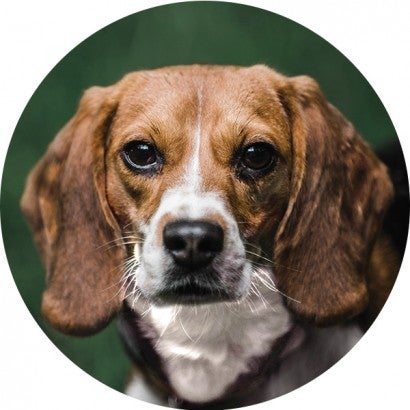 It didn’t take Millie long to adjust to life outside the lab. In fact, she hit the ground sniffing. “Nose to the ground—constantly!” says Tammera Roeske, who was over the moon when she got the call that her family had been selected to adopt one of the beagles. “She is brave and inquisitive and loves exploring all situations and environments. There is none of the fear or hesitancy that I expected.”

Just shy of 2 years old, Millie has added new energy to the household, which already included 13-year-old dogs Buddy and Mya. She has a knack for enticing the older dogs to play, even when it appears they’d rather not. “She bounces and pounces all over, encouraging them to chase her,” Roeske says. “She is just like a little sibling—always looking for that attention in any way possible.”

We truly are the lucky ones to have the opportunity to bond with such a special little girl.

Her outgoing, social nature also makes her an excellent ambassador for dogs like her. People are shocked to hear Millie’s story, Roeske says, and are horrified to learn that more than 60,000 dogs are used in research and testing in the United States each year. (The Humane Society of the United States is fighting to advance nonanimal alternatives and end unnecessary tests like Millie’s.)

“People go out of their way to thank us for giving Millie such a loving home,” Roeske says, “but we truly are the lucky ones to have the opportunity to bond with such a special little girl.”

When our undercover investigator met Teddy, he was part of a pesticide test in a Michigan laboratory.
The HSUS
Now he’s living the good life with Greta Guest and Dave Rubello and learning the everyday joys of being a dog.
Bryan Mitchell
/
AP Images for the HSUS 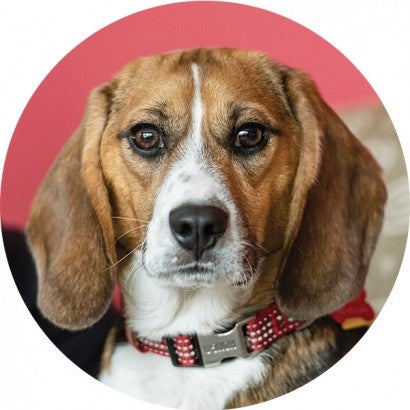 Exactly eight minutes after Michigan Humane Society posted on Facebook that it was accepting adoption applications for the beagles, Greta Guest and husband Dave Rubello submitted theirs. A few days later, they got the call.

“I really felt like I had won the lottery,” Guest says. Teddy likely feels that way, too.

In his new home, he has tennis balls to chase, squishy toys to squeak, a cozy bed to snooze on, plenty of yummy treats to eat and fellow beagle Cleo to show him the delights of being a dog. His first time off-leash in the family’s backyard, for example, he seemed unsure of what to do, Rubello remembers. Eventually, he began to tentatively follow Cleo around, doing everything she did. Now, Teddy loves romping around on the grass and chasing down balls.

Other aspects of life outside the lab were a bit easier to navigate, Rubello adds: “It didn’t take him long to figure out how comfortable a couch is.”

Like Millie, Teddy is helping spread awareness about dogs used in testing and research. He and his family have been traveling to the state capitol building in Lansing to support a bill that would require laboratories to release dogs and cats to shelters for adoption after testing is complete, rather than euthanize them. Teddy is proof that former lab animals can lead happy, normal lives, Guest says.

“I expected him to be more frightened of humans, given what others did during the testing, or even angry,” she says. “But he is just so happy to be free and has a great capacity for forgiveness and love.”