Our Animal Rescue Team deployed to Muncie, Indiana, in October 2021 ready to rescue dozens of cats living in filthy conditions inside a residential property. As rescuers entered the house, they encountered an unexpected obstacle: A black-and-white cat approached them and began rubbing against their legs, demanding to be petted.

“He was the first cat anybody saw,” says Jessica Johnson, senior director of the rescue team, who was on scene that day. “We actually had to remove him first ... because he was so interested in people and kept getting in the way, like right on our feet as we walked.” 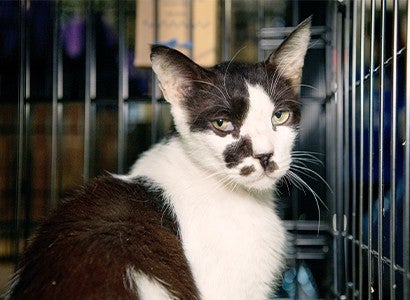 After his rescue, Miles Finch was treated for an upper respiratory infection.
Meredith Lee
/
The HSUS

Nicknamed “Oliver” during the rescue and now named Miles Finch, the friendly feline was one of 30 cats removed from the house and taken to a temporary shelter to receive medical care. Rescuers discovered that he had a severe upper respiratory infection and began treating him with a nebulizer to loosen the mucus in his lungs and throat. Throughout the weeks-long recovery process, Miles Finch remained in high spirits.

“If you were looking at him or thinking about looking at him, he wanted attention from you,” says Allison Bundock, senior specialist of animal health for the rescue team, who helped care for Miles Finch. When staff members walked by his cage, he would playfully paw at them through the grates.

Even after Johnson returned home, Miles Finch was still on her mind. Johnson’s 2-year-old daughter was obsessed with cats and had been asking for a feline companion. Johnson showed her daughter a video of Miles Finch and “her face just lit up,” she says. Johnson made the decision right then to adopt him.

With his upper respiratory infection treated and a new home in sight, Miles Finch began his journey from Indiana to Maryland. He first accompanied rescue team members to New England, where they delivered some of the other cats from the case to an HSUS shelter and rescue partner for adoption. Miles Finch, of course, insisted on riding up front in his crate with the humans.

After completing the first stop, Jenn Cherry, a former field responder with the rescue team, drove Miles Finch the rest of the way to Maryland. The two stopped at a pet-friendly hotel where Miles Finch followed Cherry around room to room. “When it was time to hit the hay for the evening, [he] snuggled up right next to me and turned his purr motor on high volume,” Cherry says.

The next day, the pair arrived at our Maryland care and rehabilitation center, where Miles Finch stayed while Johnson’s family finished moving into their new house and preparing for his arrival. The center’s staff quickly fell in love with him and spent their breaks playing with him.

After a short stint at the center, Miles Finch’s final stop was his new home with Johnson and her family. He made quick friends with Johnson’s daughter and smoothly adjusted to living with dogs after a slow introduction. One of Johnson’s dogs is called “Buddy the Elf” after the character from the Christmas movie Elf, and they thought it was fitting to name Miles Finch after another character. Now, a few months later, it’s “kind of like he’s always been here,” Johnson says.

And while rescue team members went the extra mile (literally) to deliver Miles Finch to his new home, the lovable cat helped them, too.

“As rescuers, we see animals living in deplorable conditions often, but it never gets easy to see,” says Cherry. “Having a gem like [him] on a case reminds us that there is hope for these animals, that even in miserable living conditions, some animals will never let their faith in humans cease to exist.”