Trophy hunters killed one male lion. Now his descendants are in danger.
BY Brianna Grant
Share

Fitted with a GPS collar in 2008, when he was 5 years old, Cecil became popular with visitors to Hwange National Park. He was recognizable by his distinctive black-tinged mane.
Stapelkamp
/
500px Prime

It was the shot heard around the world. An American trophy hunter shot and severely injured Cecil with an arrow after he was lured outside Hwange National Park in Zimbabwe with elephant carcass bait. About 10 hours later, the hunting party tracked him down. A second arrow ended Cecil’s life. The African lion’s death was met with sweeping global outrage over his horrific killing—and trophy hunting more broadly.

Seven years later, the male lions currently living in and around Hwange National Park may be trophy hunters’ next targets. Today, Cecil’s 25-member pride is led by brothers Humba and Netsai and consists of Cecil’s mates, daughters and grandcubs. If trophy hunters target Humba and Netsai, the remaining pride members will be left vulnerable. But it’s not just Cecil’s pride threatened by the cascading damages of trophy hunting: Only around 20,000 mature lions are left in the wild. Although multiple countries have since banned the import of lion trophies, the United States—the No. 1 importer of hunting trophies in the world—isn’t one of them, leaving the remaining members of Cecil’s pride vulnerable to American trophy hunters.

Cecil’s legacy lives on not just in his offspring, but in the fight to protect other lions from the crosshairs of trophy hunters. Cecil is remembered for the heartbreaking events surrounding his death, but he also lived a vibrant life: He created an unusual alliance with another male lion, led a pride and became a favorite among the many tourists and locals who had the opportunity to watch him in the wild. Now, Humba and Netsai inspire a similar joy among visitors to the national park. With your help, their story can end differently from Cecil’s.

The death of one lion frequently results in the death of several others through starvation, infanticide or conflict with other lions or people.

Cecil creates a coalition with another male lion, Jericho, to establish two prides in the eastern part of Hwange National Park. Researchers are surprised to see this alliance; Cecil and Jericho had previously fought each other.

Cecil is lured out of the safety of Hwange National Park with elephant carcass bait and shot with an arrow by an American trophy hunter. When he is tracked down around 10 hours later, he is slowly dying. He is then killed. 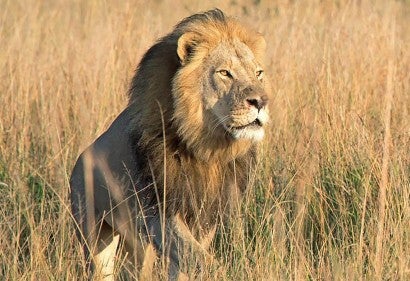 The Netherlands bans the import of trophies of over 200 species, including lions, elephants and polar bears.

More than 42 airlines restrict some or all wildlife trophies on their flights.

African lions are listed on the U.S. Endangered Species Act, prohibiting the import of lion trophies, but a loophole allows imports when it would “enhance the survival of the species.”

The Humane Society of the United States, Humane Society International and Humane Society Legislative Fund send a letter to the U.S. Fish and Wildlife Service, sharing research that shows trophy hunting of lions in Zimbabwe is poorly managed and lion hunting quotas are not science-based. 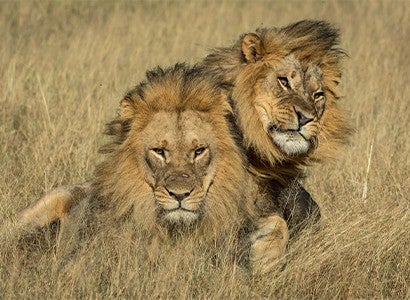 In September, the HSUS, HSI and HSLF write to the U.S. Fish and Wildlife Service again, stating that the agency is not fulfilling its mandate under the Endangered Species Act by allowing imports of African lion trophies from Zimbabwe and is using faulty information to justify issuing permits.

In December, the United Kingdom announces plans to ban trophy imports of over 7,000 species, including lions, elephants and giraffes.

Urge the USFWS to Stop the Import of Lion Trophies