When the U.S.-based rescuers from Humane Society International touched down in Seoul in mid-October, they faced the usual jet lag. But rather than tackle it by jumping head-first into their work—shutting down their 17th South Korean dog meat farm—they went straight to a hotel … and straight into quarantine.

Rescue work during a pandemic looks a little different, but it’s no less urgent. As the team waited out their two-week quarantine, they were anxious to meet up with their Korean colleagues and to get started. More than 150 dogs—including Korean jindos, Tosas, Pomeranians, Lab mixes, a German shepherd and more—were waiting on a farm in Haemi, their owner ready to get out of the business for good. The dogs lived on chains or in cages with little protection from the elements and limited access to food, fresh water and human interaction. Some had eye infections or broken bones that healed poorly without treatment, while others were dangerously underweight.

Before their rescue in October, the dogs from this meat farm were kept in rows of dilapidated, filthy wire cages, surrounded by their own waste, without adequate shelter from the elements. Humane Society International helped close the operation, transition the farmer to a new livelihood and transport the dogs to the United States and elsewhere for adoption. HSI’s Nara Kim walks a dog out of the muck to safety.
Jean Chung
/
For HSI

“When we found these dogs, they had looks of utter despair on their faces,” says Nara Kim of HSI/South Korea. “Many of them were covered in painful sores and wounds from neglect, some had inflamed eyes and peered out blindly from their cage. I am grateful that when they finally receive veterinary care and can open their eyes, they will never have to see the farm again.”

When their quarantine ended, the team joined Kim and began the hard work of closing the farm, removing all of the dogs and readying them for a 7,000-mile flight to the U.S. There a new team of experts would take over, dedicated staff and volunteers who would tend to the dogs’ physical, social and emotional needs, getting them ready for new lives with loving adopters.

Watch: Behind the Scenes See a video diary from HSI rescuers’ strict, two-week quarantine in South Korea, videos of the dogs playing at the temporary shelter here in the U.S. and more.

While the team in South Korea prepared the dogs for their long flight, an HSUS team was busy transforming an empty airport hangar outside Washington, D.C., into a temporary shelter. Trucks brought in supplies, including 10,000 pounds of food—enough to feed the dogs for a month—chew toys, veterinary materials and other necessities.

All of the dogs received vaccinations before boarding the flight, plus flea/tick treatment and a head-to-tail exam at the temporary shelter, likely the first time many of them have received medical care, says HSUS veterinary technician Allison Bundock.

At the shelter, each dog has a double-sided kennel (smaller pups have one side) with his or her very own bed—a dramatic departure from the filthy, cramped cages they were used to. The team replicated the layout from the farm as closely as possible to keep animals who shared cages together, while providing privacy screens or other modifications for animals who needed more time to adjust to their new surroundings.

While making the rounds soon after the dogs arrived, shelter manager Gina Lantella noticed a timid Tosa mix named Dohiyi trying to sleep sitting up in the back of her kennel, a sign she’s too afraid to lie down. The team added a transport carrier to her space so she can feel safe while she snoozes.

Lantella usually works with animals rescued from puppy mills and disaster situations, but she says the needs of dog meat survivors are the same. “Trauma is trauma,” she says, “and these guys have been through it.”

To help the dogs develop a routine and sense of normalcy, shelter staff and volunteers stick to a daily schedule. Breakfast, bathroom break and kennel cleaning, then each pup gets a “mint on the pillow,” Lantella’s way of describing a fresh chew toy smeared with cream cheese or peanut butter, or another type of treat left on the bed. After lunch is quiet time, when Beethoven’s “Moonlight Sonata” (a canine favorite, Lantella says) floats from overhead speakers.

Providing a routine and consistency is a way to build their trust and give them a sense of control in an otherwise crazy time.

“Providing a routine and consistency is a way to build their trust and give them a sense of control in an otherwise crazy time,” Lantella says. “They know what’s coming next, no surprises.”

Later in the afternoon, caregivers offer customized activities to engage each dog’s senses. Jeff, a boisterous Tosa mix who quickly won over the staff with his antics (he flipped his metal water bucket onto his head so many times the first day that the team replaced it with a sturdier rubber version, which he promptly shredded), got a pizza box with Cheerio-topped dollops of cream cheese and peanut butter inside.

For Dohiyi, the fearful pup who slept sitting up, Lantella wiped a dollop of whipped cream at the back of her kennel. “There’s no rush, take your time,” Lantella said as Dohiyi inched toward the treat and cautiously licked it. “There you go, kiddo. Good stuff, right?” 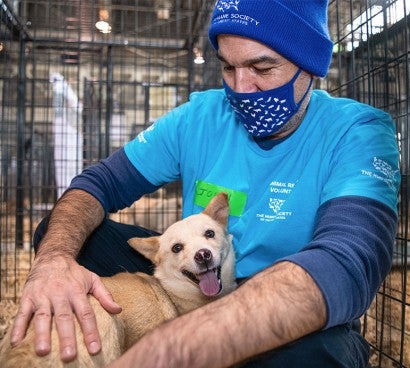 Located in an airport hangar, the shelter offers plenty of space for exercise, play and socialization with the help of caregivers such as HSUS staffer John Moyer.
Meredith Lee
/
The HSUS

Jody, a buff-colored jindo mix, wiggled with excitement while receiving pets from John Moyer, a program manager for the HSUS Stop Puppy Mills campaign and a volunteer at the temporary shelter. Moyer stopped petting every now and then to see if Jody wanted more (a way of seeking consent, so animals can signal when they’re ready for the visit to end), and she happily nuzzled his face for attention.

“They seem to know they’re in a good place and it’s going to be OK,” Moyer said, scratching Jody behind her ears. “It’s all belly rubs and treats and good stuff from here on out.”

Love at first sight for this sweet pup

HSUS transport driver Mark Watson expected it to be just another day on the job, but then he saw Suki. While cleaning kennels at the temporary shelter, Watson spotted a German shepherd sitting quietly on her bed, her eyes following his every move.

“I went over to her kennel to say ‘hi’ and all she wanted to do was give loves,” Watson says. “I immediately went to ask how to adopt her.”

Before driving her home to Montreal to meet new canine siblings Floyd and Boomer, Watson took Suki out for some exercise in the great outdoors. When she first got her paws on the grass, she barely lifted her nose off the ground, Watson says. “All the smells were new for her and she loved every second.”

Now Suki is experiencing even more joys of being a dog: snoozing on a soft couch and cozying up with her family for snuggles, finally in the loving home she deserves.

Where are they now?

Some of the dogs rescued from our 17th dog meat farm closure required extra care and patience as our team worked with them to overcome behavioral challenges.