Why you shouldn’t fear snakes

Make space in your habitat for these shy, misunderstood animals
BY Nancy Lawson
Share

Most snakes just want to be left alone, and many—like this smooth green snake—easily blend in with their surroundings.
JasonOndreicka
/
iStock.com

They slip soundlessly through our landscapes, cloaked in a rainbow of colors and patterns that help them become one with bark, rocks, leaves and soil. Often the only sign of their existence is what they leave behind: ghostly shed skins imprinted with shapes of eyes and scales, traces of pigmentation and other clues to hidden lives.

While snakes are some of the shiest creatures to cross our paths, they’re among the most persecuted. Because these reptilian wallflowers are hard to observe, we know little about their natural behaviors—and we fill that knowledge gap with myths steeped in fear and misunderstanding. Chief among them is that snakes are out to devour us.

Even if that were true, it would be an impossible mission. “They swallow their food whole, and in the United States there are no snakes big enough to eat us,” says Melissa Amarello, executive director of Advocates for Snake Preservation. “They just don’t want to have anything to do with us.”

Lacking limbs, facial expressions and vocalizations, snakes are inscrutable to a species that reads intention into every waving hand, raised eyebrow or—when interacting with nonhuman companions—wagging tail and beseeching meow. But scientists have seen beyond snakes’ scaly exteriors and gained insights into social dynamics, watching them commune with friends, defend young and keep snakelets warm. By recording activity at an Arizona black rattlesnake den, Amarello and her partner even discovered pregnant females helping mothers who’d just given birth. “It’s usually the youngest one who’s getting stuck with the babysitting [duties]. She’s still out basking; she hasn’t given birth yet.” 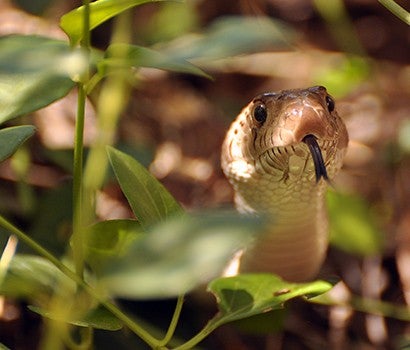 It’s a rare glimpse most of us never experience. If we’re lucky enough to spot snakes, they’re likely well aware of our presence and already fearful. If they can’t slither away, they’ll employ defensive maneuvers: a hognose snake might play dead, a rattlesnake might rattle, a cottonmouth might open wide to appear scary. The chance of being bitten is practically nil but increases dramatically when people try to capture or kill snakes, says ecologist David Steen, author of the new book Secrets of Snakes: The Science Beyond the Myths. “They can be intimidating, but it’s easy to lose sight of the fact that you are so much larger,” he says. “They’re just little animals, and they’ve got their own lives going on. They’re fascinating creatures with a lot of mysteries left to reveal.”

Among those mysteries is chemical communication. “Scent is everything to them,” says Amarello, who was overwhelmed by the musty smell of fear at a rattlesnake roundup in Texas, where thousands of snakes are flushed out of dens with gasoline, tormented and killed for entertainment. “If those were rabbits … it would be excruciating to experience because they would be screaming out loud and we could all hear it. We just can’t hear it when snakes are doing it.”

The same cultural narratives that fuel such spectacles also lead homeowners to kill countless snakes and relocate others outside home territories, a practice likely to cause suffering and early death. Coexistence is far more humane and rewarding. Even if you live among venomous snakes, you can still provide them with native plants, rock piles, fallen leaves and logs while also taking precautions: Keep wide paths, use flashlights, look before reaching into plantings, keep dogs leashed and cats indoors, and, most of all, get to know your wild neighbors.

Go snake-watching by walking slowly and using all your senses, suggests Steen, who saw three racers behind his Florida home after first hearing a sound like “a rope being dragged through the woods.” Use binoculars, advises Amarello, and celebrate snakes visiting your healthy ecosystem. “The fact that they are there,” she says, “means you’re doing something right.”