Their ‘moments’ have passed

Abuses at puppy mills, roadside zoos and other facilities must now be posted online
BY Karen E. Lange
Share

Until August, businesses such as puppy mills could get a slap on the wrist rather than a citation for filthy conditions and other violations of the Animal Welfare Act.
Michelle Riley
/
The HSUS

Dryfork Kennel owner Bill Nored should have known the rules. In 2019, U.S. Department of Agriculture inspectors cited him for violating the Animal Welfare Act when they found a poodle at his Prim, Arkansas, commercial breeding operation with a plum-size mass on her chest. They also discovered a Pomeranian with an eye that had turned opaque and red and developed a protrusion.

Several months later, inspectors cited Nored again, this time for failing to treat a second poodle for advanced dental disease. His other violations during the past decade include a puppy who died without being taken to a veterinarian, limping dogs, dogs with matted fur and a dog with a broken jaw. But in 2021, when inspectors discovered rusty cages and incomplete records on site, they left these problems out of official inspection reports, writing them up only as “teachable moments.”

Eclipses Kennel owner Linda Kent should also have understood what the Animal Welfare Act requires. In 2017, a USDA inspector cited her Elgin, Kansas, commercial breeding operation because one of her dogs had dental issues so serious it was likely painful to eat. Inspectors found other violations in 2018, 2020 and 2022, but Kent wasn’t officially cited. She too was written up only for teachable moments, though state inspectors noted built-up dirt and grime in pens and holes in dirt floors and flooring. A Humane Society of the United States investigator photographed dogs in a dirt yard attached to a structure made of rusted, cracked metal sheets and leaning poles.

Allowing inspectors to downplay some Animal Welfare Act violations as teachable moments was supposed to encourage breeders to quickly correct problems, according to the USDA. But these teachable moments obscured actual conditions and prevented consumers from seeing the full picture about breeders such as Nored and Kent. (Both have appeared in the HSUS’s annual Horrible Hundred report on puppy mills—inhumane breeding operations that fail to give dogs adequate care.)

There’s no reason that a federal agency funded by taxpayers should be concealing information.

Not only were consumers kept in the dark, but pet stores in at least six states that forbid the sale of puppies from breeders who violate the Animal Welfare Act (Arizona, Connecticut, Louisiana, New Jersey, Ohio and Virginia) bought puppies from operations that did not comply with the rules because some violations were called teachable moments and left out of inspection reports.

“There’s no reason that a federal agency funded by taxpayers should be concealing information,” says Kathleen Summers, director of outreach and research for the HSUS Stop Puppy Mills campaign. “A lot of [teachable moments] never went online. Some of them cannot be found to this day.” 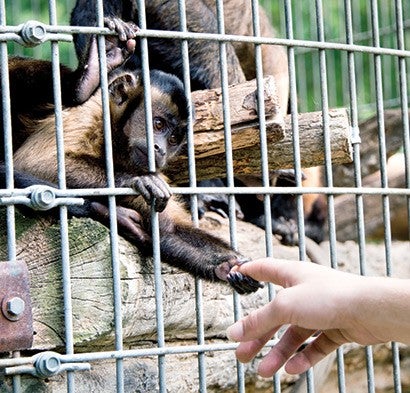 Roadside zoos and research labs also benefited from the USDA’s lax enforcement, with violations that might have carried fines reduced to “teachable moments.”
Michelle Riley
/
The HSUS

On Aug. 1, the USDA finally ended the use of teachable moments following years of work by Humane Society Legislative Fund, the HSUS and other advocates, who got Congress to direct the USDA to end the program. USDA inspectors are now required to record all violations of the Animal Welfare Act by breeders, animal research labs, captive wildlife facilities such as zoos, and other licensees in their reports and to post the data online.

And the idea behind them—that certain violations don’t matter—was wrong, says Debbie Leahy, HSUS senior strategist for captive wildlife. “If a facility can’t comply with the smaller things, what makes you think they’re going to be able to handle the bigger things?”

HSLF worked with the Chairman of the House Appropriations Subcommittee on Agriculture, Sanford Bishop (D-Ga.), and other members of Congress who determine the USDA’s budget, to push the agency to end teachable moments. Both Democratic and Republican members of Congress—most recently, 203 representatives and 43 senators—requested language in bills funding the USDA directing the agency to end teachable moments, says Mimi Brody, HSLF director of federal affairs. After three years of the USDA ignoring these instructions from Congress, says Brody, the agency finally got the message: Stop using teachable moments.

The USDA was focused on making things easier for industries, rather than serving the public, says Brody.