Tracking a decade of pain and progress

In May, we published our 10th annual Horrible Hundred report, a list of problem puppy mills in the United States.

The source of many puppies sold online or in pet stores, puppy mills are large commercial dog-breeding operations that put profits ahead of animal welfare. Sick or injured dogs, unsafe cages and inadequate protection from the heat and cold are among the issues frequently documented at puppy mills. To compile the Horrible Hundred each year, we look through thousands of pages of federal and state inspection reports, searching for severe and repeated violations of animal care standards.

Our report doesn’t comprehensively chronicle the absolute worst puppy breeders and sellers—that would be a nearly impossible task, given that many of the estimated 10,000 puppy mills in the U.S. aren’t inspected at all. Instead, the Horrible Hundred lists the known puppy mills that we’ve documented. Our goal is to alert the puppy-buying public to puppy mills’ alarming practices and to press government decision-makers for more vigorous enforcement. Sadly, we’ve never had any trouble finding 100 problem breeders to fill the Horrible Hundred list.

In this edited interview, members of the Humane Society of the United States’ Stop Puppy Mills campaign discuss the Horrible Hundred report and our ongoing fight against this inhumane industry.

Is there a lot of confusion about puppy mills?

Kathleen Summers (outreach and research director): People don't realize that puppy mills are legal. A lot of people think that when a puppy mill is discovered, it's closed down and animals are rescued. What they don't realize is that when violations are found of the standards under the law, often people aren't really punished for it; they're simply given a paperwork violation, and they continue on their way.

How is our fight against puppy mills going?

Amanda LoCoco (research analyst): A lot of people just assume that if someone is a repeat violator, they're going to be shut down. We've seen people repeatedly featured in our report. That's extremely troubling, and a lot of these repeat offenders have lots of dogs. It haunts you that hundreds of dogs are suffering for years on end, when people know that these puppy mills are problematic.

John Goodwin (senior director): In terms of public awareness, the term “puppy mill” is understood now. That said, there is a disconnect in the public’s mind between puppy mills, which they know are bad, and where the puppy they're looking at came from. A lot of people don't make the connection that the puppy, whether they're in the pet store or on a website or even in the fast-food restaurant parking lot, might have come from a puppy mill. That's an area where we still have to connect the dots.

The cover of our 2020 Horrible Hundred report featured Pearl, a pregnant, malnourished and worm-ridden dog rescued in 2019 from a North Carolina puppy mill.

People buying dogs in pet stores probably think, “This has to be legitimate. I'm buying this dog from a store.”

Goodwin: That's right, and the salespeople do everything they can to reinforce that sentiment. And frankly, the customers are often easy pickings, because someone falls in love with the puppy in the window, and then they want to believe the salesperson’s pitch that it's OK to buy this puppy mill puppy, that the puppy doesn't have a mother in a cage somewhere.

Summers: When people do ask questions about where their puppy came from—which we advise people to do when they're getting a pet—they are told that this is a licensed breeder, and they assume that the license means that the person met some real quality standards. That's what we expose in our Horrible Hundred report. Almost every breeder in our Horrible Hundred report, if they're not U.S. Department of Agriculture licensed, they're state licensed, or both.

What we're showing is that even some of these people who have been licensed for many years still have absolutely horrific conditions. We have some cases where they've been found with multiple dead puppies on their property, and nothing happens. That's what we really want to expose to the public with this report, and we do believe that it's encouraged several states to improve their laws.

A lot of puppy mills sell through the internet, where they can pretend to be humane operations. How do you combat that?

Summers: That's another recommendation we have: Never to buy a puppy online, always go and visit the breeder. Ideally, we would like to see puppies only coming from small-scale breeders who have the mom in their home.

LoCoco: We’re in such a consumer-driven society these days, and we want to be able to buy anything at any time we want, but a puppy is not a product. You should not just be able to go online and buy a puppy and have her shipped to you; she’s not a pair of shoes, she’s not a handbag.

How do you feel about being part of the fight against puppy mills?

Goodwin: I'm optimistic about it. I've worked on a lot of different animal issues, and I do see that the American public really does love dogs. The number of families with dogs is much higher here than just about anywhere else in the world. You see the amount of money that people are spending to give their dogs better-quality food and higher-quality medical care, and that gives us a reason for optimism, to believe that when push comes to shove, the American public will demand that puppy mills be done away with.

Another thing we often forget is to keep telling people to look in shelters first when they want to get a dog. Our first piece of advice should still be to go to shelters. Even if you think you want a cocker spaniel, you might go to a shelter and fall in love with a beagle.

Veterinarian Alina Soderholm helped save three of Pearl’s puppies.
Alina Soderholm
Soderholm adopted one of the puppies and named her Alis, which comes from the Latin phrase for “she flies with her own wings.” Soderholm says, “She goes everywhere with me, including work every day!”
Alina Soderholm
Since the launch of the first Horrible Hundred ... 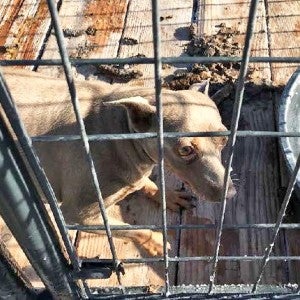 Have passed new laws to crack down on puppy mills. 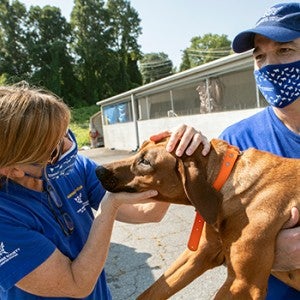 Have been covered in our 10 years of reports (many are repeat offenders). 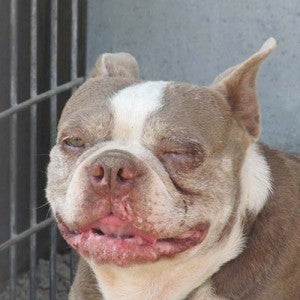 From our past reports appear to have closed or lost their licenses.

The puppy dealers below have been in at least three previous Horrible Hundred reports and are in the 2022 report as well. (The owners’ names are in parentheses.) As of May 2, 2022, to the best of our knowledge, they were all still licensed.