Even if you’re part of a homeowner association, a wildlife-friendly garden is possible
BY Nancy Lawson
Share

Sometimes my most significant revelations are the annoying, kick-me-in-the-pants ones that follow a period of contented denial. One of those seismic shifts in thought came last year at a dinner party, when a man nearly half my age honed in on a flaw in logic I’d subconsciously buried.

A plant science major starting a career in sustainable agriculture, he initially seemed an ally in the natural landscaping movement. But upon hearing of my wildlife-friendly garden, he was skeptical, dismissively suggesting my little plot of land was merely a “conservatory.”

In his early 20s, he was already defeated about the state of the world, and I quietly bristled at his sense of hopelessness. But after some reflection, I had to concede he had a point. I could have the most wildlife-friendly two acres on the planet, but if my neighbors continue to mow and poison and fertilize everything in sight, what have I really accomplished for animals?

Since then, readers and audiences have posed questions indicating a similar desire to affect the larger culture, asking, “How can I get my homeowners association to let us plant native plants?” and “What can I do to persuade my neighbor to stop mowing and spraying pesticides?”

The frequency of the inquiries surprised me at first, given the growing abandonment of outdated “weed laws” that used to leave little room for anything but turfgrass. In recent years, municipalities across the U.S. have embraced conservation landscaping and begun rewarding residents for implementing it. Consumer Reports devoted space in its May issue to encouraging it. Even the White House is on board.

“The battle is no longer really with government entities,” says Bret Rappaport, a lawyer who pioneered the legal fight for natural landscaping in Chicago decades ago. “They all get it.”

But in communities overseen by homeowners associations—where 20% of all U.S. homeowners live—progress can be slower. While some HOAs support and even codify gardening for wildlife, many are still attached to the anachronistic symbol of suburbia: lush lawns that, combined with commercial uses of turfgrass, collectively suck up more water than any other irrigated crop in the country.

In my own Maryland stomping grounds, some HOAs “have the perception that a turfgrass lawn is the only type of beautiful yard,” says Rachel Beebe, stormwater aide for the Howard County Office of Environmental Sustainability, which offers incentives for replacing grass and impervious surfaces. “So they’re not very happy with native plants in landscaping or with rain gardens. And then I’ve also heard of HOAs that regulate rain barrels very, very strictly—you can only have one rain barrel, and it needs to match the color of your house, and it needs to be in your backyard.” 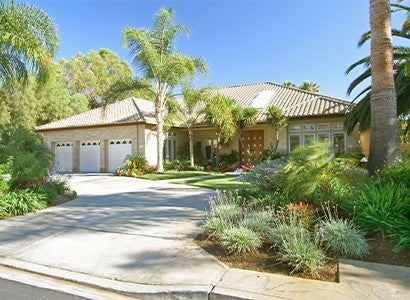 Caught in the middle are people like Renee Parker, who tried to keep the HOA-regulated grass species green on her sloping lot in Florida’s Orange County. After pouring much water and effort into the endeavor and still ending up with brown patches, she chose a more sustainable route. Following recommendations from the Florida-Friendly Landscaping program, Parker requested permission to install a less thirsty species as well as plants to attract butterflies. When she received no response, says attorney Barbara Billiot Stage, Parker began planting—and sowed the seeds of an HOA-filed lawsuit.

Though such disputes are usually resolved through mediation, they’re likely to become more common. It will take all of us who care about the natural world to keep  the momentum for change going. No matter where you live, you can use these tips to defend your own wildlife-friendly landscaping and promote the concept to others. 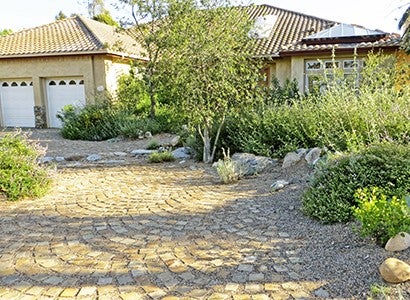 After: Homeowner Dennis Mudd converted his landscaping to mostly native plants and a permeable driveway. “The bird life is incredible,” he says.
Dennis Mudd

While many homeowners associations require a kempt look or a low vegetation buffer near the road, “it’s kind of an urban myth that you can’t have native plants,” says Randy Pensabene, who drafted guidelines for working with HOAs for the Texas Native Plant Society. The notion comes from an inaccurate perception—sometimes on both sides—that wildlife-friendly plants are rangy and ugly.

Studying the bylaws helped Mary Karish win a dispute over her front yard garden that provided food for people and pollinators and used “SmartScape” plants recommended by the city of Coppell, Texas. Karish even found in the decades-old HOA rules an absurd stipulation that sandbags and hay bales be used to control stormwater runoff. Such practices may have made sense to developers who suggested them, but it’s hard to imagine any modern-day association sanctioning a sandbag-filled yard. If you review bylaws, says Karish, “nine times out of 10, you will be able to poke a lot of holes” in the policies.

Homeowners can also take a cue from developers who find creative ways around zoning ordinances. “Figure out everything you can do and still technically comply,” says Rappaport. “If there is a vague statement that says you must have a cultivated yard, you could certainly argue that a natural landscape is cultivated. It didn’t just spring up on its own.”

Pro-ponents of large manicured lawns argue that natural landscaping decreases property values. The opposite is true. “When you look at listings, if someone has a water-wise garden, they always highlight it because right now nobody can afford to water their grass and because we’re in the midst of a devastating drought here in the Southwest,” says Mylène Merlo, a real estate adviser in California.

When Merlo approached her own HOA about converting common areas to native plantings, she focused on what mattered to them most: the high cost of fertilizers and irrigation needed to maintain nonnative vegetation. “They were highly supportive of it because of the water bills,” she says. “If you approach it from a financial perspective, they’re very, very responsive.” 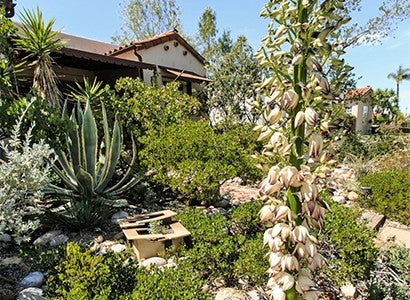 Negative reactions often derive from a fear of the unknown. Showing proof of your concept can help dismantle that fear. “It often happens where one neighbor got a rain garden, and they decided to be rain garden evangelists,” says Beebe. “So then you see three or four rain gardens pop up.”

Neighbors also respond positively to any sign, literal or otherwise, that your plantings are intentional; many of my neighbors have inquired about the HSUS Humane Backyard program after seeing our sign peeking through a patch of milkweed. Validation by a third party helped Karish, who obtained city recognition of her yard’s water-saving features. “It made it very difficult for the HOA to overturn what the city thought was a great thing.”

Through the California Native Plant Society’s annual garden tour, residents can see the power of wildlife-friendly planting, which Merlo first observed after converting her own landscape. Before she could even get sage and milkweed in the ground, hummingbirds and monarchs covered the plants. “They show up within minutes of bringing natives to your yard,” she says.

An HOA rule change often requires near-universal acceptance by homeowners—yet another good reason to be neighborly. For Karish, the way to her neighbors’ hearts and minds was through their stomachs. “At Thanksgiving, everybody got sweet potatoes from my garden,” she says. “All the kids in the neighborhood came and helped me dig them up.”

HOA members should also consider joining the board and helping to educate its members. “Change starts from within,” says Karish. “The boards are [made up of] people just like you and me.”