About the Canadian seal hunt

Canada's annual commercial seal hunt is the largest slaughter of marine mammals on the planet. Facing harsh criticism the world over because of the hunt's cruelty and unsustainability, the Canadian government and fishing industry have spread much misinformation. Here are the basic facts about the hunt.

1. Which seals are targeted by Canada's seal hunt?

Harp seals are the primary target of the commercial seal hunt, and to a much smaller extent, hooded seals are also killed. Fully 97 percent of the harp seals killed are pups under just three months of age.

2. Where are the seals killed? 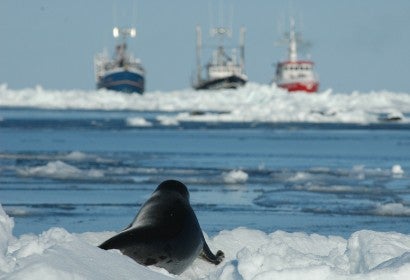 Canada's commercial seal hunt occurs on the ice floes off Canada's East Coast in two areas: the Gulf of St. Lawrence (west of Newfoundland and east of the Magdalen Islands) and the "Front" (northeast of Newfoundland).

3. Who kills seals and why?

Sealing is an off-season activity conducted by fishermen from Canada's East Coast. They make, on average, a small fraction of their annual incomes from sealing—and the rest from commercial fisheries. Even in Newfoundland, where most sealers live, the government estimates there are less than 6,000 fishermen who actively participate in the seal hunt each year—less than one percent of the provincial population.

4. How are the seals killed?

The Canadian Marine Mammal Regulations that govern the hunt stipulate sealers may kill seals with wooden clubs, hakapiks (large ice-pick-like clubs) and guns. In the Gulf of St. Lawrence, clubs and hakapiks are the killing implement of choice, and in the Front, guns are more widely used (though clubs are frequently used at the Front to kill seals that have been shot and wounded).

It is important to note that each killing method is demonstrably cruel. Because sealers shoot at seals from moving boats, the pups are often only wounded. The main sealskin processing plant in Canada deducts $2 from the price they pay for the skins for each bullet hole they find—therefore sealers are loath to shoot seals more than once. As a result, wounded seals are often left to suffer in agony—many slip beneath the surface of the water where they die slowly and are never recovered.

Yes. It is notable that in the 50 years Canada’s commercial seal hunt has been the subject of consistent veterinary scrutiny, not one report has ever suggested the seal hunt is acceptably humane. A 2007 review by Dr. Mary Richardson, a Canadian veterinary expert in humane slaughter methods, concluded that the commercial seal hunt is inherently inhumane because of the environment in which it operates and the speed at which the killing must be conducted. Also in 2007, a report by an international team of veterinary and zoology experts who studied the hunt concluded that both clubbing and shooting of seals in Canada are inhumane and should be prohibited. The report noted a general failure to comply with regulations by sealers and a failure to enforce the regulations by authorities.

Similarly, in 2001, a report by an independent team of veterinarians who studied the hunt concluded that governmental regulations regarding humane killing were neither being respected nor enforced, and that the seal hunt failed to comply with Canada's basic animal welfare standards. Shockingly, the veterinarians found that in 42 percent of the cases they studied, there was not enough evidence of cranial injury to even guarantee unconsciousness at the time of skinning.

Parliamentarians, journalists and scientists who observe Canada's commercial seal hunt each year continue to report unacceptable levels of cruelty, including sealers dragging conscious seals across the ice floes with boat hooks, shooting seals and leaving them to suffer in agony, stockpiling dead and dying animals and cutting open live seals.

6. How many seals are killed each year?

In recent years, hundreds of thousands of seals have been killed annually in the commercial seal hunt. More than  one million seals have been slaughtered in the past five years alone. These kill levels are among the highest witnessed in Canada in half a century. The last time seals were killed at this rate—in the 1950s and '60s—the harp seal population was reduced by as much as two-thirds.

Moreover, the actual number of seals killed is likely higher than the number reported. Many seals are shot at and injured in the course of the hunt and studies suggest that a significant number of these animals slip beneath the surface of the water, where they die slowly and are never recovered.

7. Are there any penalties when hunters exceed the government's quota?

No. In 2002, the Canadian government knowingly allowed sealers to exceed the quota by more than 37,000 animals. Sealers had already killed substantially more than the quota allowed by May 15 (the regulated closing date of the seal hunt) and yet the Minister of Fisheries and Oceans chose to extend the sealing season until June. In 2004, sealers killed close to 16,000 seals more than the permitted quota. Again, the Minister of Fisheries and Oceans extended the sealing season until well into June.

8. What products are made from seals?

Seals are killed primarily for their fur, which is used to produce fashion garments and other items. There is a small market for seal oil (both for industrial purposes and for human consumption) and seal penises have been sold in Asian markets as an aphrodisiac. There is almost no market for the meat, so seal carcasses are normally left to rot on the ice. Senior Canadian government representatives define the seal slaughter as “primarily a fur hunt.”

9. Is the seal hunt economically important?

Sealing is an off-season activity conducted by fishermen from Canada's East Coast. They make, on average, one-twentieth of their incomes from seal hunting and the rest from commercial fisheries. Even in Newfoundland, where most sealers live, income from the hunt accounts for less than one percent of the province's economy and less than two percent of the landed value of the fishery. According to the Newfoundland government, out of a population of half a million people, less than 6,000 fishermen participate in the seal hunt each year.

The Canadian government could easily shut down the seal hunt and replace it with economic alternatives should it choose to do so. One solution, which is supported by both animal protection groups and sealers, is a federal buyout of the commercial sealing industry. This program would involve the federal government “buying back” sealing licenses from fishermen—compensating them for lost revenue in the wake of the closure of the slaughter. Such a plan would be coupled with an investment in developing economic alternatives for the communities affected.

Fishing industry buyouts are nothing new to the Canadian government; over $4 billion has been spent on Canada’s east coast on buyouts and alternative economic development plans in recent years. When Canada ended its commercial whale hunt, it compensated whale hunters for their licenses in a similar fashion. One potential industry for the federal government to develop in place of seal hunting is marine ecotourism, including seal watching. In the Magdalen Islands, one of Canada’s sealing areas, seal watching now brings in more money to local communities than seal hunting does.

10. Does the government subsidize the hunt?

Yes. According to reports from the Canadian Institute for Business and the Environment, more than $20 million in subsidies were provided to the sealing industry between 1995 and 2001. Those subsidies came from entities such as the Atlantic Canada Opportunities Agency, Human Resources Development Council and Canada Economic Development–Quebec. These subsidies take a variety of forms, including funding the salaries for seal processing plant workers, market research and development trips and capital acquisitions for processing plants. In 2004, more than $400,000 was provided by the Canadian government to companies for the development of seal products.

In recent years, millions of dollars have been spent on ice-breaking for the sealing vessels and search and rescue of sealing crews by the Canadian Coast Guard—all at taxpayers’ expense. In 2009, the Canadian government estimated that enforcement of the Marine Mammal Regulations cost between $1.8 and $3.6 million—for an industry that brought in less than $1.5 million that year. The Canadian government also commits considerable resources each year to lobbying foreign governments on behalf of the sealing industry, including overseas flights and accommodations for lobbyists.

Moreover, Canada's commercial seal hunt is also indirectly subsidized by the Norwegian government. A Norwegian company purchases close to 80% of the sealskins produced in Canada in any given year through its Canadian subsidiary. These skins are shipped in an unprocessed state directly to Norway, where they are tanned and re-exported. The Norwegian government provides significant financial assistance to this company each year.

11. Is it true seals are jeopardizing the Canadian cod fishery?

There is no evidence to support this contention. Some fishing industry lobby groups try to claim that seals must be culled to protect fish stocks, but nothing could be further from the truth.

The scientific community agrees that the true cause of the depletion of fish stocks off Canada's East Coast is human over-fishing. Blaming seals for disappearing fish is a convenient way for the fishing industry to divert attention from its irresponsible and environmentally destructive practices that continue today.

In truth, seals, like all marine mammals, are a vital part of the ecosystem of the Northwest Atlantic. Harp seals, which are the primary target of the hunt, are opportunistic feeders, meaning they eat many different species. So while approximately three percent of a harp seal's diet may be commercially fished cod, harp seals also eat many significant predators of cod, such as squid. That is why some scientists are concerned that culling harp seals could further inhibit recovery of commercially valuable fish stocks in the Northwest Atlantic.

No. While the harp seal population in the Northwest Atlantic is the world's largest; it is a migratory population that spans the distance between Canada and Greenland and is supposed to number in the many millions.

In the 1950s and '60s, over-hunting reduced the harp seal population by as much as two-thirds. By the early 1970s, senior Canadian government scientists were warning that the population could be lost altogether if commercial sealing was not suspended for at least a decade.

In the early 1980s, the European Union banned the import of whitecoat seal skins, effectively removing the principal market for the hunt at the time. For the next decade, the numbers of seals killed in the hunt dramatically declined and the harp seal population began to recover.

But in the 1990s, the Canadian government rejuvenated the commercial seal hunt through massive subsidies. And with nearly one million seal pups killed in the past five years alone, we can only wonder what the impact will be on the harp seal population in coming years. Scientists have already sounded the alarm regarding the poor science used by the Canadian government to set quotas for the number of seals killed.