The facts about cockfighting

Alex Gallardo
/
For The HSUS

Cockfighting is an age-old practice in which two or more specially bred birds, known as gamecocks, are placed in an enclosed pit to fight for the primary purposes of gambling and entertainment. A typical cockfight can last anywhere from several minutes to more than half an hour and usually results in the death of one or both birds. 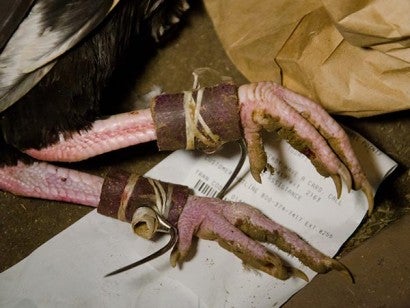 Even birds who aren't killed during cockfights suffer terribly. Most roosters on a gamefowl farm live tied to a stake, barrel or small wooden hut. They are often injected with steroids and adrenaline boosting drugs and, for two to three weeks prior to a fight, are kept in a small dark box to isolate them from other animals and deprive them of stimuli and natural behavior.

Regardless of how exhausted or injured they become during a fight, the birds cannot escape from the fighting pit. Common injuries include punctured lungs, broken bones and pierced eyes, yet they are forced to continue to fight. The razor-sharp steel blades or "gaffs" (which resemble 3-inch-long, curved ice picks) tied to the birds' legs are so sharp and dangerous that cockfighters themselves have been killed when accidentally slashed by their own birds.

As federal and state law enforcement can attest, cockfights are often associated with other criminal activities such as illegal gambling, drug trafficking, gang activity and illegal weapon sales. Federal investigations have uncovered international drug cartels running sophisticated cockfighting operations as a means to distribute heroin, cocaine, methamphetamine and opioids across the United States. 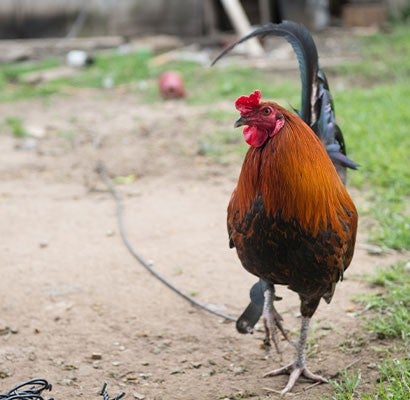 Gambling is the norm at cockfights and the primary reason the fights occur. Thousands of dollars can exchange hands as spectators and animal owners wager on the fate of the birds. Because of the large sums of money involved, cockfight-related assaults, home invasions and even murders are not uncommon. Cockfight derbies often attract hundreds of people engaging in a range of criminal activity which creates a dangerous situation for law enforcement officers, residents of the community and all involved.

The presence of children at these events is particularly disturbing—some parents make cockfights a family event, bringing picnic blankets and lunch which normalizes violence and teaches children to tolerate, and even celebrate, the suffering of animals.

While birds will fight over food, territory or mates, such fights are generally only to establish dominance within a group (the pecking order) and seldom result in serious injury. This natural behavior is quite different from what happens in staged cockfights, where the animal’s will to survive is exploited. Winning gamebirds are a result of artificial selection—intentionally bred for maximum aggression.

Cockfights are part of our culture/heritage

While it is true that cockfighting has been practiced for centuries in various countries, including the United States, "old" does not necessarily mean right or even acceptable. Heritage cannot be a defense for inexcusable, intentional abuse for the sake of entertainment. Cockfights are centered on animal suffering and apologists try to dress it up as tradition to disguise and excuse the egregious cruelty they inflict. By passing strong laws against animal fighting, federal and state governments have declared that it no longer has a place in our society.

Cockfights and the spread of disease

Those who raise and sell roosters for fighting maintain hundreds, sometimes thousands, of birds—creating an ideal environment for the spread of disease.  Birds are regularly sold and transported across state lines to fight in bloody cockfighting matches with no regulation or oversight. The fights themselves involve uniquely unsanitary practices such as cockfighters handling bloody, mutilated birds and putting their mouths over injured roosters’ beaks to suck fluids from their airways.

How the HSUS combats cockfighting 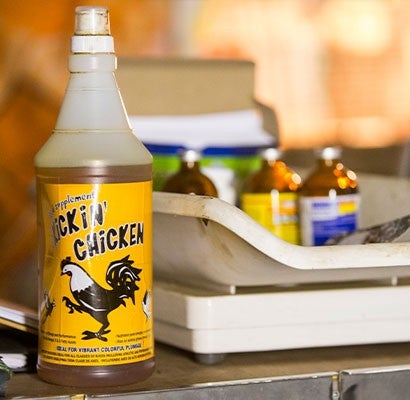 We have worked for decades to change the legal landscape for roosters who are the victims of fighting, but our work is not done.

As of 2021, cockfighting is a crime in every state and 42 states penalize it as a felony. It is illegal to be a spectator at fights in 43 states, possess or sell birds for fighting in 39 states and to possess animal fighting paraphernalia in 29 states. Only five states specifically prohibit adults from taking a child to a fight.

Over the past 20 years, the HSUS has worked with Congress and our allies to upgrade the federal Animal Fighting Prohibition Act five times—including making it a federal crime to attend a cockfight, bring a child to one or transport birds across states lines for fighting—including shipping birds through the U.S. Postal Service. Most recently, we fought against severe opposition to pass a bill clarifying that the law applies to all U.S. territories.

The HSUS gives law enforcement the tools they need to go after cockfighters. We have partnered with the National Sheriffs Association to train thousands of local officers nationwide on how to investigate animal fighting crimes. We also host trainings with the FBI and Department of Justice to train federal agents and prosecutors.

The HSUS’s Animal Rescue Team's animal fighting experts routinely work with the U.S. Department of Justice—agencies such as the USDA Office of Inspector General (OIG), FBI, U.S. Marshalls and Department of Homeland Security who participate in cockfighting investigations and raids. Our professional investigators provide intelligence on cockfighters and their operations, connect them with confidential informants, pay rewards for information that leads to prosecution and respond to assist with evidence collection and animal care in some circumstances. Additionally, our animal fighting investigators are court-certified experts in state and federal courts, and we routinely provide expert opinions to assist in prosecutions.

How you can help

Learn how to spot the signs of animal fighting. If you suspect rooster fighting activity, alert your local law enforcement agency and urge officials to contact the HSUS for practical tools, advice and assistance. Cockfights are most prevalent in states with weak penalties, so if you live in one of the states where possessing and selling birds for fighting or being a spectator at a cockfight is still legal, please contact your state legislators and urge them to bring the cockfighting law in line with the state’s dogfighting law.