What it takes to care for a tiger, and why they shouldn’t be pets
BY Brianna Grant
Photography by Meredith Lee
Share

After being rescued from the private pet trade, India came to live at Black Beauty Ranch, where he loves splashing in the water and playing with tiger-appropriate toys.
Meredith Lee
/
The HSUS

India leaps into his pool, pouncing on a purple plastic egg—his favorite toy, according to his caregivers. After a few minutes, the tiger ambles over to his watering tub. Instead of taking a drink, he plops in and closes his eyes in contentment. Although he’s young—roughly 10 months old on this June day—the massive paws hanging over his tub are a reminder of how strong he already is and how much larger he will become.

With room to roam and places to swim, India has lived a dramatically different life over the past few months than the one he used to know. Before his May arrival at the Humane Society of the United States’ Black Beauty Ranch in Murchison, Texas, India was kept as a pet in a private home. Many details of his prior life are unknown, but videos of people bottle-feeding him and the bejeweled collar he wore when he was rescued indicate how different his life was from that of wild tigers—and his life at the sanctuary.

Countless tigers like India live in roadside zoos, circuses, and private homes across the country. No one knows exactly how many captive tigers there are in America, as no federal agency keeps track of these animals. The vast majority of these tigers spend their lives in cruel conditions where they cannot express their natural behaviors. Although private owners and roadside zoos may claim their captive tigers help conservation efforts, these animals are usually habituated to humans and unlikely to survive if ever released into the wild. Many tigers are crossbred between subspecies who would not interbreed in the wild.

They’re adorable when they are young, but they’re wild animals. They don’t belong in the public’s hands.

In March 2020, the captive tiger problem gained mainstream attention with the Netflix series Tiger King, which followed the antics of U.S. roadside zoo operators. As the show’s human stars gained notoriety due to their eccentric personalities, animal advocates warned that the series glossed over the abuse endured by the big cats at these zoos.

More than a year later, many of the operators featured in Tiger King are now facing legal troubles for mistreating their animals, and viewers of the series are seeing the dark side of private tiger ownership: So far in 2021, authorities have seized three pet tigers from Texas neighborhoods.

Among them was India, rescued by authorities in May after a viral video showed the tiger wandering the streets of Houston. Just a few months earlier, Elsa was seized by the Bexar County Sheriff’s Office after deputies responded to a call about a crying animal and found the 6-month-old tiger living in an outdoor cage in freezing temperatures. She was wearing a harness and had rubbed her forehead raw on the bars. Elsa also found a permanent home at Black Beauty Ranch (“A home for Elsa,” Summer 2021).

With the two newcomers, the sanctuary is now home to three tigers rescued from the pet trade. Loki arrived first, in February 2019, after being found in an abandoned Houston home, living in a cage so small he could barely move (“The tiger next door,” September/October 2019). 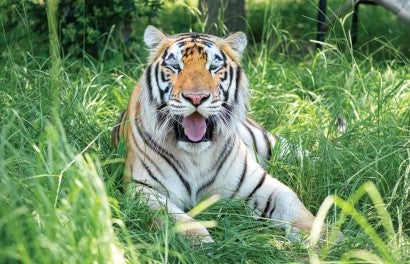 True to his name, Loki loves to cause a little mischief at Black Beauty Ranch.

“Most people think it is ridiculous to have a tiger in somebody’s house, but you wouldn’t have heard about it before,” Almrud says. Now, though, “it’s hitting the news and people are appropriately outraged.”

What people don’t always see is the behind-the-scenes work that happens even after a tiger is rescued. Caring for tigers requires advanced expertise and resources that are nearly impossible for private owners to replicate. Almrud estimates that a single tiger’s care—including veterinary services, food, enrichment and more—costs the sanctuary $25,000 a year.

Most private owners don’t provide veterinary care, says Dr. Debbie Myers, director of veterinary medicine at Black Beauty Ranch, and some even subject their tigers to painful claw or tooth removals in a misguided and unsuccessful attempt to make them safer to handle. And most people don’t know what tigers need to stay healthy, such as parasite prevention. India arrived at the sanctuary with a host of parasites. He, along with Elsa and Loki, now receive routine preventative medication.

400 lbs.
The average weight of an adult male Bengal tiger

Tigers rescued from the pet trade often suffer health issues such as malnourishment and metabolic bone disease, say sanctuary staff. Owners generally buy food that is inexpensive and easily accessible—such as meat from chickens or domestic cat food—but lacks essential nutrients. At the sanctuary, the young tigers—India and Elsa—are fed twice daily to help them grow. When they reach adulthood, they will eat almost 3,000 pounds of food a year on a schedule modeled after wild tigers’ dietary behaviors.

In the wild, tigers roam expansive ranges. As pets, tigers are crammed into homes, forced to engage in unnatural behaviors such as cuddling with humans and walking on a leash.

“When people own them, they’re interacting with them all the time and they want them to essentially be a dog for them, and that’s just never going to work out,” Myers says.

Tim Harrison, director of Outreach for Animals in Ohio and a former public safety officer, has assisted in rescuing, relocating and providing care for over 1,000 big cats kept as pets. He says most people get a tiger without thinking through the long-term care the animal will need. “Everybody wants a tiger cub, but nobody wants a tiger,” Harrison says. Many tigers end up in cages when they grow older and more dangerous.

When Loki first arrived at the sanctuary, he was skittish and timid, likely because he was kept in a cage with little stimulation. He was scared of sounds like the wind blowing and the rustling of leaves. He didn’t know how to climb and was afraid to go into his pool. Now, more than two years after his rescue, he has become a confident and independent tiger. The pool is one of his favorite spots and he can often be found lounging on his platform.

When India arrived at the sanctuary, he played in the grass and pool for over an hour straight, only stopping after he wore himself out.

“Once he got out into his yard, it’s like he realized, ‘this is what I was meant to do. This is what a tiger is meant to be,’ ” says Christi Gilbreth, senior animal caregiver at Black Beauty Ranch. In his expansive enclosure, India is strengthening his muscles and exploring natural tiger behaviors.

As pets, the tigers’ lives revolved around the desires of humans. At the sanctuary, humans cater to their species-specific needs—and individual personalities.

One way they do this is through the tigers’ enrichment. Loki enjoys playing with toys in his pool, so the caregivers set them up along his waterfall. Elsa and India have lots of youthful energy, and caregivers provide them with toys that move around and encourage play—including India’s purple plastic egg, which is lightweight enough for him to toss around but sturdy enough to withstand his pounces.

Caregivers monitor the tigers daily to ensure their physical and psychological needs are met. The tigers have multilevel platforms for exploring, pools for swimming and cooling down, and trees surrounded by long grass for stalking. Every week staff change out their toys to prevent boredom.

“While we’d love for them to be in the wild, we give them the next best thing,” says Gilbreth.

India, Elsa and Loki are the lucky ones. They have been rescued and live in sanctuary—but only because they lived in areas where it’s illegal to own tigers. “You don’t hear about the ones who are housed in most parts of Texas where it is completely legal to have them,” says Almrud.

Texas has no state law banning the private possession of tigers. The state requires owners to register their tigers, but many don’t. Some counties have enacted bans, but others have lax or no regulation. The HSUS tries every legislative session to pass a ban on the private possession of dangerous wild animals, like tigers, but despite bipartisan support from legislators, cities, law enforcement and the Texas Animal Control Association, the Texas legislature has failed to pass this vital legislation. Across the country, 35 states ban the private possession of big cats and the HSUS is working to pass state and local laws in areas where it is still allowed. There have been some wins; Nevada recently passed a ban on public contact with dangerous wild animals, such as tigers. 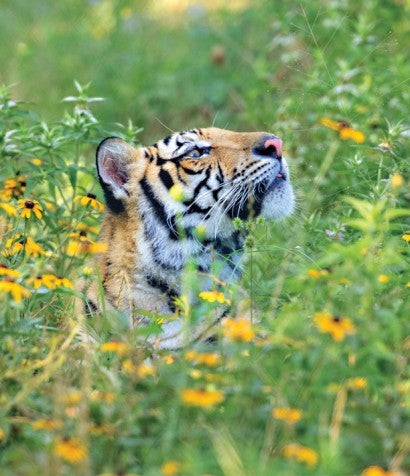 Almrud notes that a federal ban on the private possession of tigers is crucial because states like Texas are reluctant to act on their own. The HSUS and other advocates are fighting to pass the Big Cat Public Safety Act, which would ban the private possession of big cats and direct contact between the public and big cats. The bill was first introduced in 2012, and Jocelyn Ziemian, senior legislative specialist at the Humane Society Legislative Fund, is hopeful it will pass this session. It passed the House for the first time last year, and increased public awareness has put pressure on legislators to act. In lobbying meetings, Ziemian uses the sanctuary’s three tigers as examples of how commonplace these dangerous wild animals are in the United States.

India, Elsa and Loki were all rescued without incident, but that doesn’t always happen. A scared tiger can injure or kill someone or end up being shot by responders. Most police departments don’t have the equipment and training needed to handle a loose tiger, Harrison says. In his experience, neighbors often have no clue they’re living next door to a tiger until a dangerous incident occurs. According to data compiled by the HSUS, 19 adults and five children have been killed—and more than 300 people have been injured—by captive big cats in the U.S. since 1990.

“They’re predators,” Almrud says. “They’re adorable when they are young, but they’re wild animals. They don’t belong in the public’s hands.”

At 170 pounds, India is still growing. Soon he will become an imposing adult tiger. Although he will probably retain his enthusiasm for his egg toys, he will still be a wild animal. In his enclosure at the sanctuary, he is protected from the public—and the public is protected from him.