First, do no harm

Of all the surprising twists and turns my venture into the world of wildlife gardening has taken, the one that stands out most is the day I learned about the dark side of my favorite symbol of hope and summer: the sunflower.

It was in the early 2000s and the fledgling gardens at my new home were just coming into bloom. After years of cultivating smaller potted plants on an apartment balcony, I could hardly wait to see the happy yellow faces of these garden giants burst forth.

Much to my dismay at the time, the sawfly larvae could hardly wait either. An online search to identify the tiny green worm and find a solution led to an unexpected discovery: a white paper describing the killing of native birds to save sunflower seeds grown, in part, for backyard bird feeders. Red-winged blackbirds, grackles and other blackbird species were descending on fields of commercially grown sunflowers just as the seeds were ready for harvest. And the growers and the federal government weren’t happy about it.

Referred to as pests by the National Sunflower Association, blackbirds have been subjected over the past several decades to harassment, shootings, experimental poisoning programs and chemical spraying of their roosting sites. All for the crime of daring to feed themselves.

The more I researched the connection between sunflower crops and blackbird killings, the more I realized that the issue is complicated, extending well beyond bird food. A small percentage of the overall yield ends up in birdseed bags; far more makes its way into sunflower oil and seeds for human consumption. And the problem isn’t limited to sunflowers. When any crop is grown in sweeping monocultures, animals often lose; witness the plight of the monarch butterfly, whose once vast swaths of milkweed habitat along the edges of farmlands have been decimated by weed killer within just a few years.

Of course, not everyone thinks of the animals who dine on nature’s bounty and raise their babies in its welcoming habitats as symbols of economic loss. Some farmers have found ways to accommodate or gently deter the wild creatures visiting their lands. And government and university scientists continue to research nonlethal alternatives, including the growth of “decoy fields” set aside for hungry birds.

Still, lethal wildlife control continues to this day, in spite of ever-growing environmental threats to animals. Blackbird detractors point out that they are among the most common species in North America. But so were the passenger pigeons, who filled the skies by the billions only 50 years before the species was reduced to one lone survivor, Martha, at the Cincinnati Zoo. The 100-year anniversary of her death was solemnly commemorated in September with renewed calls for protection of native birds. As noted in The State of the Birds 2014 report, published by a consortium of public and private entities, “keeping common birds common, while we still can, is as important as preventing extinctions of rare species.” Among those common birds in steep decline, according to the report, are two blackbird species.

The sunflower-blackbird conflict has given me much to think about over the years. As an animal lover and environmentalist, I recognize that my role in the ecosystem and free market will always be fraught with contradiction. As long as I’m eating products with sunflower oil or buying corn and rice and other foods birds love, I can’t deny my contribution to the problem. But just because it’s not possible to live purely doesn’t mean we can’t all do our part to mitigate the damage. In the case of backyard wildlife, I’d rather not contribute to the sad irony of feeding birds foods that may have been grown at the expense of their brethren thousands of miles away. 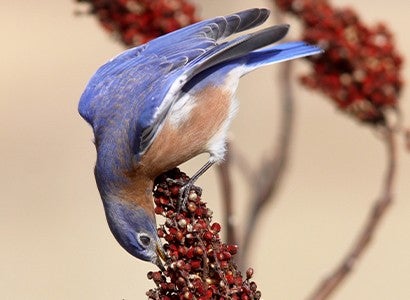 You don’t need a feeder to fill birds’ bellies. You can lay out a feast by growing native plants like this sumac. Planting bird food is a natural alternative to purchasing sunflower seed and other commercial crops where lethal wildlife control has sometimes been used to protect harvests.
Uhlman
/
Alamy Stock Photo

So where does that leave the humane gardener or avid birdwatcher? For starters, it helps to know that every garden, no matter the size, can be filled with plants that provide sustenance to birds the natural way. From coneflowers and sunflowers to winterberry hollies and oak trees, many species offer seeds and berries and serve as magnets for the insects that birds love.

The more spaces you fill with native plants, the less your feathered friends will rely on handouts from feeders. And many avian experts say that bird feeding is largely unnecessary, often advocating for limiting feeding to wintertime, particularly during heavy snows that obscure access to natural food sources. (It’s important to note that once you start feeding in winter, birds can develop a reliance on you, especially in rural areas of northern climates, where feeders are fewer and farther between. “If you go away for two weeks, you’re really compromising those birds,” says HSUS senior scientist John Hadidian, who advises asking a neighbor to take care of feeders.)

In addition to restricting feeding times to the cold season, you can reduce or eliminate purchases of commercial bird food by making your own. DIY mixtures can also help humane-minded gardeners avoid beef suet, a byproduct of factory farming, in favor of other fat sources such as peanut butter and vegetable suet.

Sunflowers carry a more complicated meaning for me now, but the animals thriving in my backyard are better for the knowledge gained. Even my approach to the sawfly larvae who feasted on that first garden has changed. I’ve since learned that it’s often best just to let the ecological community take care of itself—that enduring a few losses can lead to a more beautiful, sustainable and life-giving landscape in the long term.