They were like moths to a flame or, more accurately, butterflies to a native plant. No sooner had I unloaded two joe-pye weed perennials from my car last August than three tiger swallowtails dive-bombed the pots, as if to validate my purchase.

If only my fellow shoppers knew what they were missing, I thought, as the winged beauties treated themselves to fresh nectar. I couldn’t help but wonder why any gardener would choose showy but short-lived exotics over these life-sustaining species.

But it wasn’t long before I wished I’d taken a pass too, during my trip to the local big-box garden center. Originally intending to bring sustenance to bees and butterflies at a time when summer’s glory was starting to wane, I was alarmed by a new report indicating that my purchases may have the opposite effect.

The problem, according to the pilot study by Friends of the Earth, is the pervasive use of neonicotinoids (neonics). Like other systemic insecticides, this class of synthetics is more than just a surface-based killer; once applied, the chemicals become part of the plant’s vascular system and can endure in the soil for months. Used widely on crops, they have been shown to kill or harm species from bees to butterflies to amphibians to birds. Even low doses can impair bees’ immune systems, reproduction and foraging ability.

Of the plants tested from major retailers, more than half contained neonics, now considered a key factor in bee die-offs. While the European Commission has instituted a two-year suspension on the use of three neonicotinoid pesticides, “we’re really slow to act here in the U.S., and the EPA has been ignoring a proven body of science telling us this is a problem,” says Lisa Archer, director of food and technology at Friends of the Earth U.S. And as the agency continues to defer the issue pending further study, bees keep dying; one mass kill last summer in Oregon prompted the introduction of the Saving America’s Pollinators Act.

So what’s a humane-minded gardener to do? Among the alternatives: You can buy from organic nurseries, visit farmers markets and verify their cultivation practices, and urge garden centers to be vigilant of suppliers.

But to truly know what you’re offering backyard friends, get as close to the source as possible—by growing plants from seed. It’s not as difficult as you might think. The modern-day myth of the “green thumb” has turned a natural process into something seemingly mystical, but plants grew long before our species roamed the earth—without all the synthetic chemicals introduced in the 20th century. Here are a few tips for success.

Obtain only organic seeds at garden centers or through in-person or online seed exchanges. My go-to source for vegetables and annuals is Seeds of Change, but even many conventional suppliers now sell untreated products.

I typically purchase organic seed-starting mix and then add compost. But while this produces healthy plants, many commercial mixes contain peat that’s harvested from sensitive bogs as well as animal byproducts of factory farming. Even the sustainability of alternatives such as coir (coconut dust) has been questioned. I usually opt for the least of all evils, but this year I may make my own seed-starting mix; one intriguing online recipe includes compost, loam, decayed leaves, sharp sand, and seaweed meal.

If you start a month before your last frost date and don’t mind planting small seedlings, a sunny spot near a south-facing window is sufficient. For greater variety and more mature seedlings, light fixtures prevent spindly plants. Don’t bother with expensive grow systems; my seedlings thrive under 40-watt cool fluorescents that hang on chains from S-hooks draped over cheap wire shelving units. Keep plants no more than a couple inches from the light, lowering fluorescents or elevating seed trays on large books or other sturdy items.

Not Dry, Not Drowning

My first forays into seed-starting were made more frightening than necessary by warnings about damping-off disease, which kills seedlings overtaken by fungi in waterlogged soil. To prevent this, mix your medium enough that it’s not so soggy you can squeeze out water but not so dry it crumbles in your hands. Keep seeds covered until they sprout, moistening with a spray bottle or light streams of water poured through your hand. As the plants grow sturdier, they’ll withstand a gentle stream from a small watering can.

I’ve often used black plastic seed-starting trays, but the discovery of the ocean trash vortex known as the Great Pacific Garbage Patch gave me pause. Now, instead of adding to the problem, I recycle household items, such as margarine tubs, takeout containers, and soda bottles cut in half. I poke holes in the bottom for drainage and place the “pots” in any waterproof trays I can find—kitchen storage containers, Pyrex dishes, and the like.

Of course, you can always sow seeds directly in the ground, too, the way nature intended; many catch up quickly when planted just after the first frost. 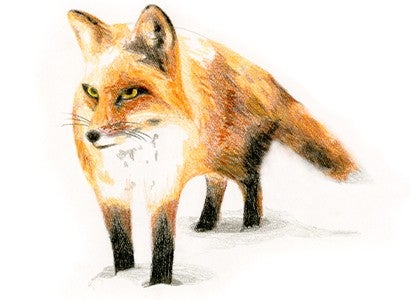 Most people think of spring as the season when love is in the air, but some species prefer to get a jumpstart on their courtships. Come January, raccoons, foxes, skunks, coyotes and other animals are on the move, searching for that special someone.

They’re also looking for a special place to raise a family. “We get callers who say, ‘I don’t know what’s going on in my attic. I called the police first. I’ve heard screaming and I don’t know what it is,’” says John Griffin, director of the HSUS’s Humane Wildlife Services. The typical culprits are raccoons who, having created a den site inside a home, are alarming residents with “that crazy vocalization they make during mating season,” says Griffin.

Foxes keep a lower profile during breeding season and skunk activity tends to be smelled rather than seen. Coyotes, however, are feeling territorial this time of year and may follow people walking large dogs, whom they may view as competition for mates. (Keep your dog on a leash no longer than 6 feet and the coyote will quickly realize that you’re just passing by.)

“Single and looking” is a stressful state. Add house hunting to the equation, and it’s easy to see why wild animals can find themselves in precarious situations this time of year. You can help by driving carefully to avoid animals on the roads and applying humane methods to solving wildlife conflicts.