A resting place for all

If she were human, Lucy might be commemorated this way, her life story etched in granite. She might take her place in a family plot beneath her favorite lookout, a weeping beech at Mount Auburn Cemetery in Cambridge, Massachusetts. She’d join an elite roster of underground inhabitants of the burial grounds, permanent home to such luminaries as Senator Henry Cabot Lodge and modern cookbook pioneer Fannie Farmer.

But Lucy is a red-tailed hawk with an elusive past, known primarily through camera lenses. Though she’s gone now, she has her own epitaph in photographs by John Harrison, who captured her nest-building prowess as she snapped off branches so thick they cracked like gunshots. Her visage is one of many animal close-ups gracing the pages of a new book about the nation’s first garden cemetery, where human families honor deceased loved ones while generations of wild animals seek food, shelter and nesting sites in verdant surroundings.

Edited by Harrison and fellow photographer Kim Nagy, Dead in Good Company offers an intimate view of Mount Auburn, weaving tales of lives ended with stories of those just beginning. Collectively, the contributing authors, historians, birders and scientists convey the sublime sensation of being a mere speck on a complicated, gorgeous planet. Add to the mix a heightened awareness of mortality inspired by gravestones of people who once had a vibrant presence above ground, and the effect is a palpable unburdening—a “calming magic,” as novelist Maryanne O’Hara calls it in her moving essay about a trip to the cemetery while her daughter awaited a lung transplant. 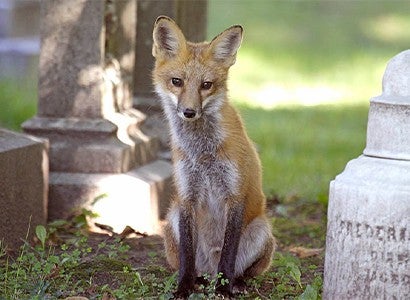 Intentionally established to embrace the cycle of life through naturalistic landscaping, Mount Auburn was ahead of its time, opening in 1831 before public parks even existed in the U.S. Its creation inspired future urban sanctuaries, including New York City’s Central Park. Though its founders were revolutionary in conceiving a respite from pollution and population density—and in devising an alternative to unsanitary burial grounds—they could not have known just how lifesaving the expansive green space would one day be for animals. Like Central Park, Mount Auburn is an important stopover for migratory birds, with 5,000 trees beckoning them to rest and refuel on their long journeys through otherwise paved landscapes.

Harrison didn’t always understand the cemetery’s tremendous value to wildlife either. A book distributor, he learned of its abundant life 16 years ago from professor and author Pierce Butler, who later contributed to the book. On his first visit, Harrison didn’t know what a warbler was and couldn’t name the Baltimore oriole he photographed. But the beauty of the gardens and their inhabitants captivated him, and in time he began to identify the animals not just by species but on more personal terms: There was Lucy, of course, but also great horned owls Alexander and Roxanne and coyote patriarch Big Caesar. In natural areas outside the cemetery, Harrison now follows the lives of Rocky the snowy owl and many others. But it was Mount Auburn that introduced him to the wonders of wildlife. “I don’t know what else I would be doing now that would so completely fill me with the passion that I have for them. I can’t get out of the door early enough to see them.”

Cemeteries may be particularly fertile ground for instilling such appreciation, commanding a quietness that parks with volleyball nets and swing sets never will. Surrounded by buildings and roads, the 175-acre “gated community” of Mount Auburn is especially conducive to Harrison’s uncommonly expressive imagery of animals like Big Caesar and his pups because, as he notes, even apex predators are sometimes more likely to stay put. Such habitat islands can present challenges for resident species in need of broader ranges, but they also dispel stereotypic views of nature as distant and separate.

In the end, their most important function now may be as a call to action, inspiring people to create wildlife corridors by connecting habitat fragments with more green spaces wherever possible—in corporate lawns and schoolyards, vacant lots and backyards. The towering canopies of Mount Auburn remind us of what’s been lost—but also what could be gained if we treat public and private land as lifesaving spaces for both humans and animals, replacing turfgrass and fear of nature with trees and understanding. As the contributors to Dead in Good Company make clear, we owe it to the animals—and ourselves—to try.

How to find nature—and yourself

When her mother’s mental state deteriorated, Kim Nagy found saving grace in watching another mother—a great horned owl—raise her babies at Mount Auburn Cemetery. Feeling unmoored, Nagy visited almost daily, observing the owlets’ sleepy yawns and wobbly attempts to push aside their mom’s feathers for air. “They inspired action in me by uplifting my spirit,” she writes in Dead in Good Company, “and they encouraged me to be cheerful merely because of their existence.”

Peering into these other lives changed her own. Now an avid birder and photographer traveling internationally, Nagy hopes the book she coedited with John Harrison will encourage engagement in broader conservation issues. “Let’s face it: The world’s on fire,” says Nagy, who works in natural product sales. “And you just think, what can one person do? One person can actually do a lot.”

To find natural inspiration, look for where the plants grow and the water flows. In the Midwest, some old cemeteries have been preserved because they support rare flora, having never been plowed or grazed. Discover other hidden gems through local guides and wildlife organizations, and use these tips to gain a quiet glimpse into the lives of animals in your own neighborhood.

Be in the moment

Lose the phone, says Nagy, who laments the tendency to tap away on devices “like a squirrel with a nut. We’re never where we are. And when you watch nature, you see what it is; you lose your judgment about what’s good and what’s bad. And it’s very beautiful, and it’s very peaceful. And to me it’s very real.” Observing animals in their element requires patience, says Harrison: “We think nothing of standing for an hour or two waiting for a raptor to take off.” Slowing down improves the chances of sighting fast-moving creatures; capturing a clear hummingbird photo requires a shutter speed of 1/5000 of a second. “At that moment, that hummingbird’s wings are frozen in time,” says Nagy. “So you can either focus on that or focus on the things you can’t control.”

“Let’s face it: The world’s on fire ... and you just think, what can one person do? One person can actually do a lot.”

To observant eyes, one spotted salamander is not the same as the next; each has a unique pattern, notes herpetology expert Joe Martinez in his essay about salamander surveys at Mount Auburn. To a birder with tuned-in ears, birdsong isn’t uniform either, explains retired HSUS scientist and fellow book contributor John Hadidian; each bird sings a slightly different tune. Study individual animals, advises Harrison, and you’ll absorb more than you would in a class or in a race to catalog species. People often ask why he shoots so many images of the same birds, but “every takeoff is a wonder to us,” he says. “The more you learn, the more familiar you become, the more you love these species.”

Let them teach you

By being open to suggestion, Harrison has learned to interpret signs of impending raptor takeoffs and time his morning arrivals to the awakening of coyote pups stretching among the tombstones. Watching male hawks and owls feed females and just-born chicks, he’s also come to admire animals’ parenting skills. “They just do their job, and it’s amazing to see that,” he says. “They have feelings in their own way, and they have expertise in their own way. I can’t imagine our planet without them.”