To experience the natural world, we often navigate congested highways to swim in the sea, fly over patchworked terrain to hike through preserved forests and climb distant mountaintops to catch rare views.

Largely because of our ever-increasing mobility, the areas nearest to us are rarely the dearest—and all too easy to dismiss as familiar ground.

But how familiar are we, really, with what lies below, let alone who eats, sleeps and breeds there? Instead of traveling afar for a sense of place in the universe, what if we paid more attention to what’s right underfoot?

These questions are especially visceral once you’ve seen the seemingly solid earth shift next to you. More than once, I’ve been lost in thought in the garden when—in a flash so quick I question my eyes—the soil erupts into a tunnel just beneath the surface. 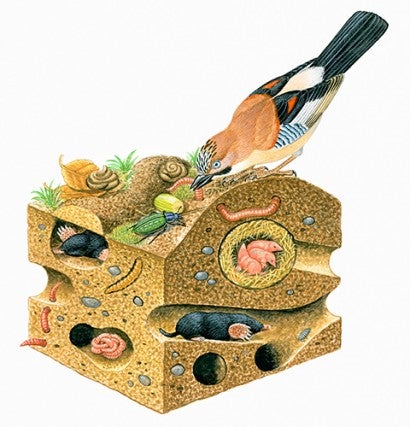 Born and raised in underground chambers and tunnels, moles find everything they need in their subterranean habitat. They rarely venture above ground.
©176/Ocean
/
Corbis

It’s a startling reminder that nothing is immutable, not even the ground we walk on. And the quiet movements of moles also convey a larger truth: Even the dirt outside our doorsteps is breathtakingly alive.

Over the centuries, many people have wished that weren’t so, with entire industries capitalizing on fears of the unknown. Pest control companies specialize in creating mountains of paranoia out of harmless molehills, hawking chemicals and medieval traps for killing creatures who live largely out of sight.

Yet there could hardly be a more unassuming creature than a mole. Industrious animals with an unrivaled work ethic, they don’t dig tunnels to tear up our lawns or eat our plants; contrary to popular belief, vegetation isn’t a mainstay of their diet.

Moles go about their subterranean construction work as if their lives depend on it for good reason: Their lives do depend on it. Eating more than half their body weight each day, moles dine on insects, earthworms and other invertebrates in the soil layers. Staying underground as much as possible also lowers risk of predation.

Often alternating labor-intensive tunneling with sleep in four-hour shifts, moles are stronger than human athletes, capable of lifting 20 times their own body weight, writes Rob Atkinson in his 2013 book Moles. “What they can achieve puts humans to shame,” he says, likening their prowess to the strength of a man pushing an elephant out of a tunnel with one hand in 20 minutes.

Long before he studied moles at Oxford, Atkinson viewed them as pests and trapped them during his youth in rural England. Moles have been subjected to even worse fates in the United Kingdom, he says, because of their relatively hidden existence. Until the practice was banned in 2006, vast numbers of moles suffered agonizing but invisible deaths by strychnine poisoning. “If you have foxes convulsing in city streets,” said Atkinson, “you would never get away with it.”

Brutal treatment of moles derives from a British obsession with unnaturally pristine lawns on royal estates. Adopted here with near-religious fervor, the attitude causes suffering for species whose habitats foil the artifice of turfgrass. In the U.S., gardeners have harassed the humble mole with things such as chemicals, broken glass and even gum. And moles are the target of so many games and jokes that violence toward them is still socially acceptable; a friend’s cousin posted a Facebook photo of a mole she’d stomped to death, much to the mirth of her followers.

Advice on killing moles is easier to come by than facts about their valuable role. As Atkinson notes, about six papers on moles are published annually, compared with thousands on primates. “These animals have been studied from the point of view of ‘Let’s get rid of them,’” says HSUS senior scientist John Hadidian, “so their natural history is a lot more obscure.”

Out of the scant research, however, has come information that should impress even the cynics: Not only do moles aerate our soil and dine on invasive Japanese beetle grubs, but they’re considered “ecosystem engineers” whose kicked-up dirt can create fertile ground for plants that host rare butterfly larvae. Molehill soil is also beneficial to savvy gardeners, who make use of it in pots and beds.

Though I’ve never experienced mole damage, humane solutions exist for homeowners who do. If moles are entering gardens, fencing grounded with L-shaped footers can be placed around the perimeter. And molehills can be harmlessly shoveled away.

The best approach is to understand who really inhabits our properties and to appreciate the miracle of their existence. Years ago when I came across the decapitated trunk and nibbled roots of a rosebush, I made the common mistake of assuming a mole had been munching. But my new guest was a plant-eating vole, who shares few traits with moles save their similar names. And as I would soon learn from my favorite book on backyard wildlife, Wild Neighbors (written by HSUS experts), the only animal I had to blame was myself. By piling on too much mulch, I had issued a gilded dinner invitation.

Instead of asking my backyard friends to amend their ways, I changed my own, thinning the mulch while admiring the vole’s beaver-like precision in honing my rosebush trunk to a spear. Within a year, the roots regenerated into a bush now taller than I am.

Elsewhere on the property, moles still tunnel, but the only evidence of their presence is a sponginess where the earth softens underfoot—a reminder that life is everywhere, growing and changing in the places we most tread but least often see.