Don’t fence them in

How to save wildlife from netting, pools and other death traps
BY Nancy Lawson
Share

It seemed like a good idea at the time: Buy a house with a two-acre property, let our energetic herding dog have the run of the place and spend blissful summer days digging side by side in the dirt with her.

And it was blissful, watching Mattie carve out her napping spots behind the ferns and tall grasses while I replaced our lifeless baked-clay lawn, one painstaking patch at a time, with plants that would eventually bring shelter and sustenance to wildlife.

It felt like a second chance too, after Mattie abandoned her longstanding policy of never leaving my side in favor of a deer chase that landed her lost in the woods for several hours. I thought I’d never see her again and, in short order, had a split-rail fence with chicken wire installed along our property’s perimeter.

Life after the fence seemed idyllic and safe, but little did my husband and I realize we had turned our property into an exclusive gated community where some animals could not find a way out and others never made it in. The error of our ways dawned on me after a terrified opossum had a standoff with our dog against the back fence and hapless box turtles tried to cross unsuccessfully into the next yard. More than once I had to call my neighbor to meet me at the fence line for reptilian handoffs. But what was happening when I wasn’t home to play the role of a merciful border patrol officer?

As is so often the case for many homeowners, there was no intention to do harm; we just didn’t know any better. Now that we are parents to a single ancient indoor cat and the crumbling fence has seen better days, we’re letting nature take the borders back. If we ever adopt another dog, we’ll likely fence in only a portion of the yard for her and leave the rest to wildlife.

We can all prevent supposedly animal-friendly landscaping methods from backfiring through careful product selection and monitoring. Here are a few tips.

Backyard gardeners often use nets to protect fruit and fish from hungry wildlife. But these can become dangerous traps for animals like the eastern rat snake brought last July to the Cape Wildlife Center in Barnstable, Mass. Entangled in landscape netting placed over a pond, the snake was extricated by a veterinarian, but many of these garden-friendly animals are not so lucky.

If you use netting, make sure it has very small holes, advises center director Deborah Millman. And don’t overreact by tugging or reshaping the netting if a snake is already moving through it, says director of wildlife rehabilitation Lynn Miller; you could accidentally inflict severe spinal injury. If a snake appears to be stuck after devouring, say, a fat mouse, it’s better to carefully cut around the whole area and lift the snake gently into a bucket to be transported to a rehab center.

Loose netting around fruit trees can also be an impossible barrier to other animals—birds who fly in through entry points at the bottom often can’t find their way out and die of dehydration. Avoid such calamities by tightly securing the edges. Check the netting daily to ensure animals aren’t trapped and consider visual barriers wherever possible, adding color or objects that alert animals to the presence of netting.

If you’ve constructed a pond in your yard, you’re probably aware of the importance of sloping the sides so animals can climb in and out. But what about swimming pools, with their slippery straight walls? At our house, this wonderful human habitat appears to help bats arriving at twilight for a drink and insect snacks, but it’s a minefield for unsuspecting frogs, mice and spiders. Fortunately, products such as Skamper-Ramps and FrogLogs offer angled getaways that attach to pool edges. For large pools, it’s best to install at least two at each end so wild swimmers don’t exhaust themselves before reaching these life preservers.

Backyard barbecues and picnics are treasured summer rituals, but we aren’t the only ones who like good party food. Salad dressing jars and other containers can trap the heads of foraging skunks and other critters, so pick them up, along with broken pots, empty bags, drying fish nets (if you live near the shore) and other potentially hazardous items.

Don’t be blinded by your birdfeeding passion

Sometimes the very creatures we’re trying to help are the ones who get hurt the most. Bird feeders with broken pieces or chipmunk-chewed holes can trap birds inside. When laying out a feast for your bird friends, use feeders with particularly large or small holes, advises Millman, whose staff had to extract the head of an ambitious squirrel stuck in a feeder.

In December, two songbird patients arrived at the Cape Wildlife Center after a well-meaning homeowner had rubbed axle grease on a bird feeder pole to keep squirrels away. Careful bathing and a month of care saved one chickadee who had lost her tail feathers, but the other died. “The guy with the bird feeder was really devastated,” says Millman. Instead of grease, petroleum jelly or glycerin—all of which can damage a bird’s waterproofing—try one of the many effective squirrel-baffling feeders on the market.

Of course, the best way to feed and shelter animals is to plant the native trees, bushes and flowers they have evolved with for millennia. A natural abundance of seeds, berries and caterpillars will do more for backyard birds than any buffet you can provide them—and will keep the unexpected dangers of artificial materials at bay. 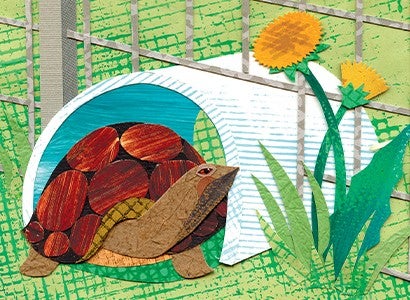 Fences provide privacy, give pets a safe place to roam and protect gardens from nibbling critters. But impassable borders can cause problems for wildlife.

Last summer, Jennifer Kunz at Duchess Sanctuary helped rescued a fawn entangled in a neighbor’s fence. The experience made Kunz worry about the Oregon sanctuary’s 4-foot-high grid-pattern fence. While the barrier is necessary to contain 188 rescued horses and prevent neighboring goats from breaking in, Kunz and HSUS wildlife expert Dave Pauli knew it could be a problem for wildlife traversing the 1,120-acre property. Because deer kick their hind legs when jumping, their hooves could easily catch in the space between the fence and the horizontal wire 2 inches above, explains Pauli.

In September, Pauli and sanctuary staff created six deer crossings by folding down fence sections and raising the top wire to widen the space. The deer would kick air rather than fence. Next they built more than a dozen small mammal and turtle crawl-unders from halved PVC piping; secured lean-to posts for mountain lions, bobcats and other climbers; and constructed an elevated log bridge for bears. A variety of tracks reveals that the new passages are well-traveled, and a remote camera has captured photos of a resident bruin by the bear bridge.